When we drive along the A92 motorway north of the province of Malaga, next to the town of Fuente de Piedra, we discover a floodplain surrounded by an agricultural landscape dominated by olive groves: the lagoon of Fuente de Piedra. It is the largest lagoon of Andalucia and is considered one of the most extensive and complex endorheic basins in Spain. Its uniqueness is determined by its size (6.8 km x 2.5 km) and the shallowness and the high salinity of its waters. This gives special significance from the standpoint of geological, hydro-geological, ecological, orníthological, cultural, educational and scientific entities. 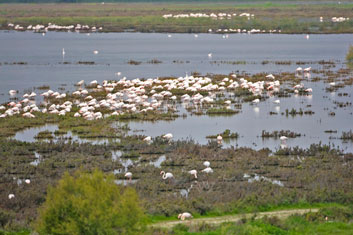 Its importance was recognized globally when in 1983 it was listed as Wetlands of International Importance (Ramsar Convention). A year later it became the first Wetland protected by the Parliament of Andalucía and Integral Reserve (Law 1/1984). In 1989 the Natural Reserve was renamed after its inclusion in the Protected Natural Areas Inventory of Andalucía (Law 2/1989, of July 18). It was also part of the European ecological network Natura 2000 from 1987, when it was designated as a Special Protection Area for Birds (SPA). The nature reserve occupies 1,554 hectares and its Peripheral Protection Zone covers an area of 6,689 hectares.

This is a temporary lagoon and its water level is determined by the Mediterranean climate, characterised by seasonal rainfall which usually are not abundant as average annual rainfall is 460 mm. Usually it is a flooded lagoon in autumn, peaking in spring, and drying up in summer. In addition, there is also a large variation in the annual distribution of rainfall, with rainy years in which the lagoon does not dry out, and low rainfall years during which it is dried out.
Rapidly changing environmental conditions determine the existence of communities of living things adapted to this environment, uniquely fluctuating,  among which are micro-organisms, vegetation and waterfowl. 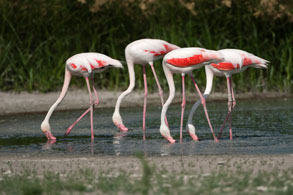 But if anything is internationally renowned, Fuente de Piedra constitutes the most important inland temporary lagoon in Europe for the Greater Flamingo. Each year as a result of the balance between precipitation and evaporation, the number of Flamingos in Fuente de Piedra fluctuates. In normal years there is a large concentration of flamingoes between February and July, with usually a peak of more than 30,000 birds in April. The wet years host more than 50,000 Flamingos from August to September. The Flamingos nest on the remains of the salt industry dikes, built in the late nineteenth century and have been eroded to form small islands. When the water level is very high, breeding colonies are established in the southwest Canchones sector where the natural islands of the lagoon are located. In the years when conditions are favourable La Laguna de Fuente de Piedra hosts the largest breeding colony of Greater Flamingos of the Mediterranean and northwest Africa, over 25,000 pairs and 15,000 chicks. 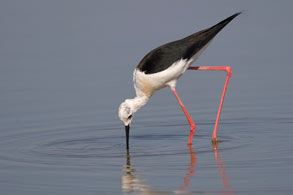 Its aquatic birds are very varied, both in quantity and in kind, as they are strongly influenced by the water level, salinity, duration of flooding and seasons. In dry years the water level is low and forms beaches that favour the presence of waders (Stilt, Kentish Plover, Avocet, etc). On the contrary, wetter years increase the presence of dabbling ducks (Mallard, Shoveler, amongst others) and if the water level is very high, more than one metre, diving species proliferate (Pochard, Great Crested Grebe, White-headed Duck, …) and of course the Flamingos that are always present in this wetland.
At the end of December 2012, Fuente de Piedra had a 96 cm water level, and thus had the characteristics of a wet year and flooded areas were distributed with about 10,000 ducks of different species (Shoveler, Teal, common Gadwall, Mallard and Shelduck), over 4,000 Flamingos and a variety of waders (Stilt, Avocet, Ringed Plovers, etc.), and over 40,000 gulls. In addition, 1,500 Common Cranes, from northern Europe can be seen on the farmland and at dusk heading to the lake to relax.  March 2013 was the wettest since records began in 1947, therefore the lagoon was far too full for Waders. By April 2013 the water returned to normal levels and this year is set to be one of the best for breeding birds. 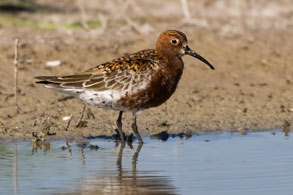 The Nature Reserve has the Visitor Center José Antonio Valverde, located in the Cerro del Palo, on the north shore of the lagoon and surrounded by scenic water. These facilities are the starting point to visit this unique lagoon, having two exhibition rooms, which show the characteristics and diversity of the Andalusian wetlands and the lagoon of Fuente de Piedra, of which there is also an audiovisual. There is a visitor seating area where you can have a coffee or a drink with a snack and a shop where you can buy a souvenir. It also offers rental of binoculars, audio guides, bicycles, and pushchairs for children. Additionally, the public can hire a guide service, which has a long-range, ground-based telescope, which is essential to closely observe all the variety of fauna of this unique lagoon.

This nature reserve has a network of trails, hides and viewpoints to provide the public a close contact with the lagoon. To this end, you can enjoy two footpaths, one medium and one short, and four observation balconies located in the vicinity of the lagoon These are accessed by following the marked routes. 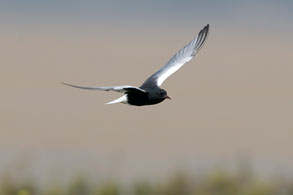 The Laguneto Trail, begins at the viewpoint of Cerro del Palo and ends at the People’s Laguneto (250 metres), it is adapted for disabled guests and has three hides that allow waterfowl observation.
Las Albinas Trail,  part of Palo Zero  runs through the area called “The Juncares”, has a length of 2.4 kilometres and runs along the northern sector of the lagoon, through the area containing  the streams, Santillan and Maria Fernandez, and ends at Vicares curve where there is an observatory and a hide. In addition, visitors can drive a journey of about 21 kilometres, which runs around the perimeter of the lagoon. The road runs along the Sierra de Mares paved farm tracks, ending in the town of Fuente de Piedra. This tour includes two stops, clearly marked, in the vicinity of the lagoon: the Vicarage, with a hide overlooking the northern sector of the lagoon and where, besides water birds, can be observed marsh vegetation consisting of a belt of reeds and halophile scrub (vegetation adapted to high salinity). This area is flooded in winter with contributions from Maria Fernandez Arroyo (a stream), conserving water until spring. 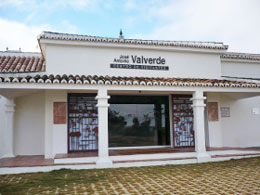 El Mirador de Cantarranas, allows you to enjoy the countryside scenery and the western sector of the lagoon of Fuente de Piedra, lagoon Cantarranas, which is part of this great wetland.
If you hire guide services in the Visitor Center, they may take you to the Cerro de las Latas, south of the lagoon, where there is located the only area of Mediterranean forest and oak adehesado of this wetland environment. This area enjoys a privileged panoramic view over the lagoon, where you can observe birds to the south and Canchones in the southwest, the only natural islets of this wetland, and the remains of infrastructure levees and canals built in the late XIX century for salt use.