It always comes as a surprise how nature compensates for annual weather fluctuations; things always seem to balance in timescale whatever the conditions. Bee-eaters, after a delayed arrival at their traditional breeding sites, made-up for any delay and were at about the same stage as they would have been in a ‘normal’ year. By the beginning of May, males and females were sat tight on their eggs only leaving to be fed by their industrious partners (only the female brood’s eggs and young at night). Study of their feeding technique always holds a fascination for me, their gentle flap, flap glide over open fields and flower studded embankments, make catching insects look deceptively easy. Of course the reality is anything but! Take a look at their long delicate bills and consider that they actually catch their prey only with the fine tip of their mandibles. The precision required for this method of catching insects is truly amazing. The prey is held in the tip of the bill and slowly turned so any sting is effectively distanced away from any softer parts of the bird. Returning to a favourite perch, the bird will then alternate between beating and rubbing the insect against the hard surface of the perch in order to remove the sting before enjoying a high protein snack. 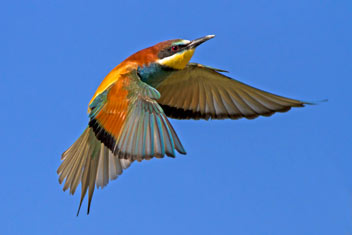 Our birds, Eurasian Bee-eater Merops apiaster, are one of 24 species of Bee-eaters with a mostly Old World distribution. They are sub-Sahara migrants and can reach as far south as the Transvaal in South Africa. Remarkably, given the extent of their winter migration, research has shown an 80% fidelity among breeding adults to their breeding sites here in Spain. Soon after returning to our area, the adults get down to pairing and start the arduous job of tunnelling into embankments, cliffs or even bare hillsides. The tunnel can range from around 0.75m to 2.5m deep (up to 3m has been recorded) and at its end the adults will create a nest chamber. Up to 38cm can be dug in one day and when completed a pile of fine earth can accumulate outside the entrance hole and this can weigh up to 7 or even 12kg. The process of egg laying, incubation and subsequent fledging of the hatchlings can take around 40 to sometimes 50 days! The wide differences of 10 days are normally associated with whether or not a pair has a ‘helper’ (a non breeding adult, possibly a sister or brother to one of the parent birds). Once the young leave the safety of the nest and the colonies have fledged their young, they leave for the southern migration to the tropical regions of Africa, a remarkable journey that will involve a non-stop flight over the Sahara and Arabian Deserts.

Personally I find our Bee-eater among the most glamorous and colourful of our birds and look forward to their return each year as much as I used to yearn for the Swallow’s return each spring in the UK. I love their friendly chatter and social behaviour, also their willingness to allow us to approach and watch them at close quarters. If you have an interest in further information on the nature of this area, please contact the Author.