Andalucía is one of the regions with the greatest biodiversity in the European continent, in both number of different species occurring in the area and the number of exclusive species, so its distribution in the world is limited to specific areas of our geography. We can find species which have either disappeared in other parts of Spain or the populations have decreased dramatically, this region being one of its last refuges.
Located in the northeast of the region, the province of Jaén, with a third of its territory designated as protected natural space, is the greenest of all Spain’s provinces. Here we can find some of the best nature in Andalucía, and by virtue of that, some of the best nature in Europe itself. In this sense, Jaén is a wonderful nature sanctuary for wildlife. It has an exceptional wealth of flora and fauna that have led to four Natural Parks, three Natural Areas and two Nature Reserves being established. The most interesting in regard to birding are as follows:
The Natural Park of Cazorla, Segura and Las Villas is the largest Natural Park in Spain and second in Europe. It is located at the east of the province. The geology of these sierras (mountains) is formed by limestone, with dramatic landscapes of sheer cliffs, gorges, waterfalls and streams of crystal clear water. The most typical woodland is Pine forests, and the park boasts yet one more superlative as home to the largest expanse of forest in the whole Iberian Peninsula. The park is also known for being the birthplace of the River Guadalquivir. In the park, there is a total of 2,170 separate species of plant of which 34 are endemic. The endemic plant which has come to symbolise the park is a small bluish flower called the Cazorla Violet, Viola cazorlensis. Worthy of a mention is the great variety and number of orchids which we are able to enjoy come springtime. Some vantage points into the Natural Park: 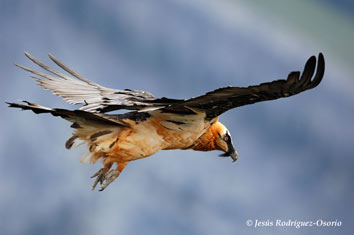 Rambla Seca: a dramatic place where it is possible to see Ortolan Bunting, Black-eared Wheatear, Melodious Warbler, and maybe the rare Citril Finch. Birds of prey like Golden & Booted Eagles alongside Kestrels, Common Buzzards, Griffon Vultures and the most emblematic bird in the park: the Lammergeier, Gypaetus barbatus. As recently as 1986, the last specimen disappeared from Andalucía. Now the Gypaetus Foundation and The Regional Council for the Environment of Junta de Andalucía are trying to create a stable population of the species in the Natural Park. Satellite technology is being used to track the progress of the new birds with poison and electrical cables considered the biggest threats to success. It is the only place in Spain outside the Pyrenees where this bird can still be seen, although efforts are being made to re-introduce it as a nesting species within the park, with the creation of a breeding programme based at the Centro de Cria Guadalentin.
The southeastern area of the park: A semi-desert landscape with many contrasts from the rest of the natural park. This habitat is home to many interesting bird species such as Rock Sparrow, Spectacled, Subalpine & Dartford Warblers, Black Wheatear, Blue Rock Thrush, Calandra & Short-toed Larks.

El Chorro cliffs: A breathtaking place where you can look down on raptors, Egyptian Vulture, Alpine Swifts, Red-billed Chough plus Rock Bunting, Black Redstart, Crossbills, and Firecrest.
Of course, you can also see mammals like Wild Boar, Mouflon, Fallow and Red Deer and the Spanish Ibex, the park’s most emblematic species. Small carnivores like Genet, Stone Marten, Wild Cat, Badger, Otter, and Polecat…Reptiles include nine species of snakes, as well as the Valverde Lizard, otherwise known as the Spanish Algyroides, which is exclusive to the park.

Down and along the Guadalquivir valley, just in the centre of the province, near the World Heritage Sites of Ubeda and Baeza, there are some interesting wetlands. The Alto Guadalquivir Natural Site is comprised of three reservoirs in the centre of the province. It is an important wetland for breeding and migrating birds, as well as overwintering waterfowl: Purple Swamphen, Spotted Crake, Black-necked Grebe, Snipes, Shovelers, Pochards, Grey and Purple Herons, Little Egrets, Little Bittern, Night Heron… and one important colony of Marsh Harrier. The reeds are home to Reed, Great reed, Savi’s and Cetti’s Warbler. Also Penduline Tit, Bee-eater, Roller, Black-winged Kite, Cirl Bunting, Golden Oriole, Red-necked Nightjar, Scops Owl and Lesser Kestrel are found here. 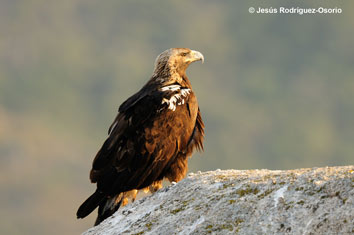 The Laguna Grande Lagoon, the biggest in the province, should definitely not be missed when you come for birding in Jaén. You can take a pleasant stroll around the lagoon. Species of water birds and others like flocks of Finches, Azure-winged Magpie and Long-eared Owl. Near the lagoon, there is a colony of Montagu’s Harrier.

Sierra Mágina: This rugged Natural Park covers 19,900ha of rocky, steep limestone terrain, with precipitous cliffs and high summits that are often snow-capped in winter. A separate mountain range, 40km from Cazorla, is home to the greatest density of Golden Eagles in Europe.
It is as well home to an extraordinary variety and number of wild plants; hardy plants growing on the upper slopes are unique to the park and its abundant wildflowers and aromatic plants add a richness of colour and scent to the Sierra. Due to wide variations in climate and terrain within the park, there is a wealth of wildlife, including many orchids and wild mushrooms, as well as native plant species, some of which are exclusive to the Sierra. This is the Realm of the Golden Eagle, so if you want to enjoy its wonderful aerial courtship displays, hunting flight or the majestic view of an Eagle perching, you should come to Sierra Magina. Other species which are easy to see are Bonelli’s Eagle, Goshawk, Peregrine, Eagle Owl, Rufous-tailed Rock and Blue-rock Thrush, Red-billed Chough, Crag Martin, Alpine Swift, Ring Ouzel, Golden Oriole, Black Wheatear, Cirl Bunting, and if we are very lucky, maybe a Wallcreeper fleeing from the cold of Northern Europe. And not only birds: Wild Boar, Spanish Ibex, Ocellated lizard, Montpellier snake, Snub-nose viper… Invertebrates like the grasshopper Eumigas monticola, which is native to Andalucía, and butterflies like the threatened Purple shot copper, Lycaena alciphron, Two-tailed pasha, Charaxes jasius, and the rare Mazarine blue, Cyaniris semiargus. 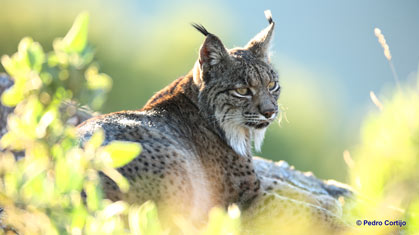 The Sierras de Andújar National Park forms part of the Sierra Morena mountain chain. This beautiful natural space in the northwest of the province lies between the Rivers Yeguas and Jandula. The gently rolling Natural Park is densely wooded and boasts one of Andalucía’s best preserved expanses of Mediterranean forest and scrubland.
The dominant vegetation is Mediterranean, with Cork and Holm oak woodland, and the geology is granite, quartz and slate.
It hosts a large numbers of hoofed mammals like Red and Fallow deer along with Wild Boar and Mouflon. Small carnivorous mammals like Otters, Genet and Wildcat, and it is home to many endangered species; birds such as the magnificent Spanish Imperial Eagle and Black Vulture, the shy Black stork, as well as the most endangered cat in the world, the Iberian Lynx.
This Natural Park currently holds the best and most important population in terms of conservation of the specie, with about 250 Lynx, which is around 70% of the world population.