Certainly across most of Europe this species is struggling to cope with changing agricultural practices and the vulnerability it has from a consequence of taking to hunting roadside margins for voles and other small mammals. Throughout Europe there are organisations attempting to address this issue by use of various reintroduction schemes, some successful, some meeting with failure. Of course before releasing birds into the wild you first have to understand the reasons for the original decline. It is not of any use simply to return birds to areas where they have disappeared without understanding why.

Antonio Pestana has studied and applied knowledge to his reintroduction project and has been able to monitor success rates since 2011. So his work has a successful history, a present expansion to nesting places and as importantly a strategy for the future, all criteria we require as a Society to consider supporting this or any other conservation effort. We can add the bonus of education to the criteria we need, where school children are learning of the importance to conservation work, not only just for Barn Owls.

All efforts put into this scheme are achieved through voluntary efforts and the biggest financial burden for continuing the scheme is the provision of food supplied to the young birds before they achieve independence. We will be investigating further the merits of the project with a view of considering giving our support. It would be useful to get member’s opinions and would canvas your response by letting us know via the Society’s email abs.sociedad@gmail.com please do let us know. Thank you 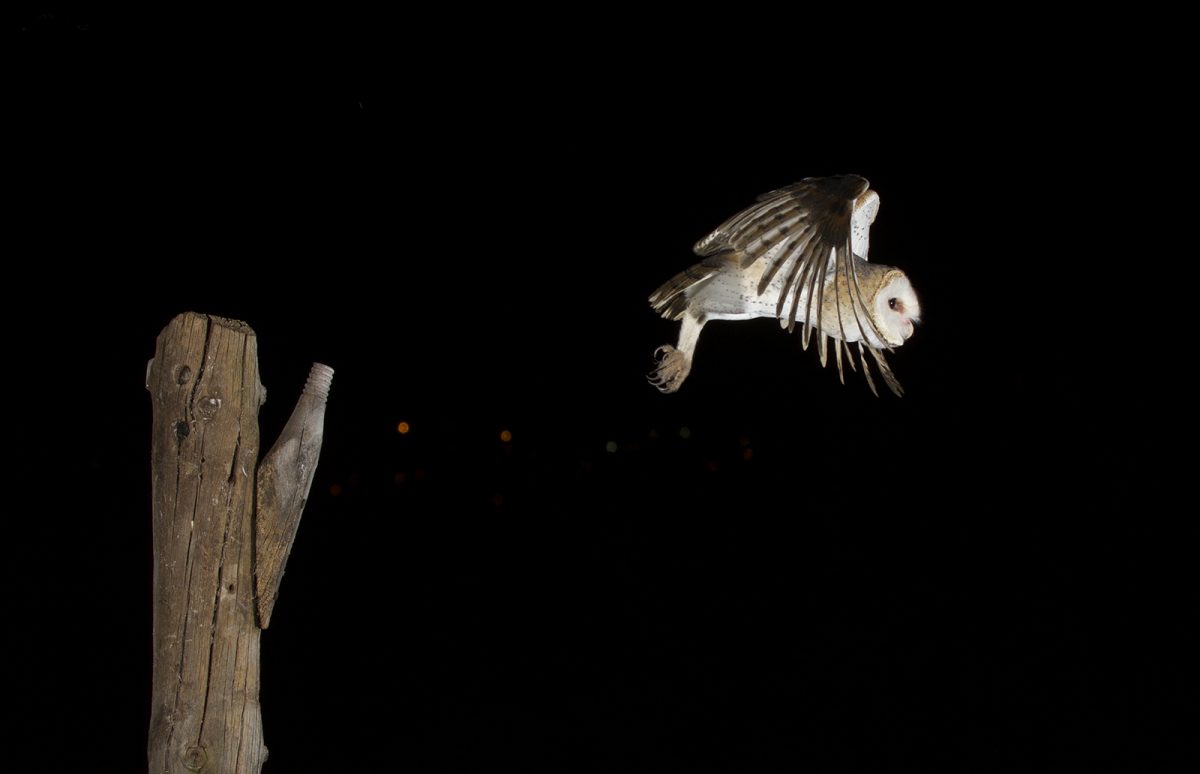 Until the late 70s of the twentieth century, the Spanish countryside enjoyed some tranquillity and quality. At most, there was one car per family, normally a low-powered car that didn’t speed, not least because the roads didn’t allow it. The fields were treated with natural manure and pesticides were absent. The cereal crops were long-cycle in maturation, harvested in July/August and then by hand.

There was no trip that took place at night where we didn’t see some Barn Owls on the telegraph poles or road signs. Today, there are two or three cars per family.

These reach breakneck speeds on roads that allow them to do so. The cereal is short-cycle ripening and is picked up by gigantic harvesters in the middle of the breeding season. In addition, pesticides, insecticides, herbicides and industrial fertilisers are spread over our fields.

On a night trip today, we can be sure that we will not encounter any Barn Owls and if we did, it would be almost harder than encountering a white blackbird.

To all this, we would have to add the loss of places to settle down and be able to breed that this species needs, because many cottages, dovecotes and barns have ended up falling down and those that have not, have covered all access to air chambers and lofts. Outrages such as poisonings and collisions are the norm these days for Barn Owls.

In short, this night bird is in serious danger and, perhaps because it is nocturnal and unseen by most, it is a case of out of sight out of mind. It does not enjoy the attention of being one of the aces of the game such as the Spanish Imperial Eagle, the Great Bustard or the Iberian Lynx; it most certainly is not being paid the attention it deserves

From Explora Natura, we have been immersed in a hacking project to reinforce the species in the Sierras Subbéticas (Córdoba-Andalucía). In total we have managed to release 47 Barn Owls in this period, making it possible to begin seeing them at night, their white silhouette illuminated by the lights of the city, while flying between chimneys and antennas.

In 2011 we placed in the facilities of a school two drawers / nests that would house the young owls from the different CREAs. We did this on purpose in a school to try to engage students and get the attention of the younger ones towards this species and showing their situation. We can be happy with this part of the project, because now there are many students who have accompanied us over these eight years to feed them and it was they, in technology class, who have manufactured the 18 nest boxes that have been distributed throughout the area so that they may have places to shelter and breed.

For this project, we have had the participation of volunteers, the Council of Cabra, the Institute of Secondary Education Alcalá Galiano, companies and donations from individuals. The Barn Owls and myself will always be grateful to you. 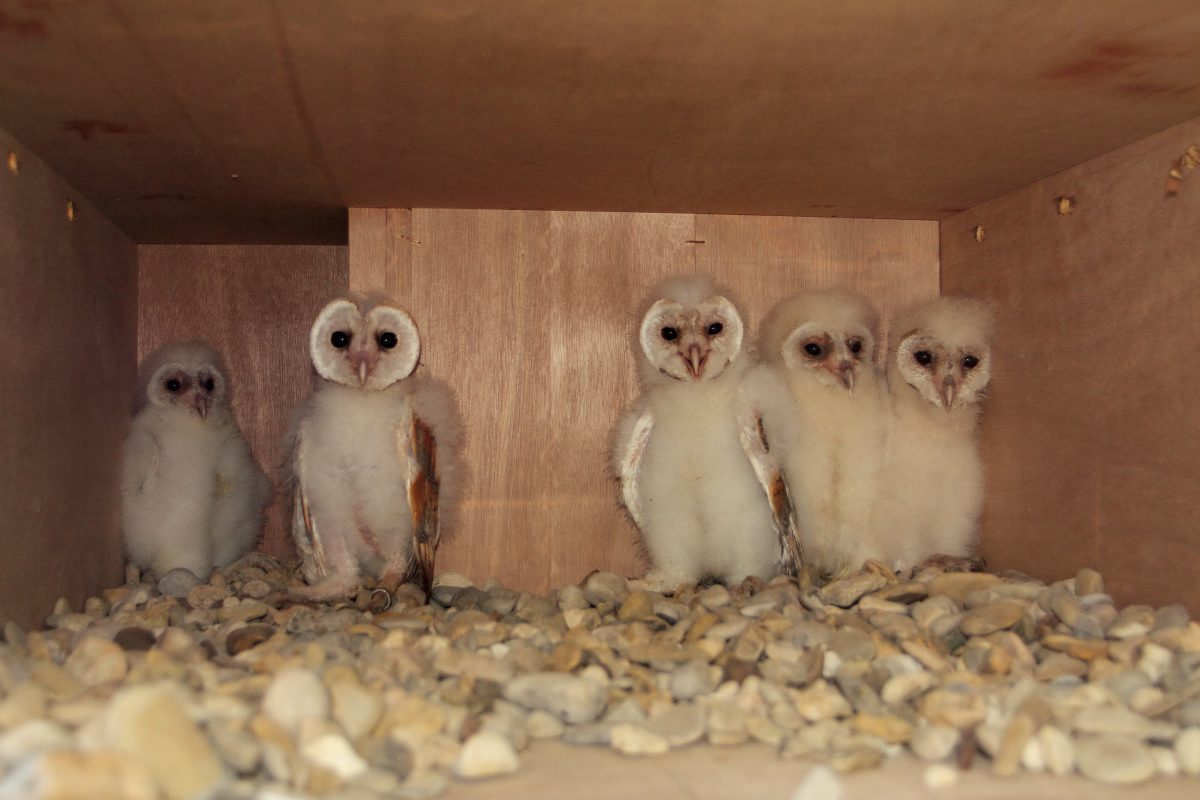 A total of 9 Barn Owls of different ages have come to the Sierras Subbéticas to reinforce the species in the area.

When a young Barn Owl arrives at a Threatened Species Recovery Centre (CREA), it still has a chance to be brooded as if it were in its own nest or as close to it.

This youngster will be introduced together with others of the same species and of approximate age in a drawer equipped with a trapdoor that during the first week is closed.

After those 7 days, the trapdoor opens so that the young birds become familiar with the environment, which must be of the same characteristics as that used by the species in freedom. In the case of owls, it can be on any terrace of a building as long as the cats do not have access (this is very important).

Once placed in the drawer, the Barn Owls should no longer have contact with humans, so a small gap will be used to introduce the food. When the Barn Owls are strong and agile, they begin to make the first flights, although, as they would in a wild nest, they continue to return to sleep in the drawer where they have shelter and do not lack food.

When Barn Owls are emancipated and we see that the food is no longer consumed, the hacking season is terminated until next year.

Let us hope that the Administration is aware of the serious problem that this beneficial species has and cares to provide it with places where nesting and controlling more rigorously the use of pesticides in the field.