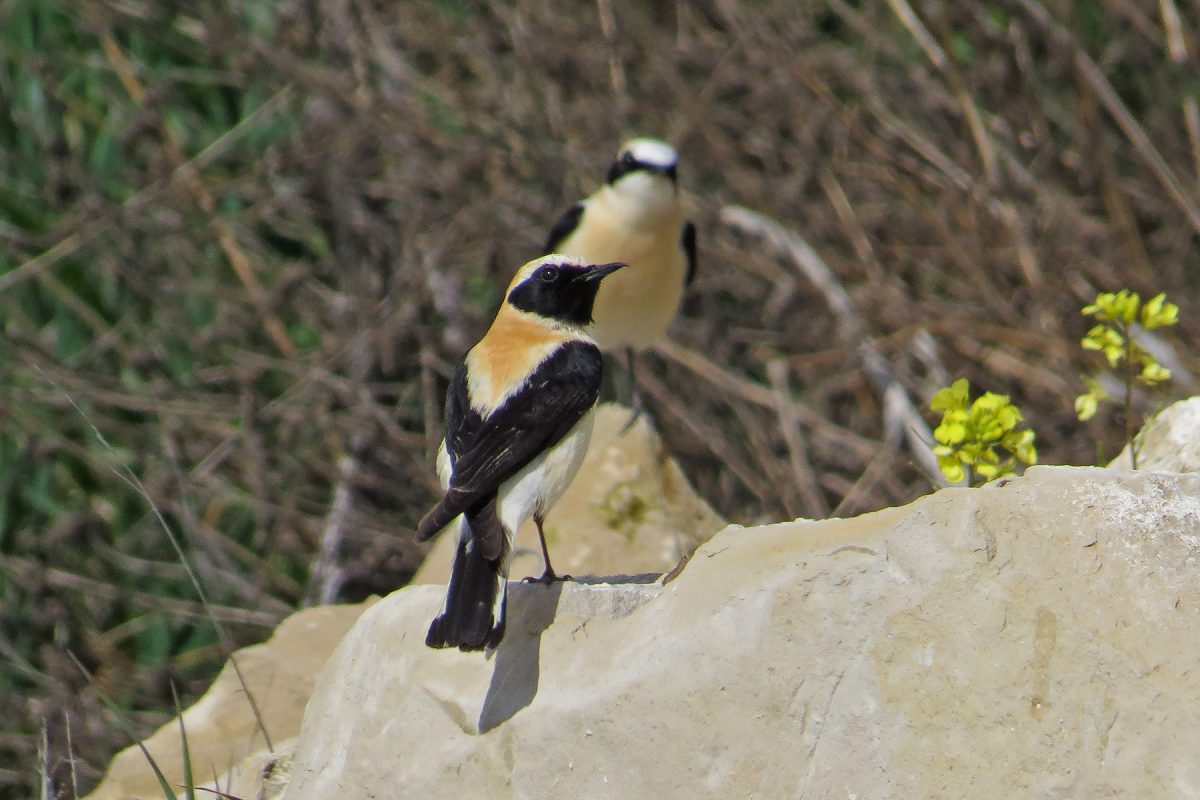 One of our most enigmatic summer visitors and one of the most attractive is the Black-eared Wheatear. The variable plumage for these beauties can cause confusion among those not familiar with the species. They are widespread throughout our region and occupy a range of habitats from broken terrain to cultivated areas. Recent observations have noted a sharp decline in their numbers and they are now classified as ’Near-threatened’ in Spain.

Over a 12 year period, I had controlled and ringed many Black-eared Wheatear in spring, summer and autumn. One of the most striking features was the plumage differences displayed with age within the species, both with males and females. Here we have 2 forms recognisable for the males, the dark morph with its black face and throat, the pale morph having a narrow dark mask that extends through and beyond the eye.

Age difference in plumage is more noticeable with male birds, and more subtle in females. In both cases plumage becomes paler with age. Maybe a loss of pigment as can be the case for us humans! The older and paler birds are striking, where pale crown and mantle contrast more sharply with the black wings and tail feathers. Birds returning for their first summer season, 2nd calendar year birds, are very dark and often retain buff edges to their flight feathers with brown scaling sometimes appearing on the breast.

So next time you are out in the countryside here, keep a watch for these beautiful birds and see if you can put an age to the birds you are seeing. Incidentally, autumn birds can also be aged successfully in the field, with adult birds much paler and almost pinkish in hue compared to the much darker juveniles.

Note: Our birds, Oenanthe hispanica hispanica, are wide-ranging throughout the Iberian Peninsula east towards Italy and Croatia, also present as a breeding bird in northwest Africa. Further east, from southern Italy to Asia Minor and Levant to the Caspian Sea, Kazakhstan and Iran the subspecies Black-eared Wheatear Oenanthe hispanica melanoleuca  replaces our bird. Recent sighting of the eastern bird (a much darker bird) in Morocco make it worthwhile to keep a lookout for this bird here in southern Spain.