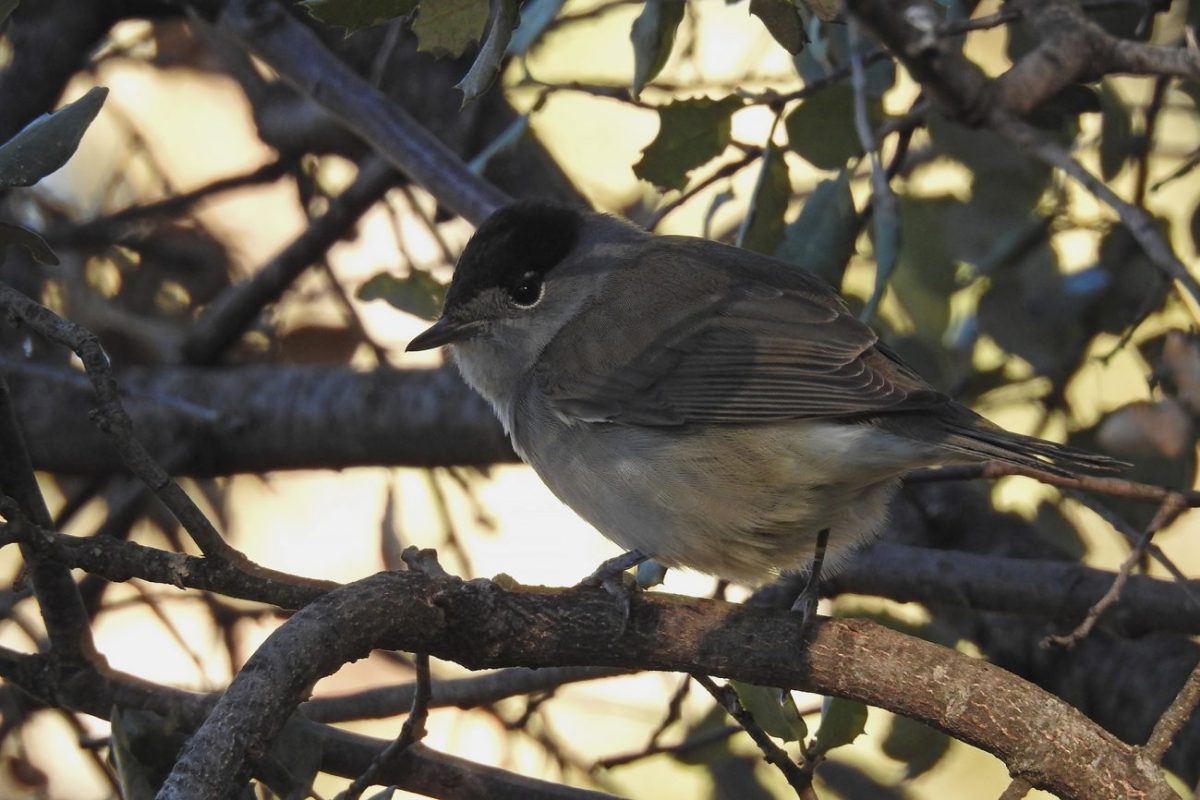 I have various species of warbler present here at the Finca. Some like the Cetti’s, fan tailed and Sardinian are resident, whilst the Bonelli’s and Melodious are summer breeders, still others like the Chiffchaff, Willow, Garden, Reed and Whitethroats are only seen during passage and then there’s the great influx of Blackcaps and Chiffchaffs (of various races) that appear in the winter.

This turnover of birds is fascinating and one that marks the passage of the seasons. Right now the Finca is playing host to hundreds of blackcaps and it’s incredible to think that they are entirely absent during the summer months.

In winter, at the Finca, Blackcaps tend to move in small loose flocks of four to around twenty individuals, there is an even split in gender, neither males nor females dominate these groups and first winter birds are no doubt present, but after the moult, they are very similar to the adults.

At the start of winter they are frequenting bushy areas where they are foraging for berries and fruits; Lentisc scrub and wild olive forest are favoured habitats. During the breeding season though, arthropods and their larvae form the major component of their diet as they switch from indehiscent fruit to high energy foods.

This is an identical strategy to that of the resident Sardinian Warbler and they favour the same habitat too as we move into December.

In terms of behaviour there is one noticeable difference, the resident Sardinians tend to maintain loose territories and are, in the main, solitary or are found in two’s and three’s. As mentioned above the Blackcap by contrast, coalesce into more organised flocks.

This flocking of course has a number of advantages outside the breeding season, many pairs of eyes are better at identifying opportunities for food and for observing predators, roosting together will provide extra heat and perhaps most importantly there is the adaptation of the selfish herd. In this it is the importance of the gene that is paramount, far more so than the individual, thus being part of a flock reduces the risk of any one individual within it of falling prey to a hunter.

As both of these species have similar feeding and habitat preferences it would be logical to assume that there will be strong interspecific competition between them. Further, as the Sardinian is resident (and therefore has an advantage with knowledge of the local geography) and is a more robust individual, one could assume that it will be dominant in any interspecific dispute.

However, this is manifestly not the case, it is the Blackcaps that drive off the Sardinian’s, using a combination of aggressive behaviour and numbers.

Interestingly these species share a similar signalling pattern, ie black caps in the males, though from casual observation both warblers are equally likely to attack the correct (conspecific) and incorrect (heterospecific) types – possibly indicating that sometimes, at least on a phenotypic level, interspecific aggression can be a case of ‘mistaken identity’.

As we delve a little deeper into the subject of interspecific competition between passerines in general and warblers in particular we can observe a number of strategies that have evolved to reduce this competition, feeding behaviour is one that springs to mind.

With this diffuse competition some species feed at different levels within the canopy, others favour scrub, others more open ground. Silvia warblers prefer to glean prey directly from twigs and leaves, whereas other species, notably the flycatchers adopt perch and pounce as their strategy.

Whilst this suggests a degree of niche separation, actually the birds, are in the main, competing for the same insects, just in different parts of the ecology.

It is likely that these differences are better explained as a function of nest separation at breeding sites, i.e. the territorial spacing means that it is advantageous not to have too many nests close together to reduce predation.

It is important to remember when studying ecology, to add the vital caveat, that it is, never just one thing!

As for our Blackcaps, well they are not really ‘king of the hill’ as is quickly demonstrated when they come into contact with the Chaffinches, who seemed to be ‘enraged’ with their presence and forcefully drive them away from resources such as water holes and roost sites.

There is a lot to be gained from simply looking at and observing the behaviour of our common doorstep species and in many ways this provides a much richer and deeper experience than constantly looking for new destinations or rarer individuals.

Patch ornithology is certainly benefitting from our ongoing confinement and I for one hope that it is a trend that will continue.