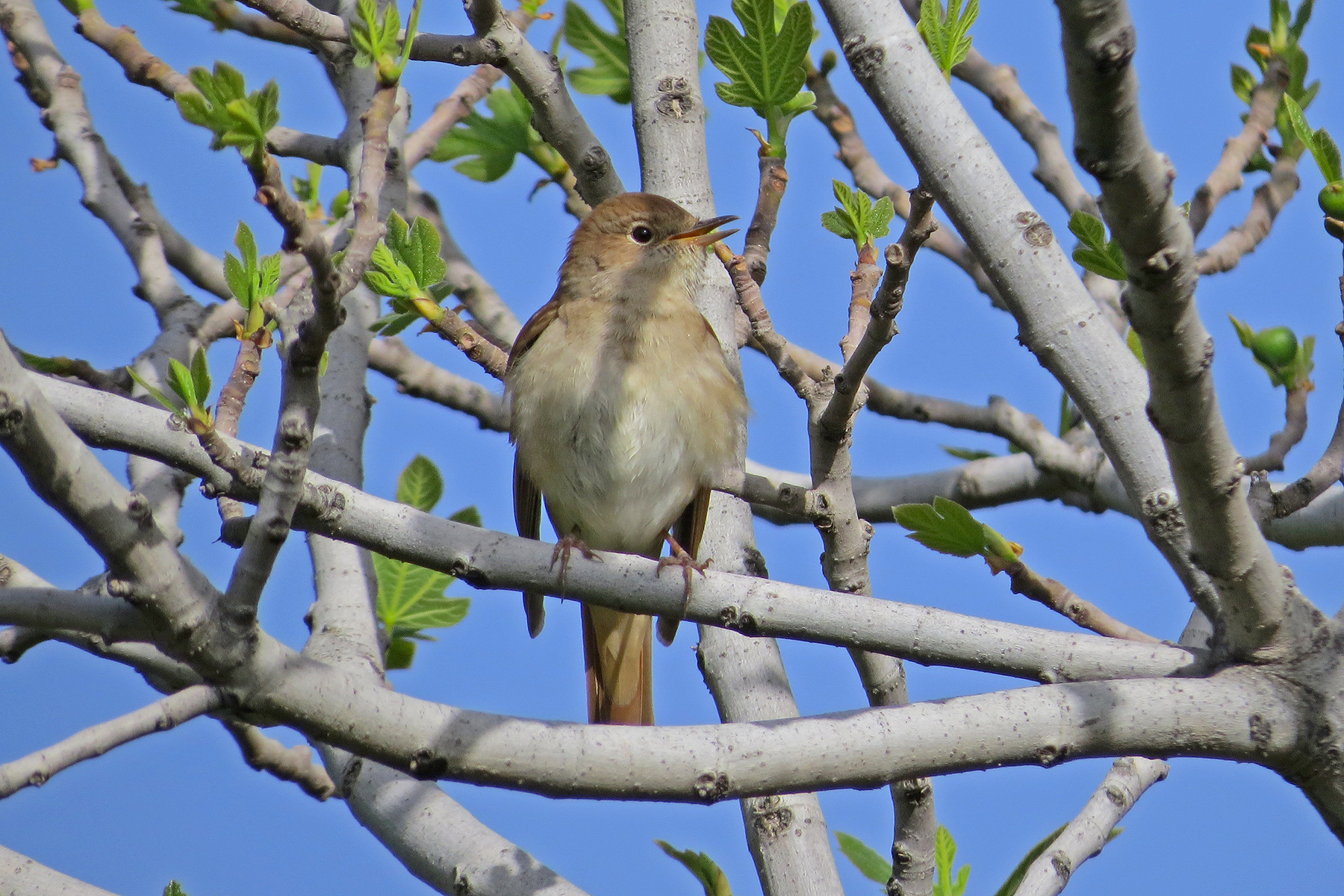 The Common Nightingale – Luscinia megarhynchos
What is your favourite bird that you most look forward to seeing return to us this spring and stay for our summer? If you are like me, then it is a hard choice with so many I love seeing arrive after their long journey from Africa. Several add colour to our birding landscape such as Woodchat Shrike, Bee Eater and Golden Oriole, whilst others provide a thrill such as our returning raptors. And yet, a bird I love to see returning is Nightingale. I admit it can be difficult to see at times, its skulking nature confining it to the tangle of scrub, but its presence is always betrayed by the most beautiful of songs and that can more than make up for the dull brown plumage of these wonderful summer residents.

Our Nightingales begin to arrive during March, after an amazing migration that involves crossing the open sands of the Sahara Desert. They are one of our vanguards for small bird migration here and although some will arrive during March, the greater number will take up residence in April. They are most likely to be heard rather than seen, their skulking behaviour makes them difficult to see. A rust brown colour on the upper side with a grey underside, makes for a perfect camouflage as they occupy dense scrub and tangles. In flight the rufous colour of the head and mantle is contrasted by a reddish colour to the tail, so providing another way to identify this beautiful songster.

It is worthwhile to go look for and hear this small bird. Here, the most favoured areas for breeding are dense scrub bordering streams, rivers and damp wetland areas. Very often they will give themselves away with a croaking call, an alarm and contact call, reminiscent of the song of a frog or toad. And yet, it is the song that is both striking and a joy which will reward your search. Males will sing constantly throughout the day and if you are lucky, they can sing from an exposed perch giving clear views. In favoured habitat it can be possible to hear several males singing as they declare and protect their chosen territories, they tend to sing less when eggs are laid by their partner and become shy, a strategy developed in order not to draw attention to the nest and avoid the prospect of vulnerable young being targeted by ground predators.

The name derives from the habit of singing during the night, made more noticeable by the fact few other birds will sing in darkness. Only the male sings and studies suggest night song mostly involves unpaired males who continue to sing in order to attract a mate. Our bird is known by a variety of names such as Common Nightingale, Rufous Nightingale or more simply as Nightingale. The name(s) are recognised like no other throughout the world and has been the source of inspiration through the ages for songs, books, fairy tales and even operas. Other than by the strong and amazing song, there is no obvious difference between the male and female, both share the same plumage and size (slightly larger than the familiar Robin, which is a close relative).

The etymology of our songster is interesting; Nightingale is derived from ‘night’ and the old English ‘galan’ which is to sing. Of course, they are also so named because they frequently sing at night as well as during the day. The name has been used for more than a 1,000 years and is steeped in lore and history.

Poets have long been inspired by their beautiful song and even Shakespeare compared his love of poetry to the song of the Nightingale. I particularly like the quote by Shelley in his writing of “A Defence of Poetry”, where he writes “A poet is a nightingale who sits in darkness and sings to cheer its own solitude with sweet sounds; his auditors are as men entranced by the melody of an unseen musician, who feel they are moved and softened, yet know not whence or why”.

So, far from being just another little brown job (LBJ), Nightingales are part of a cultural and historical heritage, a bird known to even the most uninformed among us. And who would dare challenge the assertion that it is one of the finest songsters in the world of birds?

I really hope I might have inspired you to go and look for this great songster, it is a common bird for us lucky enough to live here. It most certainly is not hard to find, or at least hear and any wet to damp area with an area of scrub can hold a pair. So why not venture out to an area near you and discover what many claim is one of the most beautiful sounds in nature.