ABS monthly meeting for November was at Luguna Dulce lead by Frank Hair.

On my way to the Luguna from Olvera the weather was fine and bright, but when I arrived at the luguna at about 9.30 we could not see the water in front of the hide due to mist. A few members were there already and as the sun burnt off the mist other members arrived. As I waited for other members to arrive I heard cranes, the birds we had come to see, but could not see them due to the poor visibility.  As the mist lifted we caught our first site of coots and grebes, as it rolled across the Luguna more and more birds came into sight White-headed Duck, Shoveler, Black-headed Gull, Gadwall, Moorhens, Crested Pochard, Black-winged Stilts and more (see species list below). When the mist finally cleared a female Marsh Harrier flew across the front of the hide and we all had great views. 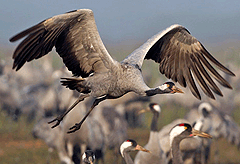 As the morning went on we could not see any cranes on the fields behind the Laguna despite the fact that we had heard them before the mist lifted. Suddenly a shout went up ‘Common Cranes in the distance’ and there they were, coming from the direction of the old farm house on the hill behind the Laguna, a string of about 15 to 20, closer and closer they came, we all hoped they would land in the fields and that we could get good views of these beautiful birds, but they would not land and flew off again. This kept happening; strings of 20 or more would look like they would come over and land. After some scanning of the fields we spotted why the cranes did not settle. In the fields behind the Laguna, some men with Greyhounds were hare coursing, so we were resigned to the fact the cranes would not land whilst this was going on, all very frustrating! With this in mind we concentrated on the Laguna and the fields to the right of the Laguna, our efforts were rewarded with a Merlin sitting on a post. Some of the members had to leave and subsequently they missed the Purple Swamphen on the far bank of the Laguna. 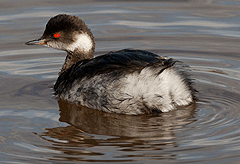 At around midday we left and headed off to check out the other small Lagunas at the other side of Campillos. The new small Laguna Rotounda was empty, but we were only going to use this as a car park and take only the 4×4’s. Back along the road towards Campillos and up along the dirt track to Laguna Slada. This small Laguna had good numbers of birds including Black-necked Grebe, Flamingo, Coot, Mallard, Shoveller, Crested Pochard and Little Grebe. As we parked the cars we could hear cranes so we walked towards the calls but still no cranes, at the end of the reeds we wanted to see if anything would come our way, soon over the top of the olive trees, there was a Black-winged Kite which hovered for awhile and then flew off, great that we all managed good views of it. We had been there for several minutes when a young hare dashed out of the reeds to our left and dashed off towards the reeds at the other side of a cleared patch (lucky it was on this side of the town). We had to move the cars so the nice olive picker could get his car out and we parked in a gap in the reeds for a final scan over the Laguna. The girls were off to the side and being very quiet, there was a male Black Redstart only a few meters away and snap, snap went the cameras as this lovely little bird stood on a clod of soil and bounced up and down with its little red tail quivering and all of the time lunch was calling us! 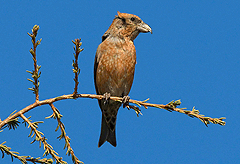 After a wholesome lunch we headed off to see if there were any vultures at the old feeding site. Sadly the vultures were not hungry, although there were around 40 to 50 sitting on the cliffs to our right, seeing us arrive some of them came over to discover whether or not we had any food (I thought of pinning down the old goat herder who lives there to see if they would come down, but he is way too skinny). The time was now 4.30 and most of the members had to return home for a blues night (lucky people), so the rest of us decided to see if we could get any crossbills at the top of the nearby mountain. Driving past the vultures we climbed, winding our way through the pine trees until we arrived at the Phone mast. As we stepped out of the cars we heard the crossbills calling from the masts and there, sitting on the masts, was a male, female and a juvenile.  As we walked around the compound we saw and heard more along with Great Tits and two vultures flew just below the tops of the trees and great views were had by all.  After a brief stroll around the compound it was decided that it was time to head home. Thanks to all that made it on the day and I hope everyone enjoyed themselves. Bob had left early to check out Laguna Piedra and he found the Common Crane, around 450 birds, so they are there. Why not come back up and try and find some for yourselves?

Frank is a local guide in the area and leads tours for individuals and groups, see the following link for details: FRANK HAIR