Pleasant weather greeted our group at the customary meeting point, the Lidl parking lot in Tarifa. A gentle breeze out of the NNE seemed ideal for raptors crossing over to Africa. And indeed it was!

Our leader for the day, Frank Hair, had selected as our first stop the Observatorio Ornitológico Mirador de Cazalla just north of Tarifa on highway N-340 (km 87). The Cazalla observatory, which is operated by the municipal of Tarifa, is one of the best overlooks for migrating raptors in Europe and is one of several locations used during public ornithological events in the area, such as the send-off “Despedida de Aves Migratorias” (Sept. 2019). (Planning ahead: There is also a companion bird welcoming event in March/April: “Bienvenida de Aves Migratorias”.) 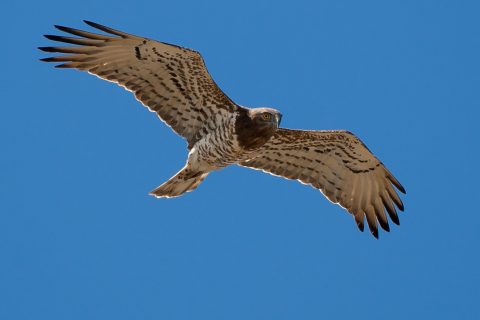 We arrived at Cazalla at about 9:30 finding mercifully few cars in the parking lot and disappointingly few birds overhead, aside from occasional fly-overs of isolated Booted and Short-toed Eagles. As more and more birders appeared in the parking lot, things also started to heat up overhead. Before long we were treated to substantial flocks of eagles, mostly Booted and Short-Toed, spiced up with occasional Griffon Vultures, Black Storks and White Storks. The birds seemed to appear magically out of nowhere in the northern skies, sometimes literally dropping down out of low cumulus clouds, perhaps simply to get their bearings. Here, right above the Cazalla ridgeline, the name of the game was to catch the wind- and thermal-driven updraft to gain altitude for the flight across the Straight to Africa. Masterful aeronautic displays evoked oohs and aahs from delighted birders. What a sight!

Around 12:30 we reluctantly pulled ourselves away and set out for our second destination, the coastline observation point reached from the track at km 85 on highway N-340. Passing by the offices of Centro Internacional de Migración de Aves (CIMA) on the unpaved road to the coast¸ we at first found relatively few birds and began to wonder what spectacular sights the crowd of birders at Cazalla were enjoying and we were missing. But birders are patient people. Then it came, for many the highlight of the meeting: a large (about 55) flock of Black Storks flew straight overhead – low enough to make for certain identification, but obviously high enough to ensure safe passage to Africa. These birds were motoring! Black Storks are shy and relatively rare and difficult to see in their woodland habitats in Central Europe. So seeing 55 (equivalent to a tenth of the entire Bavarian breeding population for example) at one time was an absolute thrill. 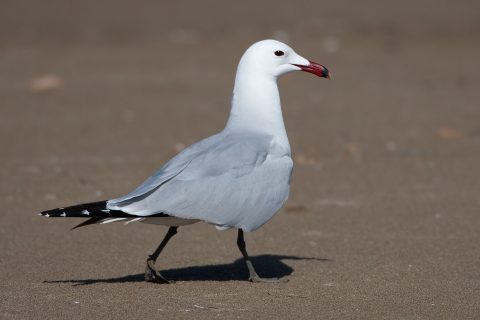 After a brief coffee/tea booster stage at the illustrious Apolo XI roadside restaurant, we rocketed off to our final stop at the estuary just east of Barbate. Here we were pleased to see that work on improving walking trails in the La Janda region has proceeded and that there are new official trails extending along the dikes from our customary first stopping point along the estuary. Moving up the track and checking out the small islands, we were able to see groups of Audouin’s Gulls in addition to the more common gulls and numerous Stone Curlews. At our turnaround point, where the track becomes private, we observed Flamingos a Ringed Plover, Little Stint, Northern Wheatear, Zitting Cisticola and, thanks to a keen-eyed member of the group curious about a strange brown bump on the distant shore, an Osprey. For many, this frosty headed individual was the icing on the cake of a great day of birding and camaraderie.