A cold morning was predicted so most of the members arrived with extra layers to wear! Having wished everyone a Happy New Year, it being the first meeting of 2018, we proceeded to follow our leader for the day, Frank Hair, down to the pond by the car park. What a difference to the last time we were here in November – plenty of water all around after recent periods of heavy rain! There was an immature Greater Flamingo stamping around in the pond for its food and plenty of Shoveler Ducks in the immediate area. Following the line of the pond around we also viewed Common Sandpiper, Coot, Common Snipe, Lapwing and several Teal and Black Winged Stilt. 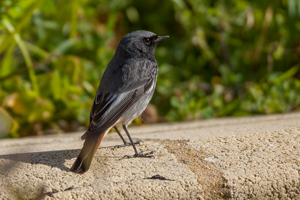 Moving across to the grassy area opposite we had views of Robin, Linnets, Stonechats, Black Redstarts, Blackcap, Sardinian Warbler plus a small group of feeding Spanish Sparrows with their distinctive white cheeks. Our group was then rewarded with sightings of a Song Thrush, Redwing, Bluethroat and great bonus bird – a super fluffy Wryneck – what a great start to the meeting especially as the bird allowed all members to appreciate it, utilising our ‘scopes.

Onto the recently re-constructed wooden bridge, which was now surrounded by water, we had further views of Teal and Coot, with a couple of Moorhen tucked into the back of the pond. A few beautiful, adult, Greater Flamingo flew overhead whilst over on the main lagoon a huge flock of Lesser Black Backed Gulls, along with some Black Headed Gulls, took to the skies. 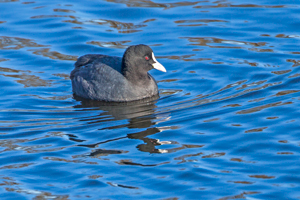 Having crossed the bridge we scanned the fields but other than the Jackdaws there was nothing else to see so we continued along the path hoping to find some warblers in the scrub. A variety of rabbits were seen nibbling between the bushes and Iberian Hares were racing each other along the field. Marsh Harrier was viewed soaring overhead and in the distance a few Shoveler and Mallard in a small pool in amongst the trees. A Buzzard took off from the copse and was later seen perched on a nearby electricity pylon, and far away a Green Woodpecker could be heard with its distinctive, recognisable call. In amongst the scrub along side, the raised pathway were Meadow Pipit, White Wagtails, Goldfinches and Greenfinches along with a flock of Serins flying around. An Iberian Grey Shrike was seen on a pylon near the Tamarisk, and a Dartford Warbler was spotted by some on the close scrub. Crested Lark and Great Tit were also heard behind us and some of the group viewed an Osprey having a morning snack of fish. 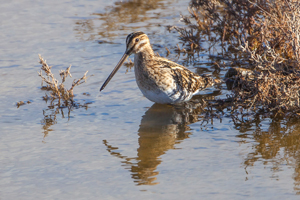 On our return over the bridge, much warmer now with the sun shining, a Hoopoe flew past and a small flock (7) of Avocet, first of the year for some of us, flew overhead. Returning to the centre for our annual financial meeting we had further views of Redwing and a Stone Curlew hiding in scrub, but with just its head showing.

After our meeting, we moved out to the area behind the centre where we found more Stone Curlew, Common Snipe, Shelduck, and a White Stork flying in the distance over the wind turbines. Over the lagoon on the far side, we scoped more Greater Flamingo, Common Crane and a group of Shelduck grazing.

Some of the group had returned home while others drove around the lake where they saw Black-winged Kites (seeing off a couple of Ravens), Hen Harrier, Skylarks and Common Cranes. Bob Wright was fortunate enough to discover 30+ Little Bustards closer to the Campillos – Antequera road, whilst Ricky Owen and his party found flocks of Calandra Larks, more Common Snipe and Green Sandpiper on the track and flooded fields. A very memorable first meeting of 2018 for us all.