26 hardy souls turned up to our meeting place on a beautiful winter’s day in the mountains of the Serranía de Ronda. We had passed through a valley where it was a cold 3C on the way, which had us thinking that we were in for a bitter day. We set off for the Embalse en Zahara de las Sierra where we were extremely pleased to see that the water levels were slowing rising, having been at their lowest since it was built many years ago. The area was covered in thousands of Tamarix, where there should have been a few metres of water, but it was now beneficial to many birds. Sardinian Warbler, Zitting Cisticola, Dartford Warbler, Siskin, Kingfisher, Chiffchaffs, Kingfisher, Green and Great Spotted Woodpecker etc etc. It was a really sheltered spot and the birds as well as us were feeling pleasantly warm.

We took to our convoy and gradually climbed up the mountain towards Grazalema, a quiet passage aside from Rock Sparrows on the overhead cables, where some stopped at a Mirador near the village and others going towards an (unknown to many) out of the way track where we found Black Wheatear, Iberian Grey Shrike, Meadow Pipit, Green Sandpiper, Grey and White Wagtail amongst others. We really wish that we could have stayed there and gone to fetch the others! Unbeknown to all of us there was a cross-country race going on from Zahara to Grazalema and around the mountains! We arrived at the meeting point of Puerto de las Palomas, 1376m, to find a multitude of cars, with people clapping and cheering the runners on. How I envied them their fitness, but they unfortunately had ruined our day. We were expecting to see Ring Ouzel and possibly Alpine Accentor, but the birds were keeping well out of the way by the disturbance. The Griffon Vultures didn’t seem to mind though.

After much discussion we met further down the mountain at Garganta Verde, but to our horror there were people there too. The Medioambiente were kind enough to let 5 people through at a time for 10 minutes at the first Mirador, and as it took 15 minutes to get there and 15 minutes back it logistically wasn’t possible for us all to go. From the car park we saw more Griffon Vultures, Bonelli’s Eagle, Rock Bunting, Black Redstart in good numbers, Goldfinch, Kestrel, Chough galore and several more species. What a disappointing morning it had turned out to be, but no pasa nada, though we did manage a small herd of Mountain Ibex, accompanied by a fine old male. There is always another time.

28 of us (we were joined by others) had a very enjoyable lunch at a local Spanish restaurant and we enjoyed our socialising as much as we did the food. We hope to see many of you next year and I will take this opportunity to wish everyone a Merry Christmas, Feliz Navidad and a Happy, Healthy New Year, Feliz año Nuevo! 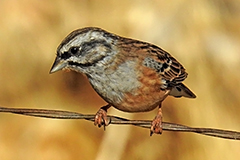