It was on a cloudy cold and windy day that we arrived at Tarifa for Sea Watch. At 8.30am a small group of nine met our guides Frank Hair and Javi Elorriaga at the entrance to the causeway leading to Isla de Las Palomas. We went through iron gates into the island fortress to find ruined buildings and large areas of abandoned training and parade grounds. These buildings once housed over 2000 of Spain’s special forces. 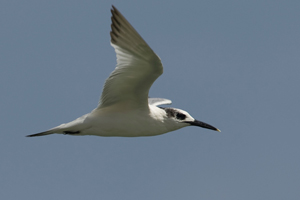 To do our Sea Watch, we had to keep to a restricted path which led past the lighthouse, over a ridge to the hide overlooking the Straits. It is here where the Atlantic and Mediterranean meet. Had the weather been clear the views must have been incredible, but unfortunately the visibility was poor. Moreover the wind was westerly, blowing the passing birds further towards Morocco. However in the 3 hours we were able to see hundreds of Cory Shearwaters, Baleariac Shearwaters and lesser numbers of Gannets, Sandwich Terns and one Great Skua. Although it was disappointing, I will certainly be back next year. Hopefully to have better weather and the opportunity to see many more species. As soon as we left Tarifa the sun came out.  We drove to La Janda, a vast area of rice and cotton fields. We went looking for a rarity hidden amongst hundreds of Lapwing and Glossy Ibis. It was a Sociable Plover and one had been seen over the previous few days.

We knew exactly where to look but, scan as we might, it eluded us. However we had excellent views of two juvenile Night Herons both in flight and sitting out in the open. Red Kite, Marsh Harriers, thousands of White Storks, an obliging Spoonbill which stayed a few meters away from the track.  Crested Larks and Cattle and Little Egrets were also present, as was a Spanish Sparrow. But the stars were flight shots of Spanish Imperial Eagles and a group of early arriving Cranes. Later we drove towards Benalup and had lovely views of Serin and a Whinchat.

Many thanks to Frank and Javi for all their work in organising the day.