Meeting Point: The group gathered at The Estacion Via Verde, Olvera at 09.30. We then drove in cars, parking a couple of kilometres short of the Estacion de Zaframagón.    We walked then slowly to the Estacion, temperatures heading for 30 degrees. Few birds to be seen. Across the viaduct, the water flowing some 30 meters below us. Looking up to the Peñon mountain, the large colony of Griffon vultures gave us a fine flying display as our first good siting. 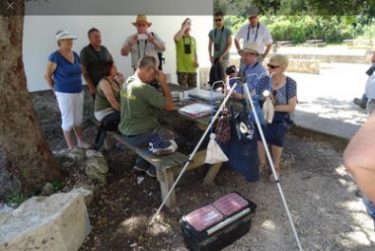 Ringing:  There was a ringing session to be carried out at the Observatorio. We gathered around a shady table where the leader of ringing team sat. Some of our members joined in to recover birds netted on the adjacent hillside. We observed the leading ringer careful handling of the birds, brought from the nets in individual Cotton drawstring bags, being carefully taken out, examined, detail noted for variety, sex, condition, ringed, if not already fitted, ring info of recaptured birds etc. The handling was outstandingly assured. The birds showed very little or no alarm and then flew off when released to resume their life. This was an outstanding chance for us to observe an expert at work at close hand.    The varieties caught were…Nightingale, Melodious Warbler, Blue Tit, Blackbird, apparently a rather old specimen, recognised by flight feather distinction, but still in good condition  (like a few attendees) 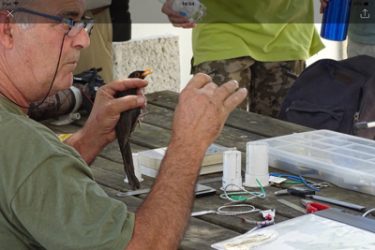 Observatorio:  Most of us then went into the Observatorio, to their cinema room, to view wonderful live close shots of the nesting Griffon Vultures from the observatory camera sited  on the opposite mountain. One egg is normal. We saw progress videos of a chick until more live shots of the enormous offspring close to fledging, exercising the wing action ready for flight.    This was another  good element of the day.
At around 3pm We started back along the Via Verde to the cars and as temperatures were now mid 30s our leader Frank arranged a lift back to the car park.    Final Highlight:  For those first four at the cars we had a fine sighting of a pair of golden orioles. They flew past us as we sheltered in shade, into a small tree not more than 30 meters away. They stayed in the tree for ten minutes whilst we viewed. Unfortunately, we had, just before, put our cameras into the cars which were adjacent to the tree in which the birds moved around. If only?    Thank you Franky, another  fine days birding.