Almeria is well known for a number of things,one of them being the wind and this certainly made it’s presence felt during our April field meeting. Seventeen members gathered on Saturday morning by the main lagoon at Punta Entinas Sabinar. Early arrivals were treated to very close views of two pairs of White headed Duck. There were several Black necked Grebe on the lagoon and Squacco Herons in the reeds on the far banks. Whiskered Terns flew overhead along with two Marsh Harriers.

We then drove into the reserve itself and at our first stopping point we found lots of Red crested Pochard alongside more common ducks like Gadwall,Shoveller and Shelduck and of course Greater Flamingo was also here.A Fan tailed Warbler ‘zitted’ above us and Yellow Wagtails were present but small birds were generally absent due to the wind. Black winged Stilts were in the shallow pools with many Kentish Plover and the odd Redshank. Further on we found Gull billed Terns but were surprised by the absence of Collared Pratincoles. However as we were driving back three of these stunning waders landed just in front of our mini convoy and gave fantastic views and the chance for some photos. A Little Egret close by was feeling a bit overlooked I imagine! 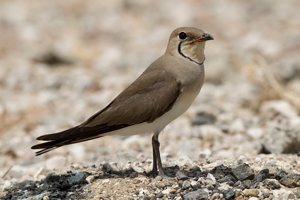 A narrow inlet further east gave us chance to test our identification skills on a group of distant terns as a group of Slender billed Gulls battled the waves. Common Tern and Little Tern were present. Our next stop produced Yellow Wagtail again and good views of Purple Gallinule and Glossy Ibis with lots of distant Pochard,Red crested Pochard and a male White headed Duck. A very windswept group decided that it was now time for a welcome lunch.
In the afternoon we moved onto Las Norias and an early sighting of Purple Heron was a real bonus. To our surprise we found a pair of Stone Curlews on some waste ground and then were treated to a wader fest with Wood Sandpiper,Common Sandpiper,Little Stint,Little Ringed Plover,Black winged Stilt and Avocet all making an appearance as well as several Yellow Wagtails. A superb male Night Heron brought our first day to an end. 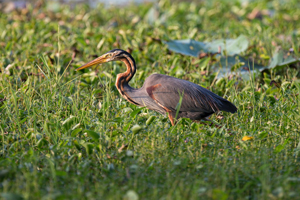 Day two began in the first hide on the salinas at Cabo de Gata where our numbers grew to in excess of twenty as new folk joined the meeting. A stunning Wood Sandpiper was a great way to get everyone awake. Other waders included Kentish Plover,Ruff,Black tailed Godwit,Grey Plover,Redshank,Curlew Sandpiper and Avocet. Four Gull billed Terns joined them on the rocky outcrop and of course Greater Flamingo was present in good numbers,mostly juveniles and non breeders. A Southern Grey Shrike called from a distant bush. We then took a walk along the southern edge of the salinas. Our first bird here was Woodchat Shrike soon followed by a pair of Ravens and a real surprise flyover by two Alpine Swift. A Corn Bunting was hunkered down against the wind,heard but not seen. The large concrete hide at the eastern end of the salinas gave us good views of more Avocet,a Little Stint,numerous Slender billed Gulls and the chance to show the Flamingos to some Spanish youngsters through our telescopes. We then parked in the village of La Almadraba in order to check the salinas here and were rewarded by a good number of Audouin’s Gulls and our only Greenshank of the trip.Lunch was taken in the beachside café in La Almadraba.From here we took a brief and fruitless walk round the back of the salinas so cutting our losses we drove to Rambla Morales. A Stone Curlew flew overhead as we parked then a walk along a very windswept rambla produced five male and a female White headed Duck. Feeding at the mouth of the rambla were Sanderling,Ringed Plover and Yellow Wagtail. Three Little Terns rested in the sand. A hot,tired,windblown but happy group made it’s way back to the cars,farewells were exchanged and that was Almeria for another year.