Arriving at Fuente de Piedra Visitor Centre a few Lapwings were viewed in the nearby field before we joined the group.  It was a cold and chilly morning, with temperatures just above zero so most of the 22 members present were quickly donning another layer of clothing before we set off just after 9 o’clock.

We walked over the newly renovated wooden bridge looking for any birds that could survive in this dried up area and soon we spotted Stonechat, Black Redstart,  Goldfinch, White Wagtail,  Crested Lark, Serin,  Sardinian Warbler , Linnet, Jackdaw and several Hoopoe in amongst the parched landscape. Following the path around we were rewarded by the appearance of an Iberian Grey Shrike plus a Dartford Warbler in the shrubs nearby. 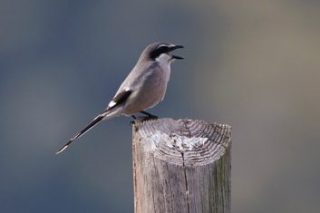 Continuing our leisurely stroll along the dusty path a Common Kestrel was seen being attacked by a flock of House Sparrows over the field. Several birds were scoped on the telegraph wires, amongst them were Corn Bunting, House Sparrows and a solitary Rock Sparrow. Further along the wires were a couple of Ravens and Wood Pigeons.

Finally a trickle of water was seen with only a solitary Green Sandpiper, but by now our feet were beginning to drag so the first group headed off to the hide, which was beckoning us in the distance.  We arrived and gratefully sat on the wooden benches searching for Stone Curlews – to no avail.  However a flock of flamingos were viewed lifting off the water in the distance before several groups of Common Cranes, totalling a couple of hundred made their noisy way across the dried up lake to the far shore, where there was still a little water.

The other group managed to see a Red Kite, Buzzard and a Hen Harrier over the fields before they arrived at the hide.  By now the heat was building and layers were dispensed with before we set off back to the Visitor Centre to collect our lunch and some welcome water. We picnicked under the shade of the oak tree and viewed the dried up lake, which resembled the Sahara Desert – will it ever recover?

Moving round to the hide overlooking the lagoon we found a Marsh Harrier, Coot, Moorhen, Little Grebe, Mallard,  Shovelers, Common Pochard , Green Sandpipers , 4 Common Snipe and a dozing Teal.  We returned to our respective cars and decided to drive around to look for a better view of the Cranes and to search for the Stone Curlews – however we were not successful – just fields full of White Wagtails and Meadow Pipits. However, 1 vehicle managed to see a Black Shouldered Kite before we set off home.