The Andalucia Bird Society meets at one of the classic Andalusian birding destinations: the Mouth of the Guadalhorce Nature Reserve. A few brave birders (Derek, Jerry, Mick, Jacinto and I) attended the first call of the field meeting at 6:00 to visit Zapata before dawn in search for the Red-necked Nightjars. It did not take long until we found the first one and I could manage to take a record picture with the invaluable help of Derek, acting as the perfect Lighting Manager.
Some more nightjars showed up while Nightingales sang from the river forest and Yellow Wagtails, Crested and Short-toed Larks gabbled from their roosting places. A number of Night Herons and Cattle Egrets flew upstream with the first lights of the day, when only Moorhens and a Common Sandpiper wandered about the ford in the river.

It was time for breakfast before a call to the reed bed with some more light. It gave us Reed and Cetti’s Warblers in the scrub and Common and Pallid Swifts and Barn Swallows in the air. The bird ringers had their nets set in the ditch and they had caught several finches like Goldfinch, Greenfinch and Serin.

At 9:30 the whole group began the visit to the mouth. We had great views of a Reed Warbler singing quite in the open by the river bank while a Sparrowhawk circled in the distance over Guadalmar. There were some Red-rumped Swallows flying among the House Martins near the bridge to the reserve.
We split the group in two and had a walk around the hides. My group headed to the Laguna Escondida where, apart from the typical White-headed Ducks, Pochards and Little Grebes, Lindsay spotted a Cuckoo that flew into a tamarisk where it sat for a moment before disappearing.
We went on towards the east end of the reserve. We looked for a Nightingale singing from the tamarisks and were lucky enough to find it in the shade, having great views of the concert through the scope. 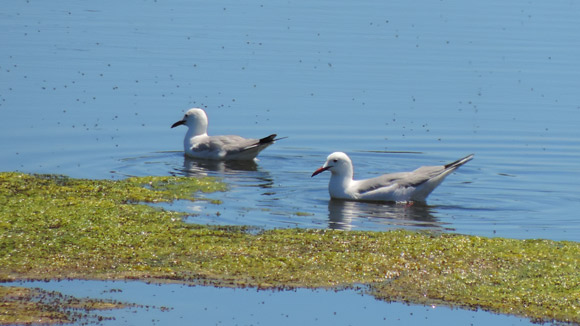 There was a Spoonbill resting at the Laguna de Rio Viejo and lots of Black-winged Stilts everywhere. While scanning the Rio Viejo, two Spanish friends standing by the group discovered a Roller. It was sitting in a far distant tree and then another one began to fly around it until they finally got out of sight.
We walked across the beach towards the Laguna Grande. There were Crested Larks and several Kentish Plovers beyond the fence and a few Balearic Shearwaters flew grazing the sea to the west. Nothing new at the Laguna Grande but seven Slender-billed Gulls among the Black-headed ones.
After the group said goodbye, Lindsay and I went back to the Laguna Escondida where Derek’s group had spotted the Little Bittern a few minutes ago. We did not find it but had very nice views of the White-headed Ducks in display, a fast flight of a Kingfisher and the visit of a beautiful Bee-eater. 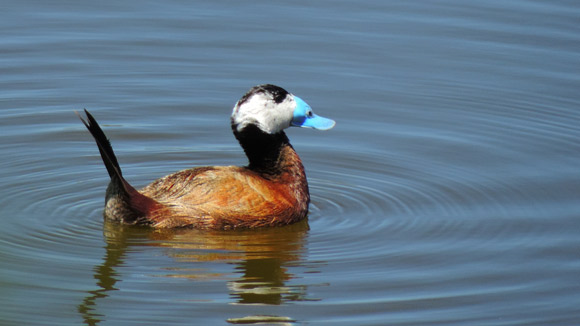