With a busy month programmed into the event schedule [3 meetings] the first of them was rather spoilt by a Levante wind.  So not much activity on the raptor crossing scene for the 20+ members who gathered in a sheltered spot in Lidl’s car park wondering what plan ‘B’ maybe.
It was decided to try Guadalmesi, because if some birds do try to cross they normally struggle to reach the cliffs and present some of the best raptor viewing in spring time.

Sadly no luck today, although a few Booted Eagles and Black Kites were viewed circling in the close by valley, probably overnighters from the previous day.  So would we find the small birds, our summer visitors?  Well yes, but not in the variety or quantity of previous years visits; a Nightingale sung from a dense bush, but would it show?  No was the answer, but everyone enjoyed the song.  Moving on to the observation point some Sandwich Terns were busy feeding displaying their diving antics into the choppy sea. 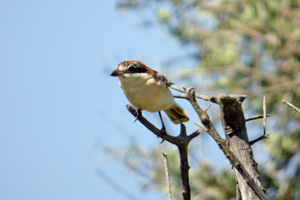 At the point, the usual Little Owl braved the wind and displayed well on the crumbling building, always a guaranteed ‘tick’.  Both Lesser and Common Kestrel were flying around and on the rocks below a group of 5 Whimbrel were spotted.  Retracing our steps we added Cormorant, a pair of Ravens, Blackbird, Sardinian Warbler, Goldfinch, Linnet and a fabulous close up view of a freshly landed Black-eared Wheatear.
Deciding to move on to other areas, via a planned coffee stop at Apollo X1, a quick visit to the car park in Tarifa to hopefully ‘clock’ the Common [Garden] Bulbul was added.  Luck was with us in spades, not only did we hear it, but had super views of it sitting a branch above a Common Redstart!
Buoyed by this change of fortune, the coffee tasted even better at Apollo X1 and on catching up with other group members we formulated plans.  The wind was going to make La Janda pointless, so the consensus of opinion was to bird Barbate. 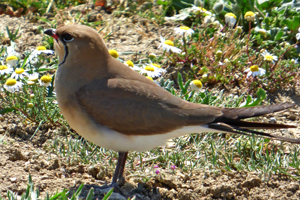 Never a disappointment previously, and it soon proved to be that this day was no different.  Slightly more difficult because of the relentless Levante, but the birds were still there.  There was a lack of water in the first lagoon but this didn’t deter the beautifully noisy Collared Pratincoles flying around and then landing on and around the main track.  Such fabulous birds, they never fail to please the watcher.  Taking our eyes from them for a while we added Cattle Egret, Little Egret, Zitting Cisticola, White Stork battling the wind, Crested Lark and Corn Bunting.  Many waders were spotted in distant pools so we drove up a little way to make ‘scope ID easier.  En route we clocked Pallid Swift, many Yellow-Wagtails [all Iberian blue heads] and the first of the many more to come, Woodchat Shrike.
Telescope out on the lee side of the car for some short of shelter we panned for wader ID.  Many Sanderling and Dunlin, in their breeding plumage, were gathered together, with a few Little Stint and Kentish Plover, feeding and sheltering as best possible.  Larger waders, Grey Plover, Redshank and Black-winged Stilt, were more open to view and behind them were Spoonbill, Grey Heron, and several Mallard.  Soon Common Sandpiper was spotted before we moved even further up the track.
Now it was getting very interesting with Northern Wheatears, Greenfinch, Goldfinch and Hoopoe in the grassy areas and our diligence was soon rewarded with a very close view of a Tawny Pipit. 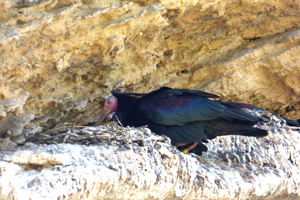 As one of our car load had never seen Bald Ibis, the birds failing to attend the marsh at that time – I don’t blame them – we decided to visit their nearby nesting area.  Several of them were on the ledges, nesting and looking more like punks than ever with the wind blowing their feathers around their heads.  As usual they were being berated by Jackdaws but not taking a blind bit of notice.
We returned to Lidl’s car park, via the bottom track in La Janda.  As previously guessed it was pretty devoid of birds, I presume not only because of the wind but also the lack of water in the fields.  However we managed to find Glossy Ibis, a suicidal Pheasant darting across in front of the car, Purple Swamphen and Griffon Vulture.
Our car totalled 58 species for the day, other cars may be more or less, but, whatever, we enjoyed the days birding albeit in very difficult circumstances.