More than 30 members arrived for the visit to this iconic site in the east of Andalusia.  As we gathered in the morning at the hide on the outskirts of town, Bob Wright, our illustrious leader, gave us a talk about where to go and what to expect.
The area is large and stretches along the coast from the west side of Cabo de Gata township to the east of the Sierra de Cabo de Gata where the lighthouse is situated.  It comprises of three main areas:  the Salinas to the east of town which are still commercially operated; the Sierra de Cabo de Gata with the lighthouse at its base; and the Rambla Morales which is a permanently wet river bed – at least for the last kilometre or so.
We divided up into as few cars as possible and each set off for a different part of the area.  Almost the first bird seen was a Marsh Harrier gliding on the wind surveying the steppe below.  At the first hide, there were waders on the shallow lagoons such as Greater Flamingo, Yellow-legged Gull and mixed in with them were several Slender-billed Gulls.  These were showing their pink breast plumage and long slender necks as they swam about the lake.  A few Sandwich Terns were spotted on the island across the lagoon and later a gull-billed Tern was seen.  Other waders included a flock of Avocets feeding in the water, upending their tails as they probed for food.  Little Egret, Dunlin, Kentish and Ringed Plover, Common and Green Sandpiper, Black-tailed Godwit, Grey and Golden Plover and Black-winged Stilt were all recorded.  In the steppe brush around the water were many song birds including Yellow Wagtail, both Swallow species and House Martin. 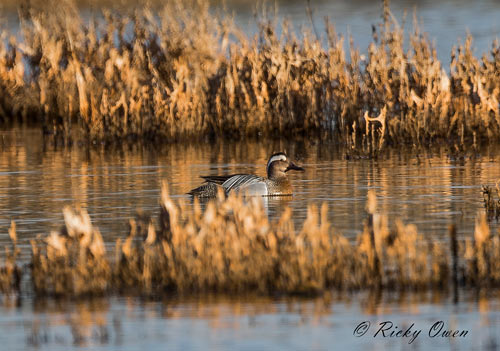 We moved on around the lake to another hide and here were more water birds: Spoonbill, Cormorant, Grey Heron, Little Grebe, Teal, Moorhen, Shelduck and Mallard.  Across the road, on the beach we searched for other species.  Many members saw Gannet along with other gull species.  It was fairly windy and there were white crests on the sea making it unpleasant looking into the wind.
On to the next hide, which was down a track that became very muddy with many puddles.  We stopped before the hide but near a large flock of gulls on the rocky bars across the lake.  Here there were many Audouin’s Gulls, together with Lesser Black-backed Gull.  Many Corn Buntings were singing in the bushes and Crested Larks flew here and there as we passed by them.
We moved on to the lighthouse area which is up a narrow road over part of the Sierra.  In one of the many sheltered bays near the lighthouse a Yelkouan Shearwater was seen on the water.  The wind was gaining force and the number of visitors to the park was increasing.  This meant there was a lot more disturbance for any birds around.  It was in this area that the Trumpeter Finches are seen.  They are similar to a sparrow but with a red finch bill and pink breast and rump.  The early members who headed straight for this area saw several of these enchanting birds.  The gathering numbers of tourists scarred away the birds so that later arrivals missed them.  The turnoff just before the lighthouse slowly ascends the Sierra to a lookout point above the eastern corner of Spain.  To the north is the coastline heading for Cartagena and in the west is the coast heading for Almería.  We stopped here is look for mountain species but the wind was very fierce at this height and only on lone Black Wheatear was sighted.  On the way down, we saw a pair of pale Buzzards circling over the Sierra.  Peregrine Falcon was spotted along the road here together with Kestrel. 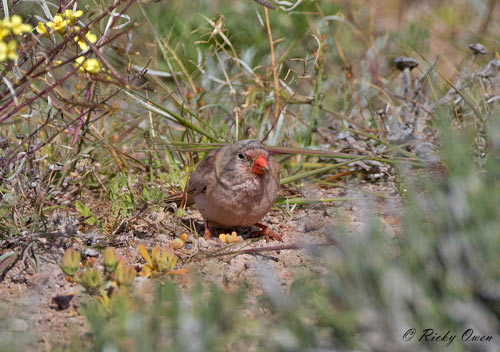 We drove back along the coast road past the Salinas where we had looked earlier, past the town of Cabo de Gata and then alongside the beach to the Rambla Morales.  Here we saw very little and put it down to the time of day (straight after lunch).  But Spanish Sparrows were spotted.  Back at the first hide, we saw more birds including Redshank, Sanderling, Little Stint, Moorhen, Whimbrel, Stone Curlew, Raven and White and Grey Wagtail.  At a small lake across the road, a pair of Garganey where hiding in the reeds and just occasionally we saw them.  Iberian Grey Shrike was seen on the top of bushes and Sand Martins were flying past mixed in with the Swallows and House Martins.  These flocks were feeding on the mosquitoes which were becoming active.  Away in the distance, a Short-toed Eagle was seen soaring on the thermals.  Thekla and Skylark were seen in the area along with Black Redstart and Robin.
It was a great day out and a total of 65 species were seen.  Our thanks go to Bob Wright for hosting the day and providing us with maps of the area and explaining where and what to see.
Lindsey Pheasant
Photographs by Ricky Owen