After a spell of really cold weather here in Andalucia (and in many other places) the annual meeting of the society, took place at Fuente de Piedra on the 21st January. This was just a couple of days after snow had appeared all over the mountains and high land in the area. Ronda had about 25cm and was cut off from the coast on Thursday morning. So with that scenario we duly turned up in layer upon layer of thermal gear, anticipating low attendance.

We were pleasantly surprised; 32 members came along and it actually wasn’t as cold as expected. Though the shallow pond by the entrance was covered in a layer of ice, which was cramping the style of the Stilts somewhat. 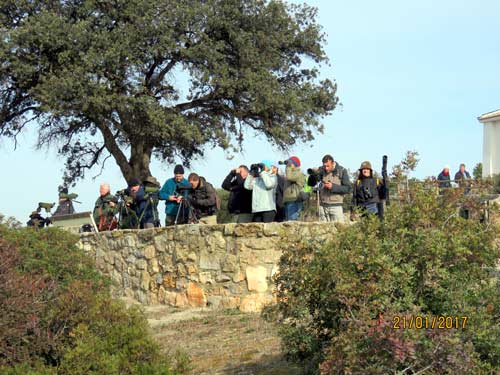 As our group gathered, 3 maybe 4 Redwing and a Song Thrush were seen in the berry bushes to the right of the car park. There was also a dozen or so Rock Sparrows. All rather unusual for here; possibly the cold weather had brought them down from higher ground.

Apart from the Black-winged Stilts in the area of the first pond, there were also Lapwing, Common and Green Sandpiper, both White and Grey Wagtails, some Dunlin, and Common Teal, all looking a bit uncomfortable on the ice, which did thaw out later on. At the edge, almost hidden in the stubble was a nice Snipe. A Marsh Harrier was seen in the distance.

Scouting around the scrubland and bushes to the right of the road we found the usual suspects: Chaffinch, a flock of Greenfinch, Goldfinch, House Sparrows, Sardinian Warbler, Meadow Pipits, Linnet, Black Redstart, Blackbird, Stonechats, Crested Larks, and Chiffchaff. A single Blackcap was spotted.

We did well for Sparrows; besides the Rock Sparrows, we had good views of Spanish Sparrows, flashing bright white cheeks and with clearly spotted flanks. A flock of Jackdaws and a Kestrel flew over, and our Treasurer reported a Little Owl seen briefly in the tall bushes.

But the star of the show was a Bluethroat who obligingly kept foraging around, about 20 metres away. Most adults we see here (subsp. cyanacula) have a white spot in the blue, at the front of the neck, these are winter migrants from central Europe. Our Editor reported seeing an individual without the white spot recently. This could have been subsp. azuricollis which is a bird of the mountains of central Spain.

Walking onto the bridge at the start of the boardwalk, the dryness of the area is very apparent. There is no water outside of the main lagoon and even that is restricted to the southern end, far in the distance. This is despite the very heavy rainfall we had on the coastal area in early December. The storms did not reach inland. So very few waders are around, but from the bridge a group of about 8 Golden Plovers were seen in the field. We also noted a Water Pipit foraging on the dry sand.

Walking up to the viewpoint and the hides, we could see a group of Cranes in the far fields, and in the scopes we could see the Flamingos in the distant water. There is water in the ponds at the back however, and from the hides we spotted the usual gulls and ducks, including Shelduck and a few White-headed Duck. The patrolling Marsh Harrier was spooking the gulls every so often. Lots of Crag Martins were sailing around but no other hirundines as yet.

After the annual meeting and packed lunch, some of the group went on to the Cantarranas viewpoint where we watched a flock of about 600 Cranes land on the scrub and bare sand out where the lagoon ought to be. We need a lot more rain in the area before the breeding season.