Travelling from the drizzle and relative warmth of the coast to our inland destination, we arrived at the  meeting point, Venta El Tropezon 111 on the outskirts of Montecorto, near Ronda, anticipating a cold day’s birding. However we were pleasantly surprised by the bright blue skies and warmth of the sun – or was it the cups of coffee and molletes which were quickly pressed on us by the patron of the venta. Our group of sixteen members quickly arranged ourselves into a smaller convoy of cars, eager to be on our way – onwards and upwards. Along the valley we caught glimpses of Sardinian Warblers also Griffon Vultures perched on the crags. Travelling through the village of Grazalema with its Christmas decorations, morning tourist visitors, House Sparrows and Collared Doves; we finally stopped at a small lay-by above the village. Here we spotted Robin, Chaffinch, Goldfinch, Great and Crested Tit before we moved on to the car park of the Mirador at the top of the sierras. 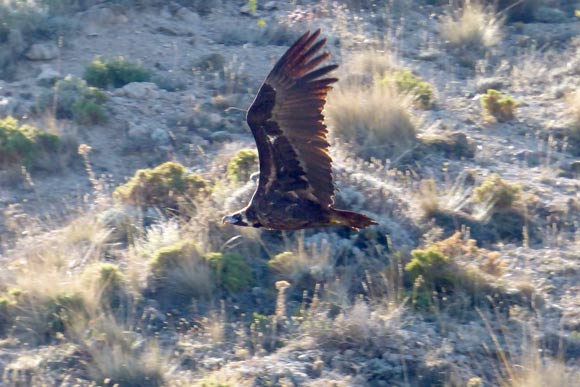 Having parked and picked up our equipment, Frankie, our leader for the day, marched us up the mountain path for a closer view of the Griffons wheeling around and the surrounding stunning landscape.  We were not disappointed and also managed views of more Robins, Rock Bunting, Blue Tit, Common Kestrel, Peregrine Falcon, Raven and a distant Iberian Grey Shrike .

We returned to the car park, eager to search for the local resident and wintering birds around the water trough. Ring Ouzel gave us a fleeting view and a couple of beautiful Dartford Warblers put on a splendid show for us.  Serin, Sardinian Warbler, Stonechat, Black Redstart and Blue Tit were amongst the birds drinking from the trough whilst around the rocky outcrops was a Blue Rock Thrush. Choughs were seen and heard amongst the scores of Griffons. Across from the car park, a Black Vulture was seen perched on a rock before it proceeded to take off and surprise us all by flying low over us showing the tracking device it had attached to its back.  What a super sighting, but then it was time to move down for our lunch at El Largo restaurant. 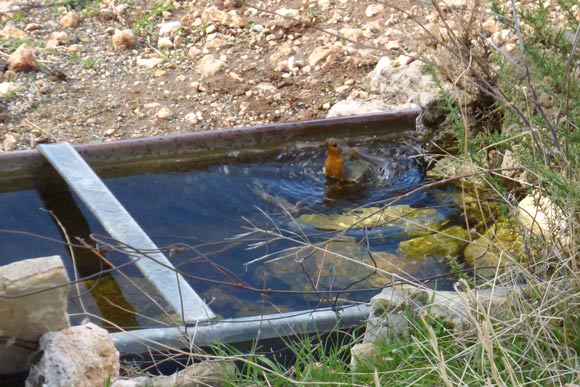 Here we quickly ate the chicken curry provided, anxious to return to the sierras above and to search for more birding surprises. On parking we were rapidly rewarded by a couple of delightful Firecrests flitting around the tree right in front of us, plus Coal Tit and Blackcap and lots of Crag Martins. Searching through the vultures in the sky we also spotted a Bonelli’s Eagle above them, before some more of the group joined us. The temperature was falling and more locals were arriving when a darker shape was spotted as the Black Vulture accompanied the Griffons over our heads.  What an amazing end to a super day in the Sierra de Grazalema around Ronda with 29 species plus the Ibex of course!