The much awaited Isla de Palomas sea watch, the second October meeting, in Tarifa was sadly cancelled on the Thursday before it was due, purely because of the [correctly] forecasted Levante wind.  However as it is now the policy of the ABS to not cancel in its entirety an event, an alternative was arranged – La Janda.  All those who had stated they were attending were contacted by email or phone so that they could make their own decision.  A hardy 11 members joined Javi Elorriaga [Birding the Straits] the day’s leader at the arranged assembly point near the causeway to Isla de Palomas.  Whilst we were being buffeted by the relentless wind and waiting for 15 minutes in case of any late comers a Peregrine decided to give us a low fly past. 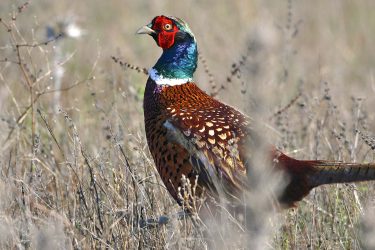 With no more members showing it was decided to decamp to Apolo XI [yes it’s spelt with one ‘l’] for coffee and to organise cars.  Ensuring 4 to a car meant only 3 vehicles in the convoy with each car carrying at least one experienced birder.  Entering La Janda at the Barbate cross roads plenty of small birds were battling the wind in the search for food in the recently ploughed field to our right.  These included Chaffinch, Goldfinch, Linnet, Meadow Pipits and the customary Stonechats sat up on the remaining stalks.  Moving further down the track a couple of large flocks of mixed sparrows went from bush to field.  When they settled many Spanish Sparrows could be clearly seen amongst the predominant House variety.  A couple of Cormorants flew over along with some Yellow–legged and Black-headed Gulls.  Black Redstarts have started to appear everywhere and La Janda was no exception.  A few minutes later White Wagtails, Crested Larks and Lesser Short-toed Larks were spied.  Looking over the paddy fields Green Sandpipers were on the margins whilst Lapwings and Cattle Egrets flew over.  The first Hen Harrier of the day was noted along with Grey Herons waiting patiently in the fields.  Zitting Cisticolas made backward flights [why do they attempt to fly in such conditions I wonder?] but the Jackdaws seemed nonplussed by the high wind. 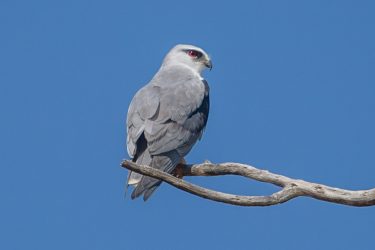 Further on down the track the rice was being harvested and the field was alive with White Storks, Marsh Harriers hunting, a dozen Spoonbills, a solo Great White Egret joining the hundreds of mixed gulls and countless Grey Herons.  The first of 5 Black-winged Kites put on a display for us all, super it was too especially for one member who was able to ‘tick’ a ‘lifer’.  We carried on down the track in the search for the Pallid Harrier found by Ricky Owen the previous weekend, sadly no luck but more excellent sightings of Black-winged Kite.  A Kingfisher attempted to fly across the track; however it was fighting against the wind and decided better of it!
Backtracking and heading up to the farm produced a Squacco Heron, Lesser Black-backed Gulls, Common Kestrel plus many more Marsh and Hen Harriers.  Sardinian Warblers dashed across the track keeping low and out of the wind [sensible little birds, could teach the Zitters a thing or two].  This stretch also produced the customary Wood Pigeon, Pheasant, Red-legged Partridge and some Crag Martins.  On the rise to the farm the second Peregrine of the day came very close whilst hunting taking a short cut between cars one and two.
We stopped immediately after the farm where the tarmac road starts to stretch our legs and have a bite to eat.  To be honest having tried to stop before entailed forcing open the car door [if you were that strong] and having your legs sandblasted – not to be recommended!
Whilst we stopped we noted Chiffchaff, Robin, Booted Eagle, Blackcap and distant Griffon Vultures.
Pushing on in search of Spotted Eagles, as we were approaching the area favoured by them, we briefly stopped to scan for the Little Owls in their rock pile.  It seems the adage ‘wise old owl’ applies to them as no sign of them could be seen in the gusty conditions.  Turning left toward Benalup more Black-winged Kites showed, but sadly no Spotted Eagle, even though Andy Paterson, who we had met up with earlier, phoned us to say one had just passed over his car.  To be honest the wind was so strong it had probably been blown into Cadiz province; however the water to the left produced Little Grebe and some Barn Swallows.  A decision was made to about turn and follow the road back to Facinas in the hope of finding the eagles in the open skies. 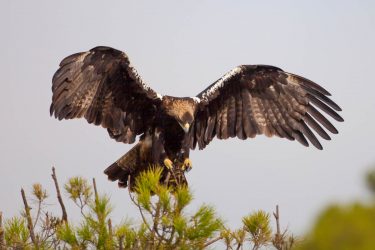 About 3 kms along the track sudden excitement arose as first of all 2 Short-toed Eagles were seen above the vultures and a solo large eagle was seen to the left.  Was this our target bird?  Well some, or all of us thought so but the bird insisted in flying and holding close to the sun making observation extremely difficult.  So being a hardy bunch it was out of the cars, try to stand upright in the wind, grit your teeth for the sandblasting and hope the bird would move.  Bless it, it did only for a second large eagle to join it and to give everyone fantastic, close views of a pair of Spanish Imperial Eagles.  Not much beats this in my opinion and the photographers amongst us had marvellous opportunities for many photos to be taken.  You can look on the ABS facebook site  for some of Javi’s & Ricky’s photos and, trust me, the birds came this close to us all.  I must say that I have never been so close to one Imperial Eagle before let alone two and it made all the discomfort and sandblasting worthwhile.  Javi, who has monitored this pair of birds, explained their nesting site was close by and how cooperation with the electricity company has meant the pylons around their territory have been adapted so the birds could not be electrocuted.  A good conservation in action story if ever there is one.
Luckily Javi is trusted with a key to one of the cortijos so we could take a short cut back to our start point and reunite with the cars left behind. No photos and certainly no group photo as it would have been impossible to expect a tripod to stay upright in the conditions, so you have a full description of the day instead.  We all enjoyed it immensely and it’s a big thank you to Frank and Javi for arranging a good days birding at short notice.