The day started rather cloudy and cool but quickly warmed up once the sun appeared. A large group of over 30 ABS members met at a bar on the outskirts of Bonanza town.From here we drove the short distance to some local ponds where it was reported many birds were visible. 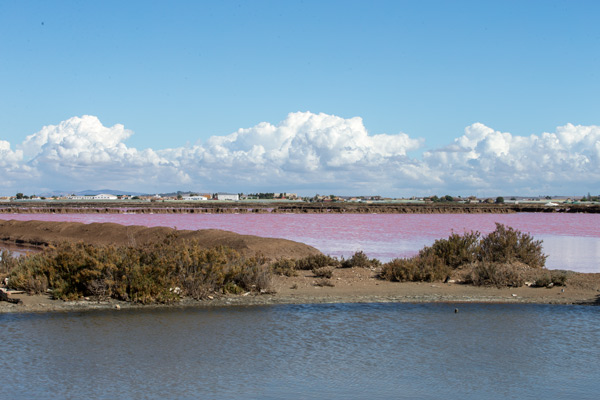 There were Purple Swamphen, Snipe, Little Grebe and Peter Jones spotted a Little Bittern. Only its rear end could be seen in the reeds but as 30 pairs of eyes drilled into it, the tail moved and the bird gave us all a good view as it scampered through the reeds and eventually disappeared. There were also White-headed Duck, Black-winged Stilt, Mallard, Common Coot, Moorhen and Little Egret. A small flock of Common Waxbill flew over and then Green and Common Sandpiper and a female Pintail Duck were spotted. Hirundines were represented by House and Sand Martin and Barn Swallow. Cetti’s Warbler and Kingfisher were heard but not seen until later in the day. Around the ponds in the scrub were Sardinian Warbler, Collared Dove, Spotless Starling, Spanish Sparrow, Reed Bunting, Cattle Egret, Common Magpies and House Sparrow. Also, two Wood Pigeon were seen. 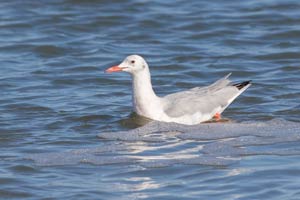 The convoy of cars (at least thirteen of them) then moved onto the saltpans. Here we split up and took our own time to explore the area. It was a great habitat with many different birds to be seen. The most notable bird was the Stonechat; with Northern Wheatear and one Whinchat in evidence. On the pans Greater Flamingo, Spoonbill, Grey Plover, Redshank, and thirteen Great White Egrets were counted. Grey Heron, Caspian Tern and Slender-billed Gull were logged when a flock of Greater Cormorant passed by. Out on the mud banks Ringed and Kentish Plover and Turnstone were present. One member spotted a Hobby that came in low over the metal fence, dropped down to just over bush height and landed on the other side of the marsh. The bird stayed for a good 30 minutes giving most of us time to locate it. It was in this marshy area that two Melodious Warblers were noted as well as Blackbird and Goldfinch. 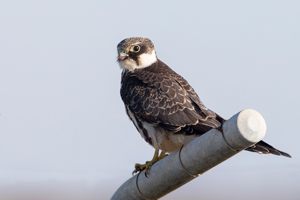 Several raptors were spotted over a building; three were Red Kites (two adults and one juvenile) and an Osprey was seen on top of one of the lamps on the building. A few moments after this a Black Stork flew into view landing close to the river, as did a Common Kestrel. Marsh Harrier was seen in the area quartering the ground. Good flocks of Dunlin were about and a couple of Greenshanks were seen. A Hoopoe was heard and later seen. Back in the lake Yellow-legged and Black-headed Gull were both recorded. We moved back to the village and out to a pond nearby. Here we saw Red-knobbed Coot (collared) and plenty of Black-crowned Night Heron. Also on the pond were Marbled Teal, Black-necked Grebe, Avocet, Shoveler and a Little Stint. Pochard and Shelduck were present. Overhead, four Egyptian Vultures and twenty Griffon Vultures were seen. 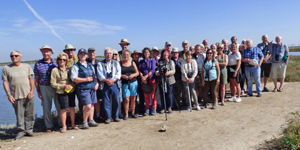 Some members then called it a day and headed back home but a few stayed on to the traverse the woodland to further salt pans. On this section a Lesser Kestrel was spotted and Zitting Cisticola were plentiful. Good raptors in the shape of Black Kite, Common Buzzard and Booted Eagle were noted and a White Stork came out of one of the irrigation canals. On and around the area we saw Meadow Pipit, Crested Lark and two Common Terns were also seen. A Bluethroat was spotted along with Corn Bunting, Chiffchaff, Woodchat Shrike, Pied Flycatcher, Little Swift and Greylag Goose.

It was a great day out (even though there were a lot of us in many cars) with a total species count of 84!

Lindsay Pheasant – ABS member.
With thanks to John and Jenny Wainwright and Derek and Barbara Etherton