Autumnal mornings at last – a welcome relief from what has been the hottest start to September here in Spain for 100 years. A delightful 14c at 0645hrs when we [Derek & Barbara] arranged to meet Bob & Lindsay together with friend Chris under the arches in Zapata to wait for the days leader Luis Alberto Rodriguez who was meeting other members in Guadalmar. Pooling vehicles so that there were 4 in each, 2 cars set off for the early target bird – Red Necked Nightjar. An almost full moon helped proceedings for us and it took but a very short while to locate the first of the nightjars. In their usual area, on the seemingly favourite track, we found 4 birds in double quick time, however as there were four sets of eyes looking at them [car headlights] instead of the usual two they seemed to sense the difference and were flightier than normal.

Having cracked that and it still being pre-dawn we decided to view the top ford from an elevated position that Barbara & I have started using. This position is proving very productive for birds and today was no exception. By the light of the moon we soon had Night Herons flying in to their roost and by using a powerful LED torch Little Ringed Plovers and Common Sandpiper could be seen feeding. As first light shone weakly over Malaga the skies began to fill with Cattle & Little Egrets leaving their roost in the valley, the first of several Common Swift were viewed and a little time later Barn & Red-rumped Swallows along with House Martin. 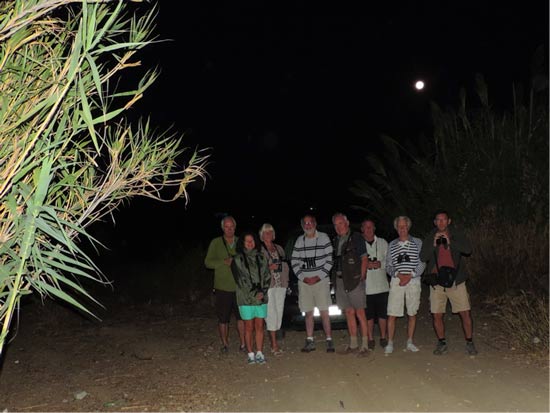 It’s amazing just how quickly the light improved as a slowly rising sun started to overpower the moonlight giving allowing us to see the first Kingfisher of the day [many more to come!] and then a Grey Wagtail appeared below us. Two of us were fortunate to spot a Little Bittern fly out of the reeds below and head down river. Within 5 minutes the light had really improved and we were rewarded with a close eye level view of a female Marsh Harrier searching for breakfast. The Jackdaws having returned to their site partook in a disagreement with a Common Kestrel on the motorway bridge. Grey Herons appeared to take up feeding positions and Cetti’s Warblers started calling as only they can. Crested Larks, Chiffchaff, Greenfinch and many Goldfinches started their daily ritual [feeding] as the sun produced the first warm rays.

Moorhens, Coots, Common & Green Sandpipers appeared busily feeding and a Kingfisher perched briefly on the log close to us. Spotless Starlings and Blackbirds were noted but then excitement arose as a Little Bittern [male] was spotted skulking in the reeds opposite. This was super as it was also a target bird for 3 of our members who had never seen one before and lovely long views of this little charmer made for a very happy group.

Serins [big flocks now], Zitting Cisticolas, Collared Dove, Hoopoe, Sardinian Warbler and Blackcap were feeding and moving around below us. So much to see in the now daylight [0815hrs] but reluctantly we had to move on, bearing in mind we had the rest of the group to meet at 0930hrs and we had to stop for breakfast. Moving out we called round for a fleeting visit to the main reed bed to add Common Waxbills and Short Toed Larks [also new ticks for a couple of members], Purple Swamphen, Sand Martin, Stonechat and Monk Parakeets.

40 birds in a little over 90 minutes wasn’t a bad start, so it was off for a much deserved ‘Cantalania’ y cafe en route to the 0930hr meeting point. Awaiting us were another 11 ABS members including 5 whose first visit was today, and we all hope will join many more trips.

Starting out along the track at Guadalmar a Grey heron was spied sitting in a eucalyptus tree on the other side of the river and whilst we watched a Turtle Dove was seen to fly in, only of course to hide itself in the foliage. Searching for a glimpse of it we all noticed a Sparrowhawk fly in and stay briefly before moving on to the next tree. It repeated the same manoeuvre through the trees before making a dash into a bamboo clump chasing its breakfast; no luck as it soon flew out and headed Malaga way. On the green bridge Red-rumped Swallows were flying and on land nearby were Sardinian Warbler, House Sparrow, Zitting Cisticola. A noisy group of Monk Parakeets then flew over.

Heading for the hides on the far side to start our watching, ensuring the sun was behind us, LA decided to split the group into 3, mainly because trying to fit 19 persons in one hide is not a brilliant idea! So 6 stayed in the first hide, 6 or 7 the next while the rest of the party walked down to the open water where the gulls and waders congregate. However en-route an obliging Melodious Warbler posed on one of the Tamarisk trees.

The first hide produced White Headed Duck, Mallard, Teal, Little Egret, Coot, Moorhen and Black-winged Stilt. Moving on to the second hide a juvenile Greater Flamingo landed as we sat down, a Snipe was spotted under the tree on the main island soon to be joined by an inquisitive Greenshank. 2 Sedge Warblers showed beautifully on the waters edge allowing a ‘scope to be employed so that the group could all view them. Then 2 Cetti’s Warblers flew into a low Tamarisk in front of the hide giving views of a bird so frequently heard but not so often seen. However the star bird here was a Bluethroat [cyanecula] showing and posing for all to photograph as it moved around in the open area between reeds – again a first for a few members. Later it was joined by a Reed Warbler and 2 Kingfishers darting across the water kept us fully occupied. Leaving the hide to walk to the sea watch point a bird was seen in the top of one of the larger trees which was eventually ID’d as a Tree Pipit, whilst on the other side of the path an Olivaceous Warbler was giving excellent views soon to be joined by a Chiffchaff.

On to the open water that contained hundreds of gulls and a fair few waders. The gulls consisted of Black-headed, a few Mediterranean, Lesser Black-backed and Yellow Legged. Waders included Ringed and Kentish Plover, Dunlin [still in breeding plumage], Redshank, Ruff, Curlew Sandpiper and a fair sprinkling of Bar-tailed Godwits.

The sea view point produced nothing new and we decided to forgo the delight of the male human species without plumage on the nudist beach and retrace our steps to visit the main lagoon calling in at Escondido en route. Stopping in the hides again for short breaks from the now very hot sun we added nothing new to our list, but again enjoyed the ‘show off’ Bluethroat. As LA and his group occupied the Escondido hide we went straight to the main lagoon hide soon to be joined by the other little group who had braved the beach sights and added a Northern Wheatear [avert eyes and march on!]. In front of us was an impressive group of 4 Curlew Sandpipers, 4 Avocets at a greater distance, more Barwits even further away and about 10 Grey Herons scattered throughout. Loads of Collared Doves sat in the trees as did Spotless Starlings and a Blackbird flew in front of the hide. Barbara spied a Sparrowhawk in the far distance over Malaga, we all tracked it and eventually it passed over the lagoon and hide scattering all the Ringed & Kentish Plovers and causing the Curlew Sandpipers to depart in a hurry. 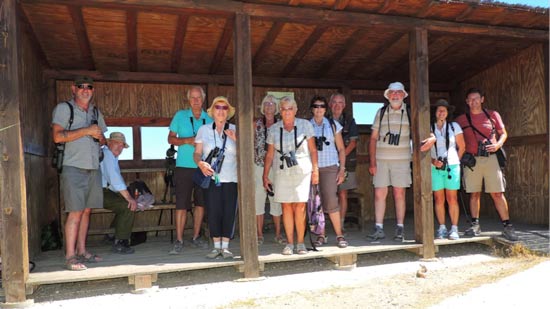 By now it was 1400hrs, hot and rather energy sapping so a group of 5 of us decided to leave popping into Escondido hide as a last call. Pleasingly we added Shoveller, Little Grebe, Pochard and Mallard to the list and were well entertained by a very close Kingfisher [female] fishing for lunch. At one stage we had 3 of the birds zooming over the lake. A good way to end the entertainment, or so we thought!

It was not to be because on the way along the road toward the church a Hoopoe stayed very close to be seen by all, but the puzzle of the day was to come next. Approaching the car parking area we noticed an unusual call and movement in the large eucalyptus trees, a quick search found an adult bird feeding a very insistent youngster. In some light the bird looked a cross between Greenfinch & Serin with a bit of Canary thrown in.

Luckily one of our group took many photos of the birds leading to much research overnight. Now if the parent bird had been a male of the species it would have been so easy, but life as a birder is not like that is it!! With the help of a local expert and being told to ‘think outside the box’ the penny dropped – Black Headed Weaver! Now we’ve seen them a few times on the reserve, if lucky, but never away from the areas where they are usually seen and if it had been a male bird providing the food – no, that would have made identification far too easy. 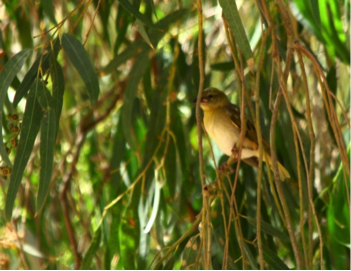 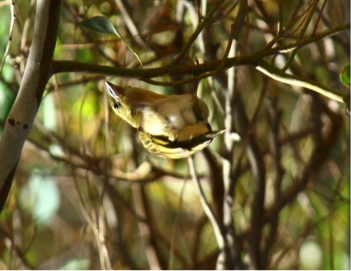 Photos by: Bob Carr of a Black-headed Weaver

A smashing days birding, the full list of both visits is below, it just leaves me to say on behalf of all, thank you Luis Alberto [LA] for leading and the group photos.

Birdlist of the Day. Total of 81 species