Saturday 3rd September 2016 proved to be a strange day weather wise as we were all totally unprepared for the wind. It had been calm at home. We all arrived at the meeting point for 09.30hrs in mist and gale force winds.  The temperature ranged from 23C in the morning to 34C by mid afternoon. Approximately 30 members turned up and after pooling cars we went to the new Cazalla Bird Observatory near to Tarifa. What an amazing couple of hours we had; Egyptian Vulture, Honey Buzzard, Black Kite galore, plus several Booted Eagle, Osprey, Peregrine and a solitary Long legged Buzzard. They weren’t just dots in the sky, but right in front of us with wonderful views and many members managed to get excellent photographs. Mind you, we had to be careful we weren’t blown off the observatory! 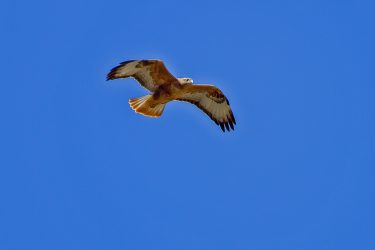 We departed for coffee (which we will be able to get on site when the observatory actually opens) followed by slow drives through the paddy fields and fields of La Janda.Many species were spotted, including Little and Cattle Egret, Glossy Ibis, Jackdaw, Montagu and Marsh Harrier, Roller, Zitting Cisticola, Bee eater etc etc.At 16.30hrs the group split up and some of us did our own routes for a couple of hours. Some of the group found Black crowned Night Heron but the highlight for Peter, Janet and myself were two melanistic Montagu’s Harrier. They were quartering the rice fields for ages, and then along came a Hen Harrier. We advised him not to go to the UK.

I believe that 77 species were seen that day, after adding everyone’s lists and we certainly had a multitude of raptors. What a super day it was.