The society holds two formal general meetings each year, as required by our statutes as a registered organization. The Ordinary General Assembly in January focuses on our finances, whilst the July Extraordinary General Assembly is about electing the committee and the officers for the next two years. But first we have a few hours birding of course. 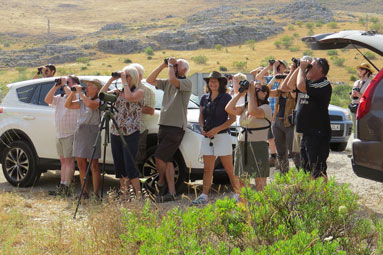 On Sunday 10th, forty two members braved the soaring temperatures to meet at Finca Algaba, near Ronda. Pooling cars and splitting into two groups we set off in search of birds who were grabbing a meal before the midday heat drives many of them into the shade. A total tally of 30 species was respectable considering the temperatures were nudging 35 degrees.

One group followed the Algeciras road stopping on the roadside near a path to the remains of a prehistoric dolmen. Here we had great views of Woodchat Shrike and Dartford Warbler, with the Griffons circling the peaks beyond the dry fields. One lucky chap, though infuriatingly without camera to hand, spotted a Rock Thrush which quickly vanished, sadly. 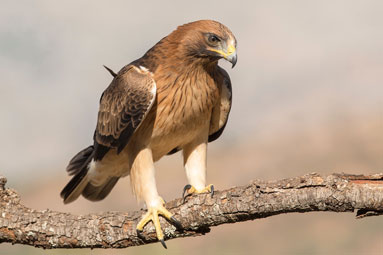 On to the viewpoint just before Atajate village, we were pleased to see a dark phase Booted Eagle and Short-toed Eagle. Backtracking to the Alpandeira road, we stopped on a rough track and now a light phase Booted Eagle came into view. A smart Black-eared Wheatear was briefly on the rocky horizon nearby. Before long, a Peregrine sailed around us. As it neared a rocky crag, the two chicks joined it before they all disappeared behind the rocks. 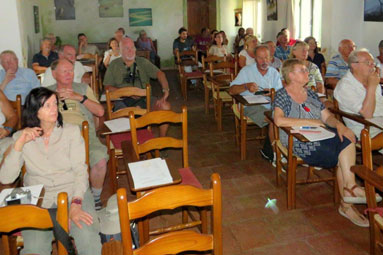 Returning to Finca Algaba, The Vice-President Peter Jones led the meeting to re-elect committee members who were all re-standing for election, but pointing out that a new treasurer will be required from this calendar year end. We then had an interesting but sombre presentation from Juan Martin Bermudez on our conservation project, La Covacha, where spring tides have washed away part of the perimeter embankment walls. It seems that the measures to encourage the nesting of Spoonbill and Osprey are virtually on hold until Salarte can enlist more sizable support and funding. A full update is in the summer edition of the magazine which is being posted at the moment.

Following the meeting, the members had a splendid lunch provided by the ladies of La Algaba, or tucked into their own picnics in the shade of the Holm Oak trees outside in the courtyard.