The Field trip this month was to Almagro, an historic town in Castilla-La Mancha.  It is here that Don Quijote had his adventures and passed his time with Sancho Panza in the fictional works of the Spanish Golden Age written by Cervantes.  The town itself is centred around the Plaza Mayor with many buildings dating to the sixteenth century.   The bird watching started with our guide for the day Vicente Malagón Sanroma and a drive around the steppe lands of the region.  Here is the heart of cereal growing in La Mancha with many very large fields of wheat and barley.  The group’s first stop was to see Choughs and Gull-billed Terns.  Both species are unusual in such a place, as the former are found in mountainous areas and the latter in wetlands.  But here they found a good source of food.  The terns were harassing Spotless Starlings in order to steal their food.  In the corner of the field was what the group had been hoping to see: a Little Bustard.  Several others were seen later in a similar area.  We were also hoping for Great Bustard but did not find any.  The group drove around the farm tracks alongside the fields with Crested Larks flying overhead and many other birds such as Red-legged Partridge, Magpie and many Swifts, House Martins and Barn Swallows seen along the way.  There were plenty of Wood Pigeon and swooping low over the track were saw a covey of Pin-tailed Sandgrouse.  A wildcat was spotted in the crops slowly meandering its way through the cereal before disappearing over the ridge.  Quartering the fields, we spotted a male Marsh Harrier and a little later its mate.  Other birds seen were Kestrel, Raven, Lesser Black-backed Gull, Bee-eater, House Sparrow, Corn Bunting, Calandra Lark and White Wagtail.  A Montagu’s Harrier was also spotted.  Throughout the day we saw Rock (feral pigeon), Stock and Collared Dove. 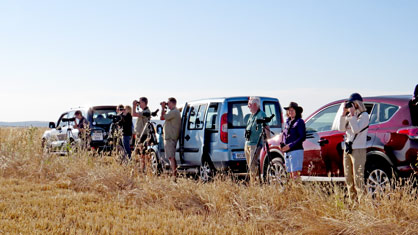 The group then moved onto a ruin where the old farmhouse had been abandoned and birds had colonised it.  There were Jackdaws, Stone Curlew and Lesser Kestrel. A Hoopoe was nesting somewhere within the building.  A Little Owl flew onto a fence post and posed and two Black Vultures soared by effortlessly.   A little further on near the shallow remains of a river many songbirds were spotted.  There were 5 species of bird perched on the fence: Bee-eater, Corn Bunting, Stonechat, Spectacled Warbler and Spotted Flycatcher.  Unfortunately they were just too far away to get a good photo of them.  Red-rumped Swallow, Goldfinch, Linnet and Penduline Tit were also present.  A hare ran across the field and dived between the rocks.  Several groups of bike riders passed by pedalling over the rough track following the long distance “Ruta de Don Quijote”.  They were suffering in the heat of the day which by now was nearly 30o centigrade.

The group drove onto to a much larger river which was engulfed with reeds and shrubs with a variety of habitat.  These areas often dry out completely in the summer months but there was still a good amount of water here.  There was a large flock of sheep being shepherded by the farmer and his dog.  Many of them wore sheep bells around their necks which jingled as they grazed the shrubbery.  Again, lots of songbirds were seen such as Melodious, Subalpine, Sardinian, Dartford and Great Reed Warblers, and a female Golden Oriole flew above the trees. Someone saw a Little Bittern walk between the reeds but most of us missed it.  Spanish terrapin were present on the banks of the river.  Zitting Cisticola and Cetti’s Warbler were noticed by their calls before being seen.  A Spotted Crake was also heard but we were unable to locate it.  Far off in the distance, a Golden Eagle was briefly viewed.

It was then a short drive to the volcano.  The region is volcanic and there are a few features which illustrate this such as the naturally carbonated spring.  As you peer at the water you can see the bubbles coming from far below.  The extinct volcano is small and is being excavated so small grains of lava are present everywhere with their dark black/brown appearance giving the area a sinister look.  From the top there was a fantastic view over the whole of Castilla-La Mancha: the steppe lands to the north and the vineyards to the south.  These vines supply the important wine producing area of Valdepeñas.  In the far distance there were mountains both north and south.  The northern chain is the Sierra de Toledo which separates the Spanish plain from Madrid.  To the south is the Sierra de Morena the natural boundary of Andalusia.  Here at the base of the volcano, there was a municipal rubbish dump crowded with White Stork, Grey Heron, Cattle Egret and Black Kite.  It was good to see the birds but a shame about their surroundings.  Up on the summit, the air was sweeter smelling and Blackbird, Thekla Lark, Black-eared Wheatear, Southern Grey Shrike, Skylark and Rock Sparrow were identified. 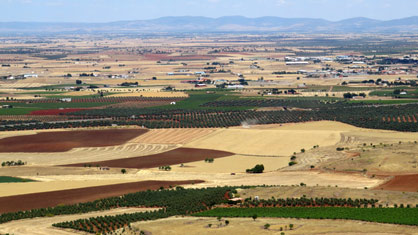 In the nearby hills, a picnic lunch was eaten in the field before a walk up to an old windmill.  This was the type that Don Quijote fought in his battles with monsters.  Now it is disused and unmaintained.  It will soon fall into disrepair.  But for the group it held a distinct advantage: a Black Wheatear had made a nest in the top having access through the broken window.  It was fascinating to watch the little bird fly in and out with beakfuls of insects feeding its young.  Cruising the skies above were several Short-toed Eagles; an adult and some juveniles.  The adult was attacking the youngsters to defend its territory.  The immature birds quickly flew off.  Other birds seen in the area were Azure-winged Magpie, Great Tit, Greenfinch, Serin and Rock Bunting.

The last visit of the day was to the wetlands near Damiel.  We took a detour round a factory and some fields which had been sprayed with slurry.  There was a deceit (yes, that is the collective noun) of Lapwing probing the soft ground.  Mixed in with them were several Yellow Wagtail.  Moving on from the smell we arrived at the lakes and ponds frequented by waterfowl.  There were ducks: White-headed, Mallard, Pochard, Red-crested Pochard, Shelduck, Ferruginous, Gadwall and Shoveler; warblers: including Savi’s and Reed; grebes: Little, Black-necked and Great Crested and Greater Flamingos. Other waterfowl seen were Common and Green Sandpiper, Cormorant, Black-headed Gull, Avocet, Coot, Moorhen, Whiskered and Black Tern, Black-winged Stilt, Black-tailed Godwit, Roller, Collared Pratincole, Little Ringed Plover, Greylag Goose, Squacco Heron, Little and Great Egret, Redshank and late in the evening as we were about to leave a Glossy Ibis flew by gracefully.  This was a great way to end a brilliant day.  A grand total of 102 species were seen.