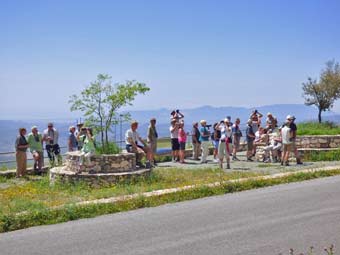 For the early call, 06:00hrs., 5 insomniac members plus Luis Alberto met in the dark in the [vain] hope of the Eagle Owl calling at El Torcal.  Disappointed maybe, cold certainly, but downhearted, never; we managed a good selection of early birds waking from their slumbers and also admired the amazing full moon.  Peregrines performed, vultures lifted off and song birds sung so all was not in vain.

At the main call of 09:30hrs the more sensible, or those who had the longer travel, met after coffee to ascend the main road to El Torcal’s visitors centre.  As there were 27 members, the party a split in to two groups to walk the green path, one going clockwise the other the opposite.  Just about everybody managed views of Sub-alpine, Melodious and Bonelli’s Warblers along with Blue Rock Thrush and countless Black Redstarts.  Many Ibex with their young added to the pleasure.

Lunch was taken in possibly the windiest spot in Andalucia so it took as short as time as possible before heading off to complete a circuit of the rock by road.  In various lay-bys we were able to view Honey Buzzard, Bee Eaters, Thekla Lark plus many other small birds.  A couple of our party even managed to view and take photos of a target bird, a Spectacled Warbler.
This is intended as an extremely brief resume of today’s journey a full and comprehensive report will be published in the Summer edition of the ABS magazine.