For the second April 2016 meeting 30 members of the society met at Abades services on the A92 at Loja for a Wednesday  mid-week birding and wildlife trip lead by Mick Richardson.  As the group was too large for one convoy it was decided to split into two and also ensure four to a car to minimise vehicles; so two parties of four vehicles, one lead by Mick and the other by Bob Wright set off.  By staggering the starting points for each group it meant less crowding and better access to plant and wildlife information by the respective leaders as we drove up the mountain track. 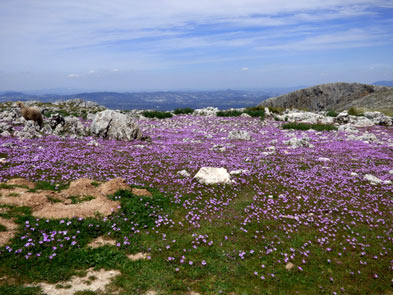 We were with Mick Richardson and our first stop was at the lower quarry where we immediately found Spotless Starlings, Black Wheatear, Black Redstart, Blackbird and House Sparrows, Wood Pigeon, Barn Swallows and House Martins.  Moving on after some 15 mins we stopped in the turning area before the second [large] quarry.  As we walked the track Mick was able to show and name all the orchids and other wonderful flowers that seemed to be everywhere.  Birdwise we encountered Chaffinch, Serin, Red Legged Partridge, Chough, Stonechat, a brief glimpse of a Dartford Warbler [better was to come] and Woodchat Shrike.  Reaching the large quarry in the hope that the Eagle Owl may be in residence was met with a little disappointment as no sign of the bird could be found.  However Jackdaws, Crag Martins, Black Redstarts, Blue Rock Thrush, a heard but not seen Bonelli’s Warbler, and Crossbills were added to the list.
Returning to the cars and starting the ascent up the mountain we stopped at an area known for warblers in the hope of adding to our list.  No warblers except Sardinian, but Azure Winged Magpies flew around as did Hoopoe, Thekla Lark, Linnets and a common Kestrel patrolled the higher rocks. 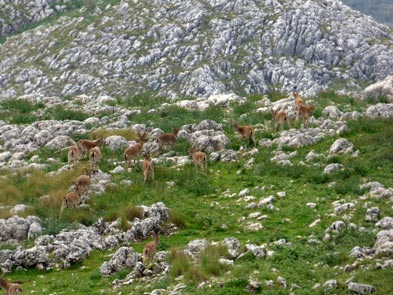 Moving on again, making space between ourselves and the other group, we stopped at an area that in previous years Spectacled Warbler could be found.  Would we be lucky?  Immediately the answer was yes as a beautiful male bird sat on top of a straggly broom bush and sang his heart out, everyone getting super views through bins and ‘scopes; some even managed photos.
Moving on again to the electricity management area for my pet hate, wind turbines, [or BSD’s as I prefer to call them] we looked for the Little Owls that are normally in residence around the sheep pens.  We just located one sitting on the high point of the wall but it decided to be shy and flew off out of sight.  Never mind, better sightings of them were to come later, but meanwhile we could add several Black Eared Wheatears to our list.  Driving further up a super male Rock Bunting decided to sit on a rock close to the track side and sing for us all whilst many took photos.
It had been decided that we would regroup as a whole at Charca Negra [Black tarn] for our picnic lunch.  Arriving first we were rewarded with a second male Spectacled Warbler in full song mode close to the shepherd’s casa, so we all had more excellent sightings.  As sandwiches appeared so too did Griffon Vulture [surely a coincidence?], Rock Sparrows by the dozen, a further Little Owl on top of the rocks, both Common and Pallid Swifts zoomed over rather low but much higher up in the sky Alpine Swifts were seen. 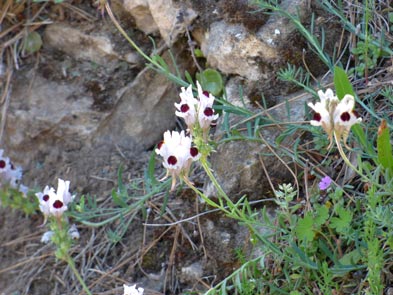 Feeding time over we pushed on to try for another of the days target birds – Rock Thrush, or Rufous –Tailed Rock Thrush to give it its full title and we didn’t have far to travel before a handsome male bird presented itself to us sitting on a low rock at the side of the track.  Easy for the lead car but not so good for the three behind, but thankfully the bird seemed to understand the situation and so flew a short distance across the track and perched in the afternoon sun in full view of everyone on a slightly higher rock.  Even better was to come when its partner joined him to pose for us all.  What wonderful views we had and the birds seemed unfazed by all the attention they received.  Moving on after a considerable time we hoped to spot the Scop’s Owl found near here by Barbara a couple of weeks ago, alas no luck but fortune smiled on us as a close by tree contained a pair of Western Orphean Warblers and a solo [male] Pied Flycatcher.
Driving back down again we encountered a large herd of Ibex (26) and then several stops were made for  close views of Stonechats [with young],  Black Eared Wheatears [posers aren’t they!] and more Thekla Larks.  Half way down everybody quickly decamped from the cars as a low passing Golden Eagle [adult] gave us super views and lo and behold 2 mins later a pair of Bonelli’s Eagles repeated the performance.
A quick visit back to the main quarry produced Short Toed Treecreeper [long title for such a tiny bird!] a solo Black Kite, Collared Dove and extended close views of a pair of Dartford Warblers.  As the group rejoined we could give our thanks to Mick Richardson, ably assisted by Bob Wright, for a smashing day full of birds, flowers and information, say our farewells and head back down the motorway.