A really lovely day, breeze sprung up later.
We arrived at the Lidl car park at about 9am and met up with John & Maureen Taylor, who had also arrived early. While we were here we spotted Pallid and Commmon Swift, Barn Swallow, House Martin, House Sparrow, Spotless Starlings, Yellow-legged Gulls and Stonechat.
After everybody had grouped and cars were allocated we set off for one of the ex-military sites at approximately km89 on the coast road. Our first detour was a blank but Frankie soon had us on the right track again and we gained the correct turn-off. Before we approached the initial car parking area we had Nightingale, Wren, Sardinian Warbler and Stonechat. And at the car parking area we saw Griffon Vulture, a Little Owl gave everybody good views, Bee-eaters were heard several times but not located as of yet, a few Crested Larks were seen here and as we were about to get in the cars to move down to the next viewing site a flock of 16 Black Kites sailed high overhead. 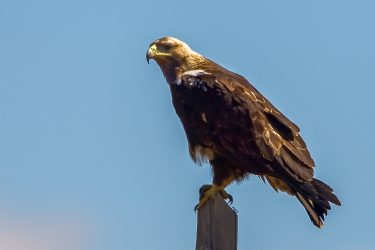 Taking the very long steep descent to our next stop-off point several more Sardinian Warblers and Stonechats were seen and at the stop-off we noted Northern Wheatears, a Tawny Pipit, Stonechats and a Yellow Wagtail, whilst on the rocks below us a Whimbrel, Cormorants and Yellow-legged Gulls were noted. Then a single Short-toed Eagle followed by a group of four Short-toed Eagles were spotted and just on the horizon a flock of Spotless Starlings flew by.
Moving on to the ruins where we managed to locate the Little Owl tucked away in the eaves of the old house on the ridge, more Bee-eaters were heard, then a Booted Eagle passed by, followed by a Short-toed Eagle and more Black Kites. Over the sea our Norwegian guest found three Gannets (two adults and a juvenile) and around the ruins two Crag Martins were seen.
As it was close to lunch we decided to have coffee at Apollo 11 on the N340 at Tahivilla and from here we moved along to La Janda, en route seeing Song Thrush, Cormorants and another Short-toed Eagle.
As we came off the N340 our first encounter was three seperate Woodchat Shrikes, followed by Corn Buntings, Stonechats, Zitting Cisticola and a Common Kestrel. Above us White Storks circled and a few more Black Kites were seen as well as a Griffon Vulture.
Moving down to where the embankment track starts we parked up and noted three Purple Gallinules, Mallard and Shoveler in the canal here. Along the track at the flooded areas, we saw Glossy Ibis, Cattle and Little Egrets, Spoonbolls, Jackdaws, Mallard and Shoveler and Black-winged Stilts. In the field behind the flooded area we spotted a female Marsh Harrier and a Quail was heard in the crops alongside here. A Red-rumped Swallow flew low over the group while above us two Peregrine Falcons were spotted circling over two White Storks, then a White Stork came round us carrying in its bill a snake or possibly an eel, a few more Yellow-legged Gulls were seen and two Bee-eaters were seen over the fields.
We the turned right off the track heading in the direction of the dam. Here a Grey Heron was seen as well as the usual nesting Cattle Egrets in the tree belt along the track to the first bridge. Here we parked up and a Pheasant and a Red-legged Partridge were logged as well as Montagu´s Harrier, followed by (I think the star of the day) an adult Spanish Imperial Eagle. It was perched on the pylons quite a distance from our viewing point at the bridge but a few of us did get some recognisable shots of the bird. So through the flooded road where Goldfinches, Greenfinches and Cetti´s Warblers were logged. Just prior to the farm several Pheasants were seen as well as Jackdaws and a Woodpigeon plus a few Collared Doves.
We stopped at the large gate along the track and looking over the meadows we found the rock pile where we led to understand Little Owls were to be seen, lo and behold within a few minutes the head of one then the other one we seen peering at us, one of these flew left onto a post then into a small bush, it was then harrassed by a Woodchat Shrike until it vacated the bush.The latter bird were in good numbers hereabouts and almost every bush seemed to have the “white breast”, shining from it. A huge number of White Storks came high across the shed on the horizon as did Black Kites, two Common Kestrels hawked the meadows here and good numbers of Goldfinches were feeding in the meadow itself. A Montagu´s Harrier flew across the tracks into the grove and then a Cuckoo followed rapidly a few minutes later. Five Bee-eaters were then seen across the top of the grove and it was about this time that the group started splitting up, some to leave for home some to go to other areas, but as they were leaving a Melodious Warbler and a pair of Subalpine Warblers were noted in the flowers alongside the fence.
Jenny and I along with John and Maureen Taylor decided we would finish the rest of the circuit and then head down for Barbate. Along the circuit we had good views of Bee-eaters, Grey Heron, Corn Buntings and just as we were to leave the reserve a male Whitethroat flew out of the grasses and gave us a farewell rendition before disappearing back into the grasses.
A very successful days birding.