Luis Alberto, leader for the day for the ABS June meeting at Guadalhorce, Malaga suggested that those whose alarm & body clocks allowed rising from the ‘pit’ at a very early hour may like to explore Zapata [north of the airport] in search of Red Necked Nightjars, Night Herons, Little Bitterns amongst others.

So along with LA were Mick Smith and yours truly and what a start we had. Although still dark,  but with the first glimmer of dawn showing over Malaga, the first bird seen was number one target, Red-necked Nightjar. 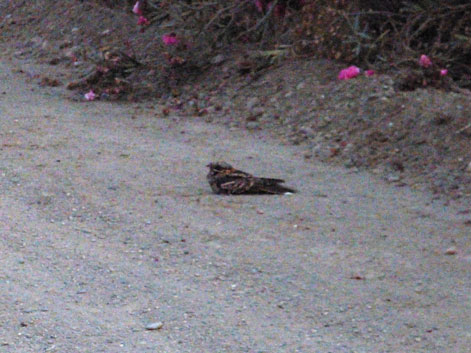 The first was unusually located sitting on the railings on one of the landing light piers.  It soon flew down to the track soon to be joined by 2 others.  The dawn was fast breaking, our eyes adapting and the birds clearly visible with both bins & ‘scope.  Delightfully [as it happens to be my favourite mammal] a couple of hares were on the track together with the nightjars.  Eventually we located three birds with one in particular flying, the others just sitting.  By now Crested Larks were around at 0630hrs and the nightjars disappeared.  With the lightening sky Cattle Egrets were leaving their roost to seek feeding grounds.  Walking down to through tall reeds, scrub and tamarisk we were amazed at the quantity of Yellow Wagtails departing the reed roost to our right.  No exaggeration, there must have up to 50 birds.  Greenfinches were calling and Cetti’s Warblers seen before being heard!  The first of the Night Herons flew over along with countless Cattle Egrets and many Yellow-legged Gulls were about. 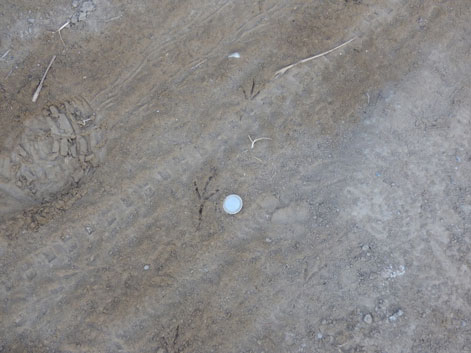 It was this track that a Water Rail was viewed last Thursday, alas no luck today but we did find suspicious footprints that seemed to support this, seen in this picture, a one euro coin is the scale.

Walking back up to the main track the reed filled ditch was now alive with bird song.  Underneath the concrete structures the Red-rumped Swallows were busy at their nests.  Zitting Cisticolas seemed to everywhere and seem unfazed by us walking past.  A group of 4 Turtle Doves flew over.   Viewing the fenced off large field belonging to the airport authority we found Red-legged Partridge, Crested Lark and eventually Short-toed Lark, the light so good now we could view well with a ‘scope.  A hare was lazing around at the back putting it’s front legs up on the low wall looking for the exit door!  We walked down to the opening where Moorhen was seen and the three of us decided breakfast was calling, but before turning back a strange bird flew briefly down onto the track and then immediately into the reeds, but very viewable. 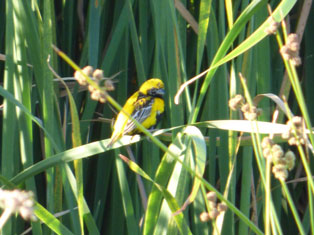 We photographed it and ID it as a Weaver of some sort, googling it later it was a Yellow-crowned Bishop [Golden Bishop].  Walking back to the car and as luck would have it a Little Bittern obliged by flying over the reeds.

It was a total of 13, including our leader Luis Alberto, who gathered at the Guadalahorce church, not to pray but to bird!  Entering the reserve we first viewed Common Kestrel dropping on to prey on the river bank. 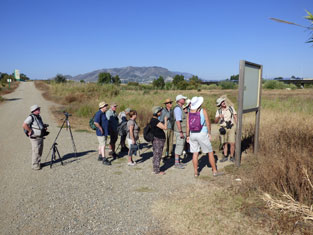 Sardinian Warblers flitted in and around the bushes and a fair few Greenfinches were around.  Onto the bridge and many House Martins, Common and Pallid Swift and Barn and Red Rumped Swallows were feeding well over the water.  Moorhen and Coot [Common] were around.  Some members had not visited this site before so LA took the time to explain it’s history with help from the information board.

We walked towards the first Laguna, Casillo,  in the quest for Little Bittern stopping before the hide to view the top part of the laguna.  Here White Headed Ducks, Black Winged Stilt were viewed and close to a lone female Mallard a little body was seen swimming to the thick sedge.  Apparent it was a Water Vole  it was soon joined by a second one only to disappear into the reeds.  On to the hide and Reed Warblers were busy calling and feeding young.  Coot, Moorhen and Little Grebe were very visible, sadly a Little Bittern wasn’t!  Moving down to the next hide it was apparent how much evaporation had taken place since my last visit 8 days ago, if it doesn’t rain soon this stretch will be dry.  Along with the Black Winged Stilt and their young were Little ringed Plovers being severely harried by the former and a  couple of Little Egrets had the pick of the fish in the diminishing water!  A couple of Bee Eaters were calling and feeding and House Sparrows flitted around.  Zitting Cisticolas were busy, Yellow Legged Gulls flew over and an animal, possibly a large rat was spotted in the scrub.  Moving on down towards the sea the fast disappearing water on the right hand side contained a good number of Audouin’s Gull and both a lone Cattle Egret and Black Headed Gull.  A single Kentish Plover was discovered but soon more were found.  Nearer to the beach Crested Larks were either side of the track.  A lone Common Sandpiper was close to the beach.  Choosing not to walk along the beach [guess why??] we retraced our steps and as we did a Grey Heron flew over.  Visiting the hides now in reverse order nothing new was found.  Walking around to Laguna Escondida a Purple Heron obligingly flew in only to disappear around the corner, but not to worry it soon reappeared to be appreciated by all.  Common Pochard and a couple of Shovellers in eclipse plumage were at the back of the lake. 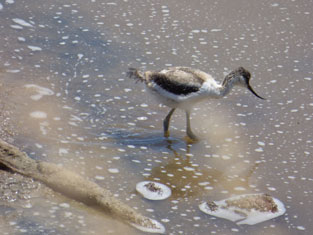 Moving on towards Laguna Grande it became apparent that the algae growth in the  shallows was turning the water ‘chalky’ and rather unpleasant to the nose!  From the hide itself Yellow Wagtail and Ringed Plover joined the list.  A Spoonbill was resting on one of the smaller islands.  Soon the chicks of the Avocets were close to the hide with the parents nearby.  Amazing how fast these little fellows have grown in a few days.  A Yellow-legged Gull had the temerity to fly over the youngsters provoking a parent Avocet on duty into fighter plane action,  perhaps copying the Spanish Air Force who were very active from the nearby airport.

By now it was fast approaching 1400hrs and getting very hot so it was time to retrace our steps back to the cars.  Blackbird and Collared Dove were added and a detour to show some members a Red-rumped Swallows nest under the bridge was made.  Back at the church we all thanked Luis Alberto for guiding us and departed our own ways home.  A long [especially for some] day but worthwhile……thank you LA!

Hope I’ve not missed any obvious birds from the list, you’ll soon correct me I know!  Oh…and the title Birding ‘n Banter?  It’s what we do when walking around, it’s what makes the day more enjoyable of course!