I always look forward to ABS field meetings. They are a chance to experience different birding sites, perhaps in areas we haven’t yet explored, with the benefit of local expert guides and the prospect of seeing interesting species. The October field trip to Tablas de Daimiel and the Calatrava Steppes seemed to excel on all counts. Vicente’s useful diary of the birds he has seen in the area over the months, posted on the ABS forum, promised a great day out.
Many of us spent Friday evening in the historic and pleasant town of Almagro to be ready for an early morning start and, as the sun was rising, the convoy, led by our guides Vicente Malagon and Estefania, set off for Las Tablas de Daimiel to meet up with the rest of our group. Fifteen ABS members, including 5 for whom it was their first field meeting, stepped out into a beautifully sunny and clear morning, but a chilly 9 degrees saw us donning as many warm clothes as we had with us.
Las Tablas make a stunning impression. The Rivers Cigüela and Guadiana spread over 12 kms here creating wetlands with extensive beds of reeds, reed mace and great fen sedges. Wooden boardwalks give access across the water to some of the islets, with platforms giving uninterrupted views. The distant Toledo Mountains are the backdrop. As we set off the calls of the Cetti’s Warblers, Penduline Tits, Black Redstarts and Stonechats welcomed us from the Tamarisk trees, the only trees in Las Tablas due to their tolerance of salinity. Later Vicente showed us the beautifully crafted, hanging nest of the Penduline Tits, a nest which takes them 3 weeks to build. 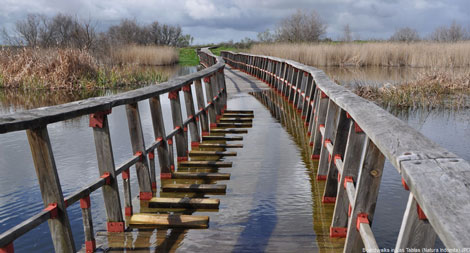 At the first viewing platform one of our new members, his attention attracted by the white fluff blowing from the reed mace, spotted a Penduline Tit pecking at the seeds. Unfortunately, due to the low sun, not everyone was able to spot the bird, but it gave us hope of sightings to come, misplaced as it turned out because, although we heard many Penduline Tits, sightings were tantalisingly fleeting. Two Bearded Tits flew overhead giving good, if brief, views.

Vicente explained that for thousands of years, the Río Cigüela, a seasonal stream of brackish water, and the fresh waters of the Río Guadiana flowed into Las Tablas forming an ecosystem only found on Earth in river deltas, but here, obviously, located in the middle of Spain, miles from the sea. There was no other place in the world like this unique habitat, and Las Tablas was recognised by scientists as one of the most important wetlands in the World. Unfortunately, since the sixties, changes in farming practice towards irrigating lands; the drying up of the rivers Guadiana and Cigüela; and the permissiveness of the authorities in allowing many thousands of illegal wells condemned this extraordinary ecosystem to extinction, with water levels dropping dramatically. Three years were crucial in this long history of Las Tablas: in 1984 the Río Guadiana, whose waters emerged from the surface as springs (called Ojos in Spanish), disappeared totally due to the low level of the aquifer; in 2009 a dramatic peat fire destroyed a vast part of the reeds and trees within the park; and in 2010, fortunately, the period of heavy rains was successful in retrieving the level of the water table, making 2010 to 2013 years of hope of enjoying the park as it was in past. Sadly this hope was lost again when pollutants caused harm in October 2013, destroying the rich algae that formerly colonized the surface waters, a harm very visible, from which the ecosystem is slowly recovering.
As we continued over the boardwalks a Great White Egret flew around several times, and many Cormorants sat on the dead trees hanging their feathers out to dry. Evidently Cormorants have only inhabited Las Tablas since the proliferation of reservoirs enticed them to inland Spain.

There was one Grey Heron, Little Grebes, Lesser Black-backed Gulls, Black-headed Gulls, Common Magpies, and 9 Marsh Harriers, some of many seen during the day. Vicente explained that, whilst it is common knowledge that immature male Marsh Harriers are brown, resembling the females, new research has shown that some adult males never have the grey/white plumage considered typical of males. The mystery of the apparent scarcity of males explained!

A Great Crested Grebe flew overhead – many remarking on this very unfamiliar sight. We heard the squeal of a Water Rail on several occasions without seeing one. There were a few Greater Flamingos, a lone Greenshank flew over calling, Cetti’s Warblers’ explosive call was heard throughout and other species recorded were Teal, Mallard, Zitting Cisticola, Robin, Blue Tit, Great Tit, Chiffchaff and several Willow Warblers, these latter apparently delaying their migration due to the unseasonably warm weather. And, yes, the temperature was now rising and the clothes were coming off. By mid-afternoon it was a very warm 30 degrees.
I was reluctant to leave this lovely and unusual setting but we were told there were lots of birds to be seen so we set off in convoy, leaving the park and driving alongside the Rio Guadiana. Three Common Cranes flew over. Lots of Crested Larks, a Corn Bunting, White Wagtails and Meadow Pipits were seen along this stretch. As we looked down on the Rio Guadiana, an Arabic name meaning River of Ducks, we saw no ducks (except Mallards). A large flock of Greylag Geese were grazing in a field and Vicente told us that just 12 individuals were released into the park in 2004, they prospered, and they are now resident.

Then the cry went up from Estefania “They’re behind you”. In a close-by field were 140 majestic Common Cranes! How lucky were we! The previous day only 37 Cranes had been recorded, their migration being delayed due to the warm weather but, fortunately for us, this large flock had flown in overnight. Two Black Redstarts, a Common Buzzard, and a Little Owl in a dead tree were noted. Moving on, we searched in vain for Bluethroats but only added to our list Linnets, Goldfinches, Cattle Egrets and 2 Barn Swallows.
Arriving  at Laguna Navaseca we  discovered where the Ducks were – hundreds of them:- 60-70 White-headed Ducks, 100 plus Shoveller, several Common Pochard, and a few Gadwall; also many Little Grebe and several couples of smart Black-necked Grebes. Seven Little Terns flitted around, a Green Sandpiper dashed past and a couple of Red Kites flew overhead. And then Vicente found us 2 Ferruginous Ducks, birds that are resident there and in other lagoons of the volcanic fields of Campo de Calatrava. Vicente explained that the Navaseca Lagoon is considered one of the best lagoons in Spain due to the high number (sometimes 50 – 60 pairs) of White-headed Ducks that breed every year, but also due to the number of rarities that can be found here (this year people have watched Great Bittern, White-Winged Tern, Marbled Duck, Temminck’s Stint and Marsh Sandpiper in the lagoon).
Moving round the Laguna to a muddy shoreline a Water Pipit flew beside us and a Common Snipe was spotted, very close but so difficult to see as it remained motionless. Two Wood Sandpipers and a Ruff on a mud spit close by made easier viewing, a Redshank flew past and a Little Egret landed in the reeds the other side.
It had been a great morning’s bird-watching but now lunch beckoned. After a pleasant lunch and a chance to chat, we set off refreshed and replete for an afternoon in the Calatrava Steppes, vast steppes encircled by the distant mountains. On the way, Vicente did a full circle at a round-about and we heard on the walkie-talkies that a large raptor had been spotted beside the motorway. And what a raptor! About 30 meters away in a flat field an adult Golden Eagle was devouring a rabbit, the magpies standing warily on either side looking tiny by comparison. A sighting to make any bird-watcher’s day! Thinking we should remove our cars from the road, we approached the bird on a track but it flew off and circled around close by, joined by another Golden Eagle, and mobbed incessantly by a Red-billed Chough. When we continued to the steppes a Golden Eagle sitting in a distant tree was ignored – we had seen the best! 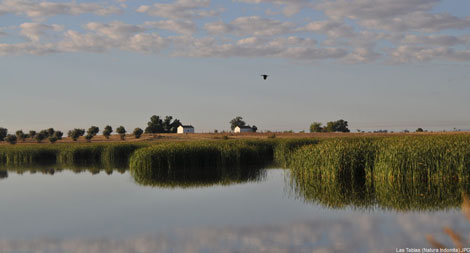 The road north-west into the steppes produced a flock of 60-70 Red-billed Choughs, 2 Hoopoes, Red-legged Partridges, an Iberian Grey Shrike, a Common Kestrel, a small flock of Lapwings, and a distant view of a female Little Bustard (how does Estefania spot these faraway birds?). Some members were fortunate to see a flock of Pin-tailed Sandgrouse but everyone was lucky enough to enjoy a male and female Hen Harrier quartering over the little stream bed.
It was now late afternoon, we had had a brilliant day and many a bird-watcher would have called it a day but Vicente and Estefania were determined to find us every species these steppes had to offer so we crossed to the south east side of the steppes. This was a striking landscape where the deep red soil contrasted with the bright green of the new crops and the dull green of the grasslands. With the strong sunlight on the surrounding hills, I wished I was a better photographer.
A flock of about 20 Calandra Larks displayed well, the slanting sun highlighting their white bodies and black under-wings. Estefania called several flocks of Pin-tailed Sandgrouse in the distance but they went to ground before most of us saw them, so we decided to move closer. And there in front of us, relatively close, were 70 Great Bustards and five Little Bustards. Could the day get any better! Well, yes, because then Estefania picked out for us 2 Black-bellied Sandgrouse, showing themselves well, their grey necks, orange throats and even the black line round their breast band clearly visible through the telescopes. Three more were added in the following minutes, while a Little Owl witnessed the scene from behind a pile of stones. There was a muted cheer, or was it just a collective sigh of relief that some of us would now stop chanting “we want Sandgrouse”!? And as though all this was not enough excitement for one day, as we turned the last corner to leave the steppes, just as the sun was setting, we had a great view of 24 Little Bustard, some of them even raising their wings to show off their white and black under-wing.
Well Vicente and Estefania had done us proud. We had seen 77 species. In a way they had saved the best for last, but for some the Golden Eagle at 30 paces, or the Penduline Tit may have been the best, and 140 Common Cranes are also a magical sight.
A thousand thanks are due to Vicente and Estefania for giving us such a wonderful birding experience, for sharing their local knowledge and expertise with us, to Estefania for spotting the virtually unspottable, for their determination that we should see every iconic species of the area, and for looking after us so well. I, for one, would love to return to this area.