It was a warm, bright summer morning  well it was somewhere in Spain, but certainly not at Tarifa where 17 hardy souls of the ABS discussed how many layers of winter clothing they were wearing.  The thermometer said 12c, but factor in the wind chill in Lidl’s car park and it felt more like -12c, it was out with the scarves and woollen hats too! The days leader, Frank Hair said we were  visiting the raptor watch point just on the outskirts of Tarifa itself. 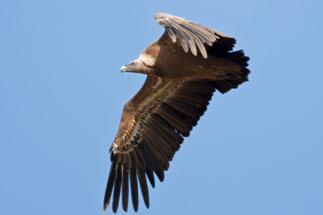 This, when the building is finished will certainly be both a better and safer place for migration observation.  Sadly with the prevailing wind and threat of rain in the air coupled with the still early hour meant no birds were arriving.  We contented ourselves with walking around [largely to keep warm!] and listening to 2 Nightingales trying to outdo each other; also a  Great Tit was attempting to drown them with his insistent calling.  Sardinian Warblers seemingly unaffected by the weather clung to the tops of low bushes perhaps pretending to be their Dartford cousins.  A couple of Barn Swallows, flew around as did both Common and Pallid Swifts.  Bee-eaters were heard up high passing through but eventually some were low enough for good viewing.  Cetti’s Warblers were calling from the thick scrub but most birds were sensible and staying down out of the easterly wind, although one member fleetingly glimpsed a Black-eared Wheatear.   After 45 minutes of zero raptors it was suggested we move elsewhere.  Barbara & I were fortunate enough to have been around here the day before and suffered the same problem but solved it by visiting a place we knew reasonably close by.  Nobody needed much persuading, so it was off in small convoy as the turning off of the N340 is tricky and not signposted.  En-route Collared Dove, House Sparrow, Blackbird, Spotless Starling & Cattle Egret were recorded.

Travelling towards Algeciras, turning off the N340 before reaching  the mirador/venta our five cars remained together.  On the verges just as we entered were quantities of Goldfinch & Linnet.  We took the road through the disused army camp and stopped at the junction just past the buildings.  A few Booted Eagles & several Black Kites were flying around the side of the hills close to a flock of sheep.  Blackcaps were singing in the low trees.  Checking that all drivers would be happy following the tarmac road down to the beach area, which then becomes a track ending at Guadalmesi  this was met with a ‘yes’ so off we set.   By the time we reached the bottom track we were rewarded with Booted Eagles seemingly skimming the tops of cars as they reached dry land.  Soon dozens of Black Kite were low flying almost as swallows, skimming the banks in front of us.  Cameras were clicking and ‘scopes and ‘bins put to full use.  After a time we moved along to the ‘hamlet’ of Guadalmesi to the watch tower and stone observation area.  Immediately a Little Owl was spotted on the eaves of a dilapidated  building on the ridge.  Soon the air was filled with Booted Eagles, Black Kites, numerous Barn Swallows plus a couple of Red-rumped.  Bee-eaters were now feeding low over the scrub.  Suddenly 5 Lesser Kestrel appeared plus a lone Sparrowhawk.  Stonechats seemed to be on every available perching position.  Corn Buntings were in full flow and both Greenfinches & Goldfinches were plenty.  Whilst looking out over the straits for more raptors, a couple of members also recorded Cormorant and Sandwich Tern.  Crested Larks were amusing us with their usual antics of attempting to emulate a Roadrunner! 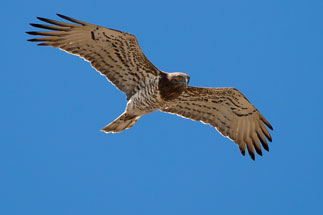 Everyone seemed much happier down in the relative warmth, although we experienced a few light showers.  However with time marching on it was suggested we drive back [it’s one way only] to our first stopping point as the quantity of arriving birds was building.  Driving back parallel to the sea on the track we just had to stop again as now several Short-toed Eagles were coming in off the sea and swooping very low over us.  Then it was Griffon Vultures, so low that you noticed their beaks open as if panting for breath!  Eventually returned to the ‘crossroad’ point to be amazed by 100+ Black Kite feeding on the hillside where the sheep were.  Setting off to explore, cameras & ‘bins to hand, to see just what was being devoured, we climbed the goat/sheep track.  Turns out it was May Bugs and the Kites were swooping down and plucking them from plants and the ground. Without landing they peeled and ate the bugs leaving the carapace to float down.  Rather like watching Lesser Kestrels or Hobbies.  Fascinating! 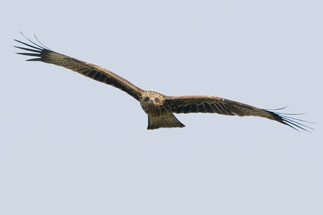 Studying the ‘clouds’ of raptors above us it was a mix of Eagles, Short-toed & Booted, Black Kites, Griffon Vultures and then the tell tale wedge tail of an Egyptian was apparent showing plenty of white underneath and low enough to admire it’s yellow beak.  Most members wanted to stay to continue this spectacle but lunch, the afternoon and certainly a cup of coffee called, so it was back to Lidl’s car park to collect the other cars and on to Apollo 11 for refreshment before La Janda in the afternoon.  Over coffee I did mention that we had spent the previous afternoon there and it was very, very disappointing.  A total lack of water in the canals and ditches and no rice or cotton yet planted left it barren, except for the raptors we had had on the far side of the farm.  It was suggested Barbate Marshes may be better as we had a good day there on the Friday.  So it was agreed by all for a change of plan and after a quick chat with JC [no, not that one but ‘our’ John Cantelo] we left in convoy. 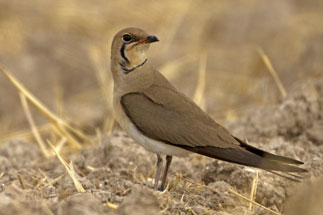 A couple of kilometres up the N340 sharp braking was required due to the lack of road sense of an Egyptian Mongoose who fortunately made it safely across.  All in the party managed to see it along with a couple of White Storks flying close by.  Reaching the marshes and turning off the road, it became immediately obvious that the Collared Pratincoles we had admired yesterday were still present in large numbers.  Some were landing on the mud banks and one even on the track in front of us, much to the delight of some members who had not viewed these delightful birds before.  Soon Pratincoles were filling ‘scope eyepieces and cameras were recording the action.  A lone Bald Ibis flew in to land on one of the concrete power cable supports by the farm and a couple of minutes later 4 more arrived to fly around in front of us.   Close by Kentish Plover were very visible and in the distance a dozen or so Greater Flamingo.  Barbara noticed a Short-toed Lark fly into to grass not far from where we stood and pleasingly everybody was afforded a good view of this lovely little bird.

Driving slowly on up the track with Corn Bunting and Woodchat Shrikes vying for the rusty posts -the former to sing, the latter to hunt – we stopped again at the first viewpoint.  Here Little Egret and a Grey Heron were in front of us and, just behind, Spoonbill.  An inquisitive Blue-headed Yellow Wagtail decided to view us from the top of a very close shrub, no more than 4 metres away and looking stunning in the afternoon sun.  Oh, did I mention that the temperature ’round the corner’ here on the Atlantic side was now 20c and coats were largely discarded.  Never fails to amaze me the difference a few kilometres makes around here.  Back to the birds, a solitary Dunlin and a few Mallard were found and one of the members casually mentioned seeing Stone Curlew here the previous week.  A search around soon found 2 wandering around amongst resting Collared Pratincoles.  Good ‘scope views for all.  Meanwhile on the military land behind us Calandra Lark were flying. 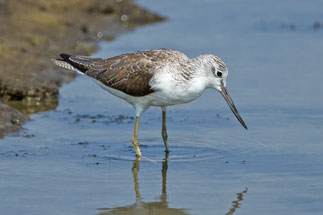 Continuing onwards we disturbed Hoopoe & Northern Wheatear, whilst Iberian Chiff-Chaff were flitting in the fenced areas.  Getting to where the track ends we became aware of an impending storm brewing ahead over Vejar de la Frontera.  A few members were fortunate enough to view a Common Redstart in the bushes and a Purple Heron was located out in the water margins – a little far out for the cameras, but perfect for the ‘scopes.  Skylark were singing behind us and the Calandra Lark were now close by.  Now very aware of the storm heading our way it was suggested to drive back and along to the tidal pools near the bridge before Barbate.  As we drove back down the track another (or the same) Purple Heron flew in to land close to the waters edge and very close to us.  Back at the watch point where the Stone Curlew had been sighted 30+ Sanderling in their smart summer plumage had arrived.

Reaching the main road, the forked lightening was now spearing down into Barbate in front of us and the sky as black as the ace of spades.  Nonplussed we drove down to the beach car park where the local fishermen were scampering back from the waters edge, grabbed our equipment and crossed the road with more care than the Mongoose had earlier.  Reward was a solitary Curlew, 2 Greenshank, Ringed Plover, a solitary Dunlin [in summer plumage] and surprise, surprise an Oystercatcher.  Then the big spots of rain started and the lightening now close enough to make me nervous of handling a tripod, so it was back to the car.  Frank was taking the group to the nearby nesting area of the Bald Ibis and into the storm, whereas we had seen it yesterday and decided the road to Malaga (with the added incentive of dinner and a beer) was a better alternative!

All in a different day than what was planned, but hey, go where the birds are.