When you arrive in Cabo de Gata you know you are somewhere else! Whether you arrive through the barren semi-desert with its distinctive, sculptured, hills or the miles of plastic greenhouses along the coast, this corner of Almeria is distinctly different from the rest of Andalucía. We arrived on Friday afternoon surrounded by black clouds reaching to the ground and others turned up with tales of flooding, some even of snow in the mountains, complaining that the only birds they had seen were soggy sparrows, squelchy starlings and p…..d off pigeons. Almeria city had experienced the worst flooding in memory with underpasses being flooded to within inches of the roof. Welcome to the semi-desert of Cabo de Gata!   However, Saturday dawned bright and when 17 members assembled at the hide at the northern end of the lagoons the visibility was good and by mid-morning the sun was warm and our spirits were high. The lagoons held good numbers of Avocets, Black-winged Stilts, Greater Flamingos and Black-tailed Godwits. Four Spoonbills and a Little Egret were seen in the distance and a single Mallard was the only duck. Kentish Plovers showed on the sandbank before the lagoon, Redshanks were seen and a single Curlew made a stylish appearance on a ridge silhouetted against the sky. Cormorants, Yellow Legged Gulls and a Kestrel were seen in the air. Several Yellow Wagtails flitted around the samphire in front of us, a Zitting Cisticola zitted in the field behind, and Barn Swallows and a Hoopoe were added to the list. 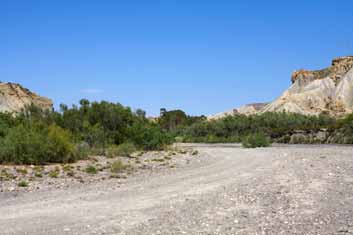 Leaving this hide the options were to drive south along the road to the lighthouse stopping at the 3 hides that overlook the lagoons (reached by tracks or paths crossing the sandy scrubland) or go first to the area behind the lighthouse in search of Trumpeter Finches, the target bird for some members as this area of Andalucía is the only area in Europe where this bird can be seen. Our group chose to go first to the rocky area behind the lighthouse. As we stepped out of the car we looked up at the wire to a singing Corn Bunting and, to our amazement and delight, a Trumpeter Finch was beside it on the wire, it’s red beak shining brightly in the sunshine and it pink breast showing well as the breeze ruffled its feathers. Wow! We had excellent views for a couple of minutes before it dropped down to a bare patch of ground below us joined by a second bird, still giving great views. We tried to keep track of them as they drifted away for 10-15 minutes until the rest of the party (alerted by a phone call) arrived. Unfortunately we had to admit to the rest of the group that we had lost them. However, this stony field, covered in flowers and occasional scrubby bushes held many interesting birds. Dartford Warblers made several brief appearances on the top of bushes, tails erect, before diving in. 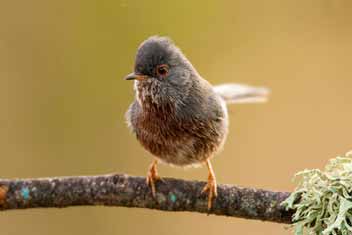 The sweet call of a Black-eared Wheatear alerted us to its presence on a wire behind us and this attractive bird showed well on the wires in front of us giving everyone good views and photo opportunities. We also watched several smart Black Redstarts, a single Black Wheatear, a few Chiffchaffs, 2 warblers with a white belly, which were identified as Iberian Chiffchaffs (this being the brief period when both species can be seen here – the Chiffchaffs not yet having flown North, and the Iberian Chiffchaffs just arriving).  We also saw Crested Larks, 2 Ravens, and Spotless Starlings, making their wide range of calls and prompting chat among members about how their local Spotless Starlings trick them by mimicking their mobile phones, and whether they should retaliate by changing their ringtones to trick the Starlings! Then there were murmurings of “I’ve got a bird with a pink wash” and “This bird has a red beak and red legs” – yes, the Trumpeter Finches were back and everyone was able to get good views through binoculars or in close up through the telescopes. What a result, the target bird seen by all before noon! For most of us this was a life-time first. We had genned up on the calls of the Trumpeter Finch, none of which is finch-like, and one of which is, unsurprisingly but curiously, like a trumpet. So as we left the site a vocal trumpet fanfare was given for the Trumpeter Finches! 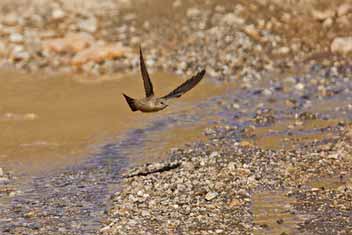 We then set off up the steep, winding road to the headland where we had superb views of the bays along the coast towards San Jose. More Black Wheatears were seen on the way up and one member saw a Rock Bunting and Stonechat. Crag Martins flew around at the top and I think everyone had a good view on the way down of a Peregrine Falcon which soared up the side of the cliff in the wind, flew over the cars to the top of the hill and was, surprisingly, successfully mobbed by a Kestrel. As we passed by where we had spent most of the morning 2 Trumpeter Finches were pecking among the stones at the side of the road!

Back along the coast road a Grey Heron was seen but no sea birds.

The most southerly hide overlooks 2 lagoons separated by a sandbank. The right-hand lagoon was favoured by dozens of Sandwich Terns, Lesser Black-backed Gulls, Black-headed Gulls, and Shelduck. The left-hand lagoon, with more islands and sandbanks, had Sanderling, Dunlin, Little Stint amongst other waders already seen. But the outstanding bird from this hide was a male Ruff coming into breeding plumage. It had a pure white head, a grey striated belly and a darker, striated back with the beginnings of a black ruff showing. It was simply stunning. For those of us who have spent years swearing about Ruffs for being large and small, light and dark, and thoroughly confusing, this was my time to say “I take it all back; this view of you wipes out all past complaints”. A Sardinian Warbler was seen and it was good to see a Skylark on a nearby post.

At the middle hide along the lagoons a Grey Plover was picked out in spite of trying to hide behind a sandbank and we had an excellent view of 5 Spoonbills which circled in front of us, climbing ever higher as if they intended to continue their journey north. 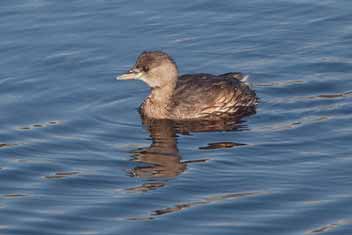 About 4 p.m. we drove through the village of Cabo de Gata, taking the track alongside the beach to the estuary of a stream blocked by a sandbank. Here we saw White-headed Ducks, Shoveller, Coot and Little Grebe. Barn Swallows, House Martins and Sand Martins flew close and low around us, challenging the photographers to capture their plumage gleaming in the bright sunlight. The Pallid Swifts flew slightly higher. Also gleaming in the sunlight were about 8 Yellow Wagtails (many of them of the Blue-headed sub-species). Other birds added to the list here were Meadow Pipit, White Wagtail, Linnet, Iberian Shrike, Cattle Egret, and a Stone Curlew (glimpsed in the distance). Another treat was watching a Skylark in full song climbing higher and higher in the sky. 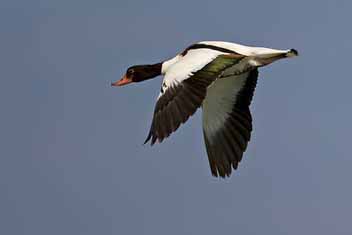 A Little Ringed Plover had replaced the Kentish Plover on the first sandbank, and a Greenshank was seen. Back at the southernmost hide the low sun brought all the birds into sharp relief. The Avocets, Shelduck, etc. look brilliant. A Turnstone was found amongst the Sandwich Terns and then a mystery bird, close by, keeping company with a Greenshank, and similar in colouring but noticeably smaller and more slender with a smaller eye, and a long, thin, bill, slightly upturned. Then suddenly someone turned the light out, the sun had sunk below the horizon, the chill hit us and we returned to the car. Later the penny dropped – Marsh Sandpiper – a great bird for the last of the day.

A big thank you to Bob for arranging a great weekend, and to everyone for their company – as someone said “good birds, good banter”.

The bird count was 65. As always it is quality that counts and Trumpeter Finch has to be top quality, as well as the good views of many special birds.

Bird list in order of appearance (more or less)