Even the name sounds exotic and conjures up visions of wild and exciting birds to be found and seen. Much more so than simply using the English translation and stating that we are off to the Odiel marshes! Coupled with the nearby Doñana National Park and its iconic “sandy” town of El Rocio barely an hour away, this has to be one of the most varied and best birding spots, not only in Andalucía, but in the whole of Spain if not Europe.  It was to this birding hotspot that the Andalucía Bird Society visited for its June field meeting under the expert eyes of enthusiastic local member and knowledgeable professional, Manu Mojarro.  This is a site that can be successfully visited at any time of the year but, undoubtedly, spring and autumn are best and a timing to arrive within a couple of hours either side of low tide will give the best results. Those attending were not to be disappointed even if we did arrive at the top of the tide, especially as most, if not all, combined the visit with at least a night’s stay in the area so that they could explore the neighbouring Doñana either before and/or after the visit. 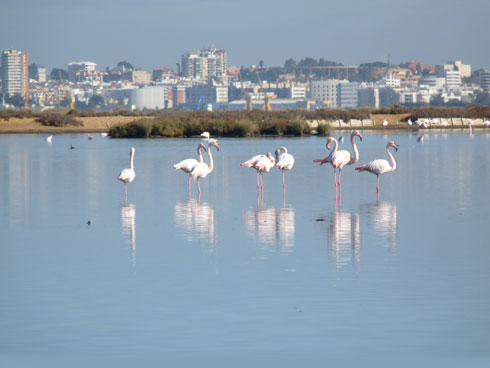 It was lovely to welcome some members attending their first field meeting with the Society and, eventually, twenty-five of us set off to visit the fresh water pool at the rear of the Visitors Centre and adjacent to the salt works.  The pool may have lost some of its water but it is still a most important part of the area drawing in not only a range of small, passing waders but also the local breeders. Usually, a number of Spoonbills come to drink and clean themselves from their nearby breeding grounds out on the islands which form part of the marismas.
The Marismas del Odiel are to the west of the provincial capital, Huelva, on a long spit that separates the Odiel river form the Atlantic Ocean culminating, after about 25 kilometres, at the distant lighthouse.  Travelling from the north you are greeted by the extensive salt lagoons and, depending upon the time of the year, these may either be full of shallow water, as they were on this occasion, or a mass of white with the constant digging and filling of huge lorries as the sun-dried salt, following evaporation, is transported back to base. Not so much a “pile of salt” more a mountain! It is in these salty waters that you will first see the hundreds of Greater Flamingos sweeping their heads back and forth as they scoop up large quantities of small invertebrates; a feeding frenzy that starts at first light and continues non-stop till darkness reigns once again. 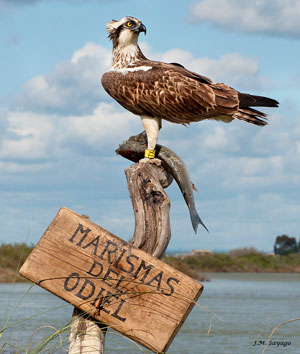 In some ways it is difficult to describe the site as a whole; I prefer to think of it in three separate sections. The northern end from the nearby motorway entrance and neighbouring salt workings stretch down as far as the high bridge almost opposite the confluence with the neighbouring Rio Tinto.  This is, given that there is a lower bridge near the Visitors centre, very much an island with typical marsh plants and the remains of much older salinas which fill and empty with the rising and falling tides. Here the visitor can look along the banks of the Odiel and its watery edges to find not only passing gulls, terns and Cormorants but a very wide range of waders.  The fresh water pool mentioned above had attracted about fifty Black-tailed Godwits whilst we were present, many in or approaching their fine breeding plumage. We managed to record Kentish Plover and Sanderling along with a quartet of Redshank whilst evidence of successful breeding was provided by both juvenile Red-crested Pochards and Great Crested Grebes. On previous visits this has been an ideal site to see Red-knobbed Coots and even the odd Purple Swamphen but success or not, very much depends upon water levels.
Birders will regularly be seen looking over the water from this first bridge or walking along the road to check out the neighbouring pools. There are a couple of hides but they always seem very little used as there is so much activity much nearer the road. Both the Odiel and Tinto are noted for the amount of heavy metal in the water being carried downstream from the hinterland but, as Manu informed those present, the planting of an imported esparto type grass from America has not only rapidly established itself but is an almost perfect solution for cleaning the water before it finally reaches the ocean. Could it be that these grasses were first brought back by Christopher Columbus who sailed from nearby Huelva on his discovery of the Americas with his three little ships, the Tinto, Nina and Santa Maria, along with his following expeditions?  Whatever, they certainly do a fantastic job as they wave about in the gentle breeze and have become, in themselves, an iconic feature of this beautiful and rare landscape.  The waters are awash with food so it is not surprising, therefore, that the whole area is a hotspot for both arriving and departing migrants as well as the resident birds and creates a whole food chain with small birds at the bottom and impressive raptors such as the breeding Osprey, Marsh, Hen and Montagu’s Harriers at the top not to mention the occasional overfly by the magnificent Spanish Imperial Eagle from the nearby Doñana National Park. Otters are in the area and we were able to find not only recent spraint but the remains of a recent meal in the form of a very large eel.
The second area along the spit is the island between the high bridge and the start of the long man-made spit to its final destination at the lighthouse itself. Here we have marsh on either side of the road with views over the Odiel and boardwalks that lead to the ocean beaches. From now on the whole area is very popular with the local anglers so attention is needed to avoid the many parked cars on the narrowing road, especially given that birders are particularly wont to stop at an instant to check out potential sightings! It is on the many small islands in this area that the large Spoonbill population breeds and on the main island, or nearby, there are presently four successful breeding pairs of Osprey. The nesting behaviour and flight of Ospreys can be closely seen from the nearby road.  In addition to the resident population, recent years have seen a successful re-introduction programme to increase the local stock and a good number of wintering Ospreys remain in the marshes rather than travel on down to the west coast of Africa. Checking the identification markings on some of these wintering Ospreys informs us that many of the Scottish population spend their winter months in the area. 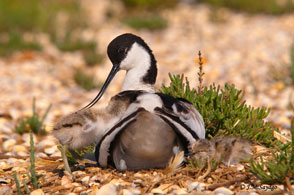 To me, this is one of the best places to find many of the resident and passing waders.  Indeed, by the time you set off for the third site on the spit you have probably seen just about every wader possible! Curlew and Whimbrel along with the various sandpipers and “shanks” will have been recorded, scores of Black-tailed Godwits and most of the small waders along with a Snipe, not to mention Stone Curlew, Avocets and Black-winged Stilts and then, of course, you can probably guarantee Grey Heron, Glossy Ibis together with Cattle, Little and Great White Egrets.  Our visit certainly provided many of these larger waders with most, if not all, of the group watching the large number of Curlews take flight but with still a few left behind on the far bank giving a good view along with their smaller relative, the Whimbrel. A superb opportunity to observe both species and compare the respective beak shapes and sizes. Depending upon the time of the year, Cormorants will be flying up and down the Odiel whilst above and around you will be a large selection of gulls and terns. Amongst the former Audouin’s Gulls whilst the latter included breeding Sandwich and Little Terns, while  flying above them  were Whiskered, Black and that larger-than-life Caspian Tern; the bird that Manu refers to as the “Snowman” due to its great white shape with a beak that looks like a large red carrot sticking out at the front!
The final site in my description is the narrow reef which has been created to take the road down to the lighthouse.  This in itself is almost half the total length of the spit but the road surface from now on is very “bumpy” but has to be traversed if one wants to reach the small sandy section on the Odiel side where the breeding Little Terns and Collared Pratincoles can be found and seen in good numbers.  It is also a favoured area for resting gulls and our visit was no exception with a large mixed flock of mainly Audouin’s along with Yellow-legged, a few Black-headed and the odd Lesser Black-backed Gull. Given that for much of this section the water is splashing up against the rocks on both sides of the road, you can still find numerous parked cars as the local anglers seek out their illusive prized catch of the day. 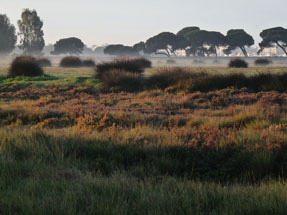 This area, along with other parts of the Odiel Marshes, is a favoured landing place for returning small migrants on their way north from Africa to their breeding sites.  A visit in early May found both Northern and Black-eared Wheatears on this distant part of the spit in addition to both Barn and Red-rumped Swallows.  Having found the gull roost, well over twenty kilometres from the start back at the Visitors Centre, the birder is probably better to turn round and make his or her way back, checking all the previous sites mentioned above as there is always something new to be seen in the fabulous Marismas del Odiel. I find that this site is one where driving a right-hand drive car has a great advantage in that you can simply pull over and you have the immediate view from the car window for both observation and photography.  In addition, it is probably at least two, if not three, hours since you set off and the water levels will have changed sufficiently to encourage more birds to take advantage of the site for your benefit and better enjoyment.
Returning to the Visitors centre to eat our picnic lunches before setting off for El Portil to find the resident chameleons, we were greeted by dark clouds and a short shower lasting a couple of minutes or so.  Rain in Spain in June; what’s happened to the weather? Despite the rain, we all had a marvellous visit. Many will have seen new species and will contemplate a return visit in the near future.
In conclusion, the Marismas del Odiel is a site that is well worth the effort to visit and birders will not be disappointed. The chances are that on a good day you will record well over fifty species and, if coupled with the neighbouring Doñana National Park, a two or three day visit would most probably result in your average birder reaching a final total of at least 100 species covering just about all the main families. Enjoy!