At first we thought the idea of a romantic early morning start to go birding up in the Montes de Málaga forest was a wonderful idea. Out and about, up with the lark. We even promoted the idea to others and encouraged them to embrace it. At a dark 5.10 am on Saturday morning, the novelty was a little more distant. However up and at ‘em, our birding bags were already packed and the car fuelled, so no excuses, shower – coffee – door. Saturday 23 August  2014, on the road by 6.00 am. 25ºC, a dark but clear sky, with a brisk wind and a crescent moon. The west bound traffic on the A7 coast road surprisingly busy for such an early hour. Passing the remaining late night revellers still enjoying the Feria – hence the traffic – and into the city of Málaga itself. Without the aid of a “Dum-Dum” to get us lost, we passed smartly through the twisty turny suburbs and out the other side. Then a 10 km drive up to the top of the mountain. No street lights here boys, mountain roads, tight curves with dark shadows and the city lights now far below.
7.05 am, still dark and running a little late, we made a tight left turn at the Fuente de la Reina natural water spring, and into the forest, with just 4.5 kilometres to go. Catching a startled Jabali (wild pig) crossing the road in the headlights just as we drove into a dark and empty Hotel Humania car park.
No Birders! Blast these guys are keen. Then a repeated psst – psst sound revealed our flock lurking in the shadows nearby. Without further ado, our leader for the day, professional birding guide and ABS committee member Luis Alberto Rodriguez led us twelve keen early birders on our merry way.
With the morning light filtering through the trees, the trail led us south east and into the woods. The object for today was different to usual, more of a listen and find – rather than a look and see field trip. Quite a birding class, “Rodders” is more than proficient at recognizing bird calls. 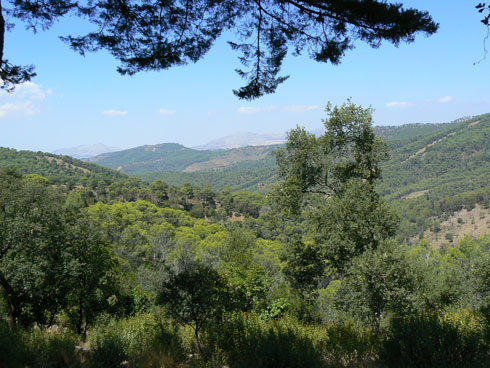 The woodland started to stir and stretch, coming awake shortly after 7.30 am with Blackbirds, Chaffinches, Common Crossbill and Robins all playing now you see me – now you don’t in the trees. Close by the sound of a Jay and Nightingales. In the sky, Turtle Doves, a Wood Pigeon and Kites. Black Kites first 8 then 13 more, grouping together high up, after a night in the forest, before migrating south west for African skies. Then the first big treat of the morning, a Short Toed Eagle putting on a real show by literally doing nothing. Effortlessly perched on nothing but the breeze for around maybe 15 to 20 minutes in plain sight. I was warming to this particular early morning woodland caper, it was proving to be most rewarding.
More light brought us more birds, Red-rumped Swallows ducking and diving, Common and Pallid Swifts flap flap and gliding, illusive Sardinian Warblers and maybe a Dartford. Greenfinch, Black Cap and Crested Tit. Then a Booted Eagle no less and a Common Kestrel for good measure.
Close to 8.30 am and back down to the Hotel car park to meet the others for the second 9.00 am rendezvous. Steve Powell spotting a Red Legged Partridge on the way. After standing around for some 40 minutes and a mental chorus or two of “why are we waiting” we were eventually on our way once again. Now twenty-four souls including Janet and Brenda, who coasted in with seconds to spare, having fallen foul of the Málaga side streets. Our illustrious guide once again explaining the ABC of forest birding and blessed with local knowledge, he lead us to a second woodland trail
Reported as far back as 1544 the constant deforestation over the centuries of the woodlands surrounding Málaga for agricultural ends, had caused excessive flooding in the area. Following the more recent decimation of the grapevine harvest by the devastating phylloxera parasitic insect at the end of the 19th century and abandonment of the vine terraces, the consequent and uncontrolled “run off” after heavy rains, once again led to more serious flooding in the city of Málaga.
The Montes de Málaga is a man-made forest created between 1930 and 1950 and covers some 50 square kilometres and acts as a preventative measure against this flooding. Originally planted with mainly fast growing Aleppo Pines and Cypress Trees. Cork and Holm Oaks, Poplar and Olive trees, Carob and others being added later to increase woodland diversity and support a greater variety of wildlife. The Montes de Málaga was officially declared a nature reserve in 1989.
Bad luck back then but good luck now for us, the mature forest is full of birds. The question is can you see them? The technique of looking through leaves so the leaves become almost invisible and using group listening to pin-point an area and then the bird, explained, demonstrated and put to good use. The group stayed tightly together and despite a few flat footers so quiet that Olly thought he might have gone deaf.
It was at this point Derek introduced a bit of birder magic. A small laser pen, a beam of green light, clearly visible at up to 50 meters away which he generously loaned to an impressed Luis Alberto. This handy tool is ideal for pointing out quite accurately, just which shadow in which particular bush a chirping bird maybe found. The majority of birds seem to roam the forest in groups of mixed species and so suddenly there were lots of birds. 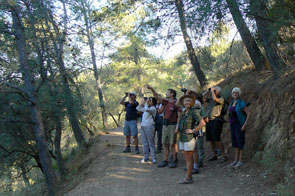 Short Toed Tree Creepers going up, Nuthatches coming down, Firecrests, Crested Tits, flocks of Long Tailed Tits, Coal Tits, Great Tits and Blue Tits. Common Crossbill, Goldfinch and  Greenfinch. Robins and the ever present Chaffinch or “ABC bird” as it is dismissively termed by some “Another Bloody Chaffinch”. Although since the introduction of the laser light technique, ABC may perhaps soon come to mean “Another Blind Chaffinch”. For me and probably the one eyed Chaffinches too, lasers are like Tom-Toms useful but not to be encouraged or depended on.
Blinded Chaffinches aside, our fresh and cool second forest walk terminated in a bright sunlight at El Mirador de Francisco Vázquez Sell. A mountain vantage point offering unprecedented views of both Málaga City and the surrounding mountains. On occasions complete with assorted Eagles, Honey Buzzards and other Raptors. Coffee and a snack for those who carried it with them and we retraced our steps back through the forest to the cars, for part three.
This was the end of the tarmac and the start of the dust, a couple of kilometres of track to Torrijos, the site of a small country museum which was closed. Never mind something for next time. Before leaving the cars the second big treat of the morning; a carefully sliced and deliciously moist home-made Banana and Walnut cake, in fact two cakes, generously provided by Ellie and Bob for all to share.
This was a much denser more unkempt forest area we entered now, in a small narrow valley previously used for wine production with evidence of long abandoned Lagers or storage houses. Despite its beauty, it was a death trap, a fact I found hard to ignore. The man-made forest has come under a lot of criticism for this and for me not without reason. But as Bruce Springsteen puts it “You can’t start a fire without a spark” so we soldiered on, but strictly no smoking.
This trail was far richer in bird life two weeks before when we accompanied Luis Alberto on his “recon”. This time not so much so, but nevertheless the woods still gave us Sardinian Warblers, Wrens, Spotted Flycatchers, a Bee-eater, two Greater Spotted Woodpeckers and Tuffty the woodland Squirrel.
The heat was by now really building up and starting to show in the bird count. We abandoned the idea of following a wider track and the promise of munching on juicy wild blackberries, for a cooler return through the woods along the narrower path we had just taken. Back to the cars leaving the berries for the birds.
After a vote of appreciation for the three excellent woodland tours and the in-depth guiding provided by Luis Alberto, the group dissolved around 1.30 pm. Some back to the Hotel Humania for lunch, others probably to their homes or just out into the wide blue yonder somewhere. For ourselves we chose to pop open two deck chairs and enjoy a picnic lunch and a cold beer (alcohol free of course). A couple of happy birders on a quiet Saturday afternoon, deep in a rather special woodland in Southern Spain.
Montes de Málaga, nice one “Rodders”.

For more photographs of the day and other ABS field trips throughout Andalucia lookout for face book page Andalucia The campo and The coast. (www.facebook/andaluciathecampoandthecoast).