Any ABS field trip is always preceded by a degree of excitement, checking the weather, planning the packed lunch and wondering which particular fashion statement, using multiple shades of green, to make this month. Starting out from Mijas just as the night-time street lights were turning off, the clock on the dashboard said 7.45 am and the temperature a cool 7ºc, no wind and no rain, so far so good.
Today was a day out in the Province of Cádiz with Frank Hair, Birding for Big Boys and Girls, promising a high probability of Griffon Vultures, a possibility of Bonelli’s Eagles, a certainty of sparrows and all the other little feathered fellahs too. Crossing the Rio Guadalhorce by Málaga Airport at 8.07, the frost warning light came on, showing a cooler 4ºc and the first birds of the day appeared. Flocks of Rock Doves, plenty of Gulls and two common Egrets out on the breakfast run, a mid-air altercation between some more gulls and what looked like a Kestrel and a cracking view from a road bridge down on to a Mallard in a graceful curved glide that followed the river. So far, more than good.
Leaving the Guadalhorce wetland behind, the road starts the climb out into the Campo proper, always a stunning sight, especially in the early morning light. Driving with one eye on the road and speedometer, the other taking in the sights, long abandoned farmhouses, big three legged ENL generator windmills and a ruined fortified look-out tower from a bygone era. Eventually, despite the confusing  mismatched road map numbers, the winding road reached the Olvera turn-off. Passing through the town and down a steep valley where often nobody goes, except today it looked like a practice run for St Patrick’s Day, green jackets everywhere with a splash of white and orange for good measure.
After a quick hello, coffee and head count, at 10.00 am sharp, field guide for the day Frank, led us off on the first leg of a motor-tour of the lesser known potholes of Andalucía. Seven cars, twenty five birders which magically increased to nine cars and twenty eight birders or perhaps more by the time we reached the farmhouse in Muela and the start of our Via Verde Andalucía nature walk.
This Vía Verde is a disused railway line passing over several similarly disused viaducts one of which provides an unobstructed view of one of the largest Griffon Vulture colonies in Spain, the Peñón de Zaframagón. This huge outcrop of rock, just under 600 metres tall, is located in a nature reserve of the same name and blessed by a plentiful food supply of small animals and foxes, thermal up-draughts, easy access and scores of Griffon Vultures.

The Sunday excursion so far had produced a fair showing of other birds; in Olvera, House Sparrows, two Ravens, Spotless Starlings and a Common Cormorant. On the road to Muela, Common Kestrel, Linnet and Sparrow Hawk. Either side of the track to Vulture Viaduct, female Stonechat, Sardinian Warblers, Crested Larks, Collard Doves, busy little White Wagtails, Black Redstarts, Blue Rock Thrush, Crag Martins and returning ABS member Claus from Denmark spotted the two illusive Bonelli’s Eagles and of course the big unmissable Griffon Vultures, too many to count.
After a while on the viaduct and several aborted attempts to re-asses our own head count it was decided to say adiós to the gliding Griffons and move on up to see Franks friends at the nature reserve reception centre and the birds in the picnic area.
There were more birds to be seen – despite our constant chit-chat and the chirping of passing Sunday Cyclists, who seem happy to spend a grand plus on a bicycle but reluctant to give the local Halfords just two and sixpence for a warning bell, however there was room enough and friendly greetings from both sides, the cyclists and the ABS birders, who in all fairness will persist in standing in the middle of any path or road, oblivious to all and sundry, whilst peering through rubber coated tubes at the back and beyond. Crested Larks, House Martins, both Blue and Long Tailed Tits, Goldfinch, the ever present Black Bird, on the way back  a “cloud” of Natterjack Toad Tadpoles in a puddle and a lovely Bee Orchid under a bush.
After a rest up and a sandwich, Frank lead us back across the puddles and  potholes to Estación de Olvera, where some disappeared, some choose to head off to one of the many local Ventas for their lunch, the rest opting for a spring walk in the sunshine along the nearby Guadalporcún river. 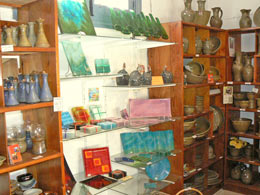 The fast flowing small river was a very pretty site but not so hot on the bird count; nevertheless, Chaffinches Chiffchaffs, noisy Blackcaps having an outrageous tree party, Green Sandpiper, Serins, Meadow Pipits, Finches, Cettis and other Warblers. The presence of lots of little yellow Celandine flowers throughout the surrounding meadow confirming that spring surely was not far away.
After an hour walk-about Frank arrived and invited those left to re-join the group at the nearby Artesania del Prado Pottery and Glass Studio. Time was running short but the pottery proved to be worth the extra effort, delightful bespoke craft work by  owners Liz and Jenny and a Green Woodpecker hiding in a tree.
Five twenty-five, the light was starting to fade, all in all another excellent day out and for us, time for home.