For the March field meeting the Society travelled to its furthermost site to the east, visiting the beautiful area of Cabo de Gata in Almeria province.  Even the weather was perfect for the week-end with early morning mist giving way to clear blue skies and, for many, definitely a case of shirt sleeves.  Considering how many members live well to the west of Malaga, this was a very well- attended meeting with a final count of thirty members.  Indeed, all but one stayed overnight on the Friday with twenty-three residing in the local Hotel Brisablanca not two hundred metres from the visit’s meeting point.

But the thought of thirty birders trying to scramble into the small hides overlooking the Salinas, nevermind the number of cars tackling the busy coastal and the very narrow road leading to the lighthouse, certainly led to a very drastic re-think.  How best to both see the birds in reasonable comfort yet not get in each others’ way and so miss much of the action?  Something different was called for. So, prior to setting off, I prepared a sketch map (Figure 1) illustrating the area and the various sites and included a list of suggestions that might be of help.  With just about everybody in the same room for breakfast, and many pre-warned of what was going to happen, I had chance to outline my plan for no car convoy but, rather, a series of small groups all visiting different points on the map at different times with the possibility that we would all meet up at different times during the day and the probability that individual groups would come across each other at various points and times.  Did it work?  Participants will, no doubt, have their own views of the success and, hopefully, it may be something that the Society can build on for future field visits if, as seems likely, we can expect over thirty members at each meet. 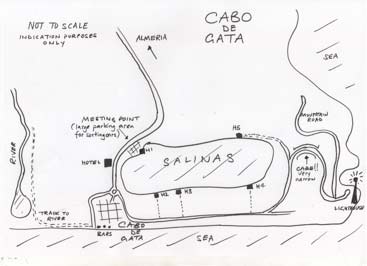 And what of the birds themselves?  As individuals I suspect that we each recorded somewhere in the region of fifty plus species.  However, as a group, the final total was 86 species.  Had we all stayed together I imagine that, as a group, we might have recorded about sixty but some would have missed many and all but a few in the cramped conditions.  It was, as the leader, very encouraging to hear from members the birds that they had recorded whilst observing in small numbers.  Each group seemed to have seen something that another did not.  One group with extremely close views of Water Rail, another with a Great Bustard flying by and almost taking the hide with it whilst another had Trumpeter Finch and yet another a couple of Caspian Terns.  Other terns included a pair of Sandwich Terns and numerous Gull-billed Terns resting on a spit in the eastern salina.  Even a feeding Gannet was observed out to sea.  It was amongst the Gull-billed Terns that both Mediterranean and Audouin’s Gulls were seen.  Everywhere I looked members were telling me about their various experiences and the excitement of seeing something special.  It really was a joy to be part of the overall experience.  A more detailed analysis is considered at the end along with potential pros and cons. 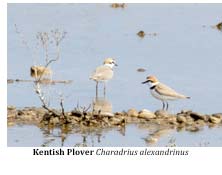 Having advised what might be seen and where, including the report that a Great Bustard had been recorded in the immediate area the previous Tuesday, members split up into a number of share cars and set off for the carious hides.  With every hide and the river visited we were all soon in amongst the birds, even if the overall impression was that there were fewer birds in total on the salinas than we had expected.  Caspian Terns were found at the lagoon to the west of Cabo de Gata whilst the first visitor to take the mountain road actually found the only pair of Trumpeter Finches to be seen during the whole day.

For me, hearing that one of the groups had actually started out at the first hide from the village (Hide 2 on map) and been rewarded with an extremely close view of Water Rail was most refreshing.  For our two cars, total of seven members, a start at the back of the Salinas (Hide 5) proved somewhat disappointing after the long drive along the track.  Shelduck, Black-winged Stilts, a couple of Redshanks and a single Little Stint along with many frisky Kentish Plover, undoubtedly the most numerous wader over the week-end, could all be found at the more accessible hides on the sea side of the Salinas.  O the other hand, we did see numerous Crested Larks, Corn Bunting and a pair of Sardinian Warblers.

Meanwhile, Common Redstarts and a Dartford Warbler were also found at the start of the mountain road and, whilst many if not most of us were at this point, we had very good views of a gorgeous Black-eared Wheatear which seemed to have taken up residence for the duration.  Further along and up this no-through road most also recorded many Thekla Larks, Black Wheatears and Blue Rock Thrush.  Again, starting from this road and working down to get a view over the beach and rocky outcrops another group managed to find the only Shag of the day.  Needless to say, there were numerous Cormorants resting on the salinas.

The Salinas themselves, as usual, were full of Flamingos totalling, perhaps, in the region of a couple of hundred.  In addition there were hundreds of Avocets present so all members had very good views of these delightful waders.  Little Egrets could be seen on most waters and both a Grey Heron and Great White Egret were also recorded.  As previously mentioned, the most numerous wader was the Kentish plover but we did also find both Ringed and Lesser Ringed Plover along with the odd Dunlin, Grey and Golden plover.  Sanderlings were seen, as well as a score or more of Black-tailed Godwits.  The actual morning had started at Hide 1 with those present being able to see a few Stone Curlews accompanied by a handful of Eurasian Curlews when looking at the rough area to the right.  Even a Green Sandpiper was recorded but, left till almost the end of the day when members returned to Hide 1, either by accident or advice, they had the opportunity to observe single Redshank, Greenshank and Spotted Redshank feeding immediately in front along with a single Black-winged Stilt as the birds seemed to wander in and out of the legs of the feeding Flamingo. 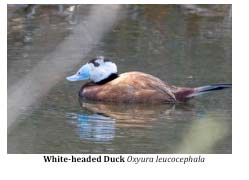 Very few ducks to be seen initially, just a few Mallards and a number of Shelduck.  But come the visit to the lagoon and Rambla Morales we were certainly presented with ducks.  A few Teal and Common Pochard plus a pair of Shoveler but numerous White-headed Duck.  Also present, in addition to the odd Moorhen and numerous Coots, were a couple of Little Grebe and some most splendid Black-necked Grebes.

Above the water the air was alive with feeding Barn Swallows and we did see the odd Red-rumped Swallow and a number of House Martins.  The grassy slopes behind and along the rambla produced numerous Crested Larks, a few Corn Buntings and even a late Sky Lark.  Unfortunately, we were not to get a second sight of the Great Spotted Cuckoo seen the previous afternoon on our way to the hotel.   Smaller birds included Serin, Greenfinch and Goldfinch. 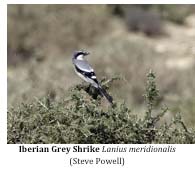 Raptors seemed very scarce with only a single large raptor recorded as a Marsh Harrier drifted in from the sea and over the Salinas.  Meanwhile, we did have sightings of a few Common Kestrels and a Peregrine Falcon seemed to be present most of the day judging by the number that observed this raptor.  But we did have Southern Grey Shrike and a late-in-the-day Woodchat Shrike.

Having recorded our eighty-six species, my lasting memory is of speaking to one member who had gone off with his wife in the one car and told me how every time he stopped at a hide he either met another party or was joined by other members and they all excitedly swapped tales of what they had seen and where they were going next.  Perfect!

But my final tale must be of the illusive Great Bustard that had been seen earlier in the week.  Nobody expected to see this huge creature; surely it was an accidental stop-over on its migration from somewhere to somewhere?  Yet I suddenly had a call that the bird had travelled low past Hide 2, landed and displayed before wandering off into the thick scrub, where we normally look for Stone Curlew, at the far end in the direction of Cabo de Gata village.Rushing to the hide along with many others we searched in vain for a sighting of the bird.

Eventually, we even travelled up to the far fence in the hope that nearer meant more chance of a sighting.  It was not to be so I set off for the lagoon and rambla.  Returning at the end of the day to say farewell as I had to get back home the same evening, I heard that our members travelling in one car had walked the fence and the Great Bustard had risen in flight before quickly re-settling.  They, too, had seen this magnificent bird.  So, as a last resort, I drove down the track and walked to the end of the fence for one last look myself, even though we had already telephone to say we had started out on our return journey.  Still no sign of the bird so I took a general shot of the area centred on the small, broken concrete post, I don’t know why – I never do things like that, and we carried on home.  Imagine my surprise and delight when I happened to look at the day’s photos with a view to deleting the “rubbish” when I enlarged this general shot and discovered that the concrete post was not – it was the Great Bustard.  Wow and thrice wow!  Is this what they call kismet?  Certainly a great way to end the day and give you something special to dream about.