Flamingos by the thousand
Mick Smith, Ellie Wallbank and I travelled to Laguna Fuente de Piedra Nature Reserve on Saturday to meet up with fellow members of the Andalucia Bird Society for a Field Trip and for our annual Financial General Meeting.  The plan was to meet at 09:00, do some birding and then assemble at the visitor’s centre at 12:00 for the Society’s Annual Ordinary General Assembly. 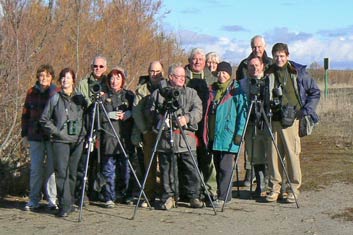 The weather forecast, like last year, was not too good.  Also the previous evening had delivered a severe rain storm on the coast and the combination of forecast and storm resulted in there being less members than expected to meet us. Actually the weather at Fuente de Piedra was OK.  There were huge dark grey clouds, but there was also blue sky and sunshine and most importantly there was neither rain nor a strong wind.
The lagunas were fairly full of water, which meant that those nice muddy shores were all covered by water.  Consequently, we did not see many waders only Black-winged Stilts that have long legs and Common Snipes that prefer more secluded places than soft muddy edges.  We did however see a lot of ducks.  There were around one hundred Eurasian Teal, which was a welcome sight.  There was also many Northern Shoveler and Mallard and a few Gadwall.  Also, on the smaller lagunas we saw many Eurasian Coots, a few Moorhen, many Black-headed Gulls, all of which were still displaying non-breeding plumage.  There was also single Black-necked Grebe feeding in the laguna and a single Little Egret feeding at the edge of a laguna.  Flying above Laguna del Lagueneto was a number of Crag Martins.
In the marshland and fields surrounding the small lagunas we found many species.  There were many Meadow Pipits flying around and also many Corn Bunting, all in fine voice.  A small flock of European Goldfinch, calling loudly, flew past and a large flock of birds swirled around, which we eventually identified as Reed Bunting.  A female Common Kestrel was found perching on the side of a brick tower and in the field behind the tower were several Cattle Egret busy feeding.  On an electricity cable above the field were perched a small flock of Spotless Starling and a flock of noisy Jackdaws flew past.  A few Crested Larks were seen feeding on the ground and noisy House Sparrows were busy among the bamboo near the boardwalk.  Nearby, we heard a Cetti’s Warbler calling, but we could not see it.  White Wagtails were flying about calling and were also seen feeding at the edge of the lagunas.  Several female Black Redstarts were seen standing looking around, while bobbing their bodies up and down.  Pairs of Stonechat were also seen taking their sentinel positions on upright stalks and twigs, hunting together.  A beautiful Hoopoe perched in a tree for us, looking around with its crest raised before flying off.  Also, there were Common Chiffchaff everywhere – I think there was one in every bush. 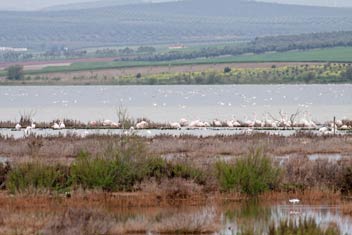 On the main laguna there were huge numbers of Greater Flamingo both in front of the Visitor’s Centre and also at the southern end of the laguna.  In total there was in excess of two thousand birds.  Also, on the main laguna, in front of the Visitor’s Centre were large numbers of Lesser Black-backed Gulls, and sizeable groups of Lapwings and Avocets.
After the Annual Ordinary General Assembly some members went for lunch and some continued bird watching.  Those that continued bird watching decided to visit Laguna Dulce. The group split up to drive around the main laguna so that both sides of the laguna reserve could be monitored.  This journey revealed Raven, Black-winged Kite, Common Buzzard, Stone Curlew and several hundred Common Cranes.  In addition we saw a lot more Spotless Starlings.
At Laguna Dulce we began to feel a strong cold wind blowing from a northerly direction that was getting uncomfortable.  The water level of the laguna was very high and the wind was causing the surface to be quite rough.  Consequently, there were not many species to be seen on the laguna.
The most impressive sight was about 2,000 Eurasian Coot floating and diving.  The wind was blowing them into crescent shapes across the surface.  Occasionally, a Black-headed Gull attacked an individual Coot.  The reason remained a mystery to us.  There was a large flock of Black-headed Gulls also floating on the laguna.  Between these two large flocks the only other species that had ventured out on the laguna were Little Grebes and a couple of Black-necked Grebes.
In the sky above the laguna were about 100 Crag Martins diving and twisting in their attempts to catch their prey. They were quite impressive.  Among them we found two early Sand Martins.  Also flying over the laguna was an occasional Lesser Black-backed Gull.
Flying down the eastern side of the laguna, above the reeds we saw three separate female Marsh Harriers.  One of the Harriers decided to fly across the laguna in front of the hide providing us with excellent views.  When it was past the hide it was attacked by those dreaded Black-headed Gulls and was forced to land on a narrow spit of land.  It stayed there until the gulls lost interest and then flew on.
At the more sheltered western edge of the laguna was where we found the ducks.  There were about 40 Mallard and three pair of Gadwall.  Among the reeds close to the hide there were lots of Common Chiffchaffs feeding.  Also, in the fields at the back of the laguna were a number of Common Cranes.
While we were watching birds in the hide someone noticed that we had a rodent visitor – a small mouse or vole was walking around the floor, quite undeterred by our presence, munching on picnic crumbs.  It soon had more crumbs than it could possibly manage.
Eventually, the cold wind defeated us, so we left our small rodent friend to enjoy its feast and departed for the warmth and comfort of our homes.
Birds seen on the day
Shown in systematic order.
Gadwall, Mallard, Northern Shoveler, Eurasian Teal, Little Grebe, Black-necked Grebe, Greater Flamingo, Cattle Egret, Little Egret, Black-winged Kite, Western Marsh Harrier, Common Buzzard, Common Kestrel, Moorhen, Eurasian Coot, Common Crane, Stone Curlew, Black-winged Stilt, Avocet, Lapwing, Common Snipe, Black-headed Gull, Lesser Black-backed Gull, Hoopoe, Jackdaw, Raven, Crested Lark, Sand Martin, Eurasian Crag Martin, Cetti’s Warbler, Common Chiffchaff, Spotless Starling, Black Redstart, Stonechat, House Sparrow, White Wagtail, Meadow Pipit, European Goldfinch, Corn Bunting, Reed Bunting.
40 species.
David Hird
Chairman of Andalucia Bird Society