A startling thirty nine members attended this Field Meeting, which is the largest number of attendees that we have ever had.  In fact I still remember the days when we would have being thrilled with thirty nine members.
The group was so large that we decided to split it into two groups.  Nineteen went with Frank Hair as their leader and twenty one with Bob Wright.  Frank started at the Cazalla Observatory above Tarifa, then went to the hide overlooking Los Lances beach just to the west of Tarifa and then onto La Janda.  Bob did the reverse.
The weather was warm with a temperature of about 24C, but when we started at 09:30 there was about a 70% cloud cover and a wind that was blowing from the east at 24kph with gusts reaching 32kph.  The cloud cover reduced during the morning but the mist in the Straits that was obscurring the coast of Morocco remained.
The Frank team headed to Cazalla Bird Observatory above Tarifa arriving at about 10:00am.  We parked our cars and remained on the Migres side for the whole of the morning.  Unfortunately, the weather was not suitable for raptors or storks to attempt to cross to Africa but there were birds flying along the coast, usually into the wind.  Cazalla was very exposed and the wooden shelter provided very little shelter from the wind.  Telescopes had to be constantly held in case they were blown over and if they were used to view birds at a distance they were almost useless due to the wind moving them about. 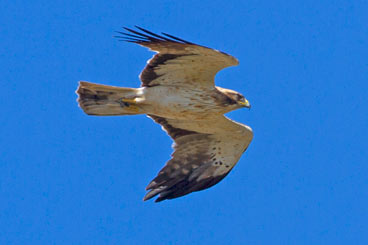 The Booted Eagle was the most numerous species.  We saw about thirty birds, all were light phased birds and most were adults.  Fortunately, lots of them came quite close as they battled with the wind through the valley below us.  This enabled new members of the Society to learn quickly how to identify them and they were soon shouting “Booteds” to point them out to the rest of us.
Other species that we saw in largish numbers were Black Kites and Griffon Vultures, and we saw about twenty birds of each species.  We also saw Egyptian Vultures and were able to see adult, sub-adult and juvenile birds.  Again we saw about twenty birds.
In between watching raptors Pallid Swift (3), Barn Swallow (6), Red-rumped Swallows (12) and Spotless Starlings (30ish) flew past like jet rockets.  Blinked and you had missed them.  There were also two adult Ravens playing in the wind.  Actually, watching the larger birds flying into the wind you had the impression that most of them were enjoying themselves.  There were only a few who landed and gave up their struggle.
Other raptors we saw were sparrowhawks and strangely these were all male birds.  We also had magnificent views of Short-toed Eagles showing their white underparts as they banked in the wind.  Honey Buzzards were also present in small numbers.  We also had an unidentified large falcon, which we suspect was an Eleonora’s but were far from certain due to us only seeing it briefly.
Three Black Storks made an appearance from the direction of La Janda in the west.  Before they got to us they turned round and flew back to La Janda.
At about 13:00 we decided that we were not going to see anymore new species and headed to the hide at Los Lances beach.  This entailed driving towards Algeciras for about 3km to the Mirador del Estrecho to turn round as the A7 was too busy cross Cazalla and it is also illegal.
We parked our cars at the Service Station beyond Tarifa and carried our equipment and lunch across the road and down the kilometre track to the hide.  We arrived at the hide at about 13:30 and fortunately it did provide some shelter from the  wind, which was just as strong at sea level as it was in the mountains above Tarifa.  This enabled everyone to enjoy their picnic lunch while observing the birds and the many wind surfers beyond.
The hide overlooked a large shallow pool that was created by the río Jara trying to flow to the sea but, as the tide was out, its progress had been halted by a sandbank. 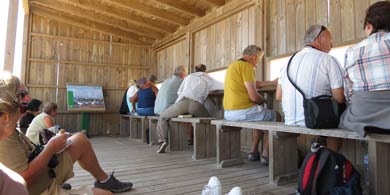 At the far side of the pool was about a hundred gulls.  Most of them were Yellow-legged Gulls, but there were a small number of Lesser Black-backed Gulls and to one side were seven adult Audouin Gulls.  In front of the gulls were four adult Sandwich Terns in winter plumage.  Feeding in the pool was a juvenile, light grey, Greater Flamingo, an adult Grey Heron and eight Black-tailed Godwits in winter plumage, although a couple still had a tinge of the orange plumage of the summer in their feathers.  Feeding in the river flowing into the pool were two Little Egrets.  Running along the back edge of the pool were a gang of Sanderling.  Most were in their very light grey winter plumage but several were still in their brown summer plumage.  Between the hide and the pool there was a single Kentish Plover, also in winter plumage and to its right was about twenty, feeding Ringed Plovers.  Among the Ringed Plovers was a single Dunlin that showed a plumage in between its summer and winter attire.  On the left side of the pool were two Oystercatchers, both in winter plumage.  Feeding among the short, dry grass behind the hide were several Yellow Wagtails of the sub species flavissima, which is the bird from Britain.  Walking back to the cars we spotted Stonechat, House Sparrow and Cattle Egret among some horses.
At about 14:30 we set off for La Janda and used the entrance opposite the Zahara de la Atunes road junction on the A7 to enter.  The plan was to follow the track down to the main drainage channel and follow the track westwards along the drainage channel until we could turn south and follow the track back to the A7.  When we all gathered on the entrance track we were dismayed to find that the wind felt stronger in La Janda than it had at Tarifa.  The strong wind did affect the birding as most of the birds were sheltering on the ground, usually out of sight.  However, we were welcomed by an adult female Marsh Harrier flying low overhead and three Black Storks flying across the wind, which could have been the same birds we saw earlier.  On our way down to the main drainage channel we also spotted a Serin and a few Crested Lark on the ground. 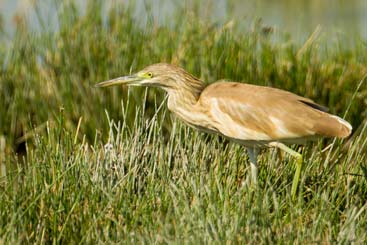 Sheltering on the far side of the main drainage channel we quickly found a Squacco Heron crouching among the dried vegetation.  In the distance on other side of the channel we estimated that there were about fifty White Storks standing in the fields.  During our time in La Janda we saw about two hundred White Stork feeding in the rice fields and ditches.
Driving slowly, with many stops, along the main drainage channel, continually being buffeted by the wind, we also saw in the rice fields hundreds of Cattle Egrets feeding together in large groups, some of which were still showing breeding plumages.  There were also about fifty Little Egret, but they were either feeding alone or in small groups.  Individual Grey Heron were also spotted, totalling eleven birds.
Barn Swallows were one of the very few species we saw flying and there were several hundred of them flying about in small groups.  Other species seen flying in large numbers were Spotless Starling, about fifty birds, and Wood Pigeon in a flock of about eighty birds.  Harriers, which were mainly Marsh Harriers, were seen hunting by flying low over the rice fields.  Their mastery of the conditions was impressive.  Some were able to remain in the same place looking down into the rice whilst facing into the strong wind.  We saw quite a few females, a lesser number of juvenile birds a beautiful male bird.  In addition we watched a female Montagu’s Harrier in the distance.
We had hoped to see Purple Swamphen in the reeds growing on the bank of the main canal, but it had recently been dredged and the reeds were flattened by dredged material that had been deposited on the bank sides.  The portable watering machinery was also constantly scanned for perched Black-winged Kites but they were not to be seen.  However, we did sees a soilitary male Common Kestrel perched on one of the metal electricity pylons beside the track and three Jackdaws revelling in the strong wind.
At this stage La Janda was proving to be disappointing but then we arrived at the corner at the far end of the track, close to the bridge, and where it turns back towards the A7.  On this corner was a large sunken rice field at it was full of sheltering and feeding birds and we spent some time checking them out.  Many of the birds were close to the track so could be viewed with ease.  There were about twenty Collared Pratincoles standing at the edge of the field and some were even on the track beside the field.  There were juvenile birds among them. 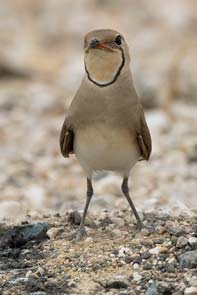 There were several Green Sandpipers, and even more Wood Sandpipers.  In the centre of a large open area stood two adult Eurasian Spoonbills.  Black-winged Stilts were there in large numbers, and Common Snipe were everywhere.  Bob Wright’s group found a Jack Snipe among them but despite intensive searching we unfortunately could not find it.  Ruff were also feeding in large numbers and there were about a thousand Glossy Ibis feeding among the rice.  They were easily spooked by the Marsh Harriers gliding above the rice, which caused a black cloud as hundreds of birds arose into the air at once.  There were also Shoveler and Garganey feeding.  The male Garganey birds were in eclipse and were difficult to tell apart from the females.  Also there were several Common Coot, one Moorhen and four Yellow Wagtails, again of the sub species flavissima, feeding.
While we were searching the rice field for ever more species a Short-toed Eagle flew close behind us, as did two Black Kite but more distanct and directly overhead flew a sub-adult Egyptian Vulture.  We were also entertained by several Zitting Cisticola flying, or more accurately being blown about by the wind and a Cetti’s Warbler singing from some reeds behind us.
Bob’s group crossed the bridge, along the avenue of trees, up the hill to the farm and down the other side to the drovers track.  Here they turned round round and made their way back.  This extra journey rewarded them with Red-legged Partridge, Common Pheasant, Turtle Dove, Sparrowhawk, Lesser Kestrels, Booted Eagle, Blue-headed Wagtail, Rock Doves, Collared Doves, Common Buzzards and Sardinian Warblers.
For Frank’s group the time was now about 17:30 and people began to say goodbye as they started their journies home or sort a nice soft bed in a nearby hotel.  On our way out of La Janda we saw Greenfinch, Goldfinch and Stonechat.  We also saw an Osprey that flew ahead of us from metal pylon to metal pylon as we slowly drove down the track.  Then we realised it had caught a fish and was trying to eat its supper.  We therefore left it in peace looking forward to our supper after a long and rewarding day.