Time to let you have a more detailed account of the Society’s visit to the Guadalhorce, Malaga on Saturday 24 August, which was attended by 18 members.  No doubt the list of birds seen (see end of report) will need to be amended when individuals inform me of the bird(s) I may have omitted from the list!

As indicated above, seventeen of us set off from the rear of the primary school to cross the footbridge into the reserve where we met up with member Eric Lyon.  Having reached the Sea Watch, the majority reversed their steps and then took in the Laguna Escondida on its way to the main hide at the Laguna Grande.  Meanwhile, those few that took the beach walk ended up at either/both of the above where we were able to compare notes on what had been seen during the morning.  As might be expected, each group managed to identify a few different birds not seen by the other but, I think, most if not all of the group, would have recorded a minimum fifty species.  Indeed, some had arrived even earlier than the posted start time and Luis was able to record over a dozen Glossy Ibis heading up river from the reserve. 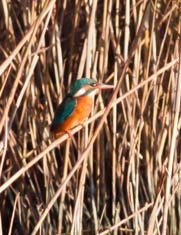 Starting out there was a good number of swifts to be seen feeding overhead, mainly Common but also a number of Pallid Swifts.  Likewise, plenty of Barn Swallows about plus a handful of Red-rumped Swallows and a few House Martins.  Naturally, we were greeted by a raucous flock of Monk Parakeets.  From the footbridge we were able to see Coots and Moorhens plus the off Little Egret along with the resident flock of Rock Doves and a scattering of Spotless Starlings.  Up river to the right of the first bridge a Kingfisher rested for very many minutes showing off his salmon-coloured breast.  From here and regularly throughout the morning we had views of Zitting Cisticolas and even produced a couple of Sardinian Warblers.

The first hide overlooking the Laguna Casillas produced a few Coots and Little Grebe plus a White-headed Duck and single male Common Pochard.  However, pride of lace must have gone to the Little Bittern that kept us entertained from the top of the opposite reed bed.  The first Little Egret was seen and more were to follow during the course of the morning.  Around us we had a movement of Serins, Goldfinches and House Sparrows plus a single Greenfinch.  From the neighbouring hide overlooking the Wader Pool the first sight of waders.  A few Black-winged Stilts and about twenty Little Ringed Plovers along with a Kentish Plover. 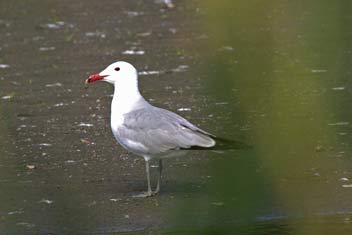 A pair of Green Sandpipers was feeding to the left whilst a Common Sandpiper did likewise from the centre island.  Then, there in the old tree at the front of the nearest island, another Kingfisher to entertain us as he fished away to his heart’s content.

The expose old river, Rio Viejo, certainly contained a mass of gulls.  To the right mainly Yellow-legged with a sprinkling of Lesser Black-backed but the, towards the centre on the far side the Audouin’s Gulls.  Meanwhile, on the near shore, the smaller gulls made up mainly of Mediterranean but a few Black-headed Gulls.  Also, to the right , another Kentish Plover and a couple of Little Ringed Plovers but also a single Little Stint and a pair of Dunlin.  About a dozen Black-winged Stilts worked the area and a couple of Turnstone were identified working the nearside edge of the water.  Walking towards the old river from the Wader Pool we had a single Sedge Warbler resting on the side of the track which gave a good view to many whilst, in the vegetation below, the first Cetti’s Warblers of the morning were heard. 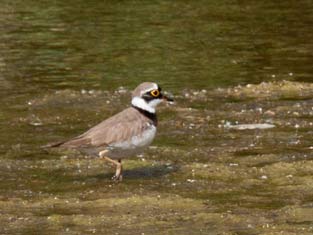 Very little to be seen at sea or on the beach so the group split to make their separate ways to the remaining two lagunas. Those travelling via the beach managed to record both Nightingale and Olivaceous Warbler and at the Laguna Grande found a juvenile Redshank.  Meanwhile, the other group had a surprise visit from a close Booted Eagle at the Laguna Casillas and a few Grey Herons had arrived at the Wader Pool.  Also at the latter, the visiting Snipe reappeared and remained well-concealed but, in the end, all were able to find the bird.  Finally, leaving the pool, a large flock of Barn Swallows were taking a well-earned rest in the shade.

The small Laguna Escondida duly provided a handful of White-headed Ducks along with a pair of Gadwall and Shoveler plus a family of maturing Mallards.  Little Grebes were busy diving and there were also a few Coots present.  So on to the main hide at the Laguna Grande.  Lots of gulls present representing all five species previously seen.  A couple of Sandwich Terns passed through but then three Little Terns arrived and remained long enough for all to watch their fishing expertise.  Closer study revealed that a single juvenile Greater Flamingo was feeding amongst the gulls and then a couple of juvenile Cattle Egrets arrived on the scene immediately in front of the hide.  Members of the first group to arrive were able to report the presence of a Grey Wagtail in front of the hide and then a small flock of Blue-headed Wagtails (Yellow Wagtails of the Iberian sub-race) flew in from behind the hide.  Meanwhile, at the back of the water, five Avocet drifted from left to right followed by three Black-necked Grebes moving in the opposite direction. 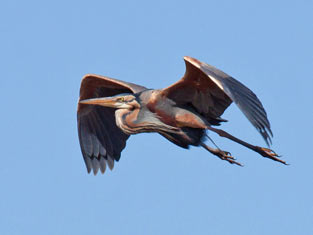 To add variety, the single Grey Plover, still mainly in summer plumage, remained long enough on the far bank for most of the second group to get a quick view before the bird moved away.

Two more birds remained.  Having seen only the one raptor all morning a lone Kestrel appeared in the distance behind the hide and settle in the top of a Eucalyptus tree and, on leaving the hide to make our way back to the cars, a single Purple Heron flew over us towards the Laguna Grande.