Twenty-four members met at the Venta La Vegas on the junction of the MA-505 to Montejaque and the A372 Ronda to Sevilla road in the province of Málaga.  The weather was lovely, with a clear blue sky, plenty of sunshine and hardly a breath of wind.  Everyone was quickly organised into seven of the most suitable cars and we left the venta on the MA-505 heading towards Montejaque. 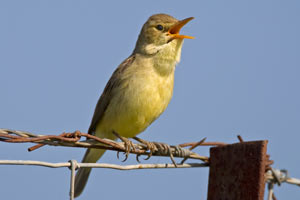 The group travelled for about 2.5 kilometres before stopping at the entrance to a birding site called El Pantanillo but we did not enter.  This birding site can be found in the Birding Information section of the website under Bird Sites, Málaga.  About fifteen minutes was spent overlooking arable farmland and oak woodland and during this time we recorded several Melodious Warblers, a male Blackbird, Wood Pigeon flying past and Red-rump Swallow feeding and calling in the sky above us.  Above the swallows there was a small group of Pallid Swift also feeding.  The three star species at this early stage of the meeting were Golden Oriole when three birds flew out from the El Pantanillo site, two Cirl Bunting, and a Great-spotted Woodpecker climbing up a dead branch of a tree.  As the majority of woodpeckers do it was climbing on the opposite side and only peeked out occasionally so it was difficult to give this bird a gender.
We moved along the MA-505 for another two kilometres until we came to the area where the Embalse Montejaque is located, and here we stopped.  The road passes through a gorge with crags on both sides of the road and we managed to park all seven cars on the grass verge.  We had tall cliffs behind us and we were looking down into a rocky valley populated with small bushes, scrub and rocky outcrops.  Beyond this were more cliffs and tall mountains beyond them. 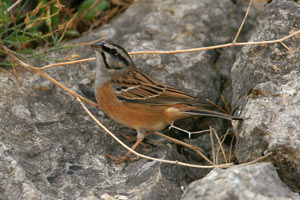 In this habitat we found quite a few species of birds.  There were several Rock Sparrows flying about and also several Melodious Warblers, Western Bonelli’s Warblers and Sardinian Warblers feeding in the scrub and bushes.  We had the pleasure of watching two Melodious Warbler parent birds with two juvenile birds feeding in the same bush.  There were also quite a few juvenile Sardinian Warbler feeding in this area.  Black Redstart and Rock Bunting were also present as well as Greenfinch, Serin, Chaffinch and Goldfinch.  A single Blue Tit was heard and then spotted feeding in a small bush a couple of Iberian Chiffchaff were also seen.
Three genuine Rock Doves flew together through the craggy valley below us and we also saw three Alpine Swifts also fly together through this valley.  Crag Martin were flying around the valley feeding.  On the cliffs opposite we found separately a male and a female Blue Rock Thrush.  Both were perched on a rock suitably positioned for looking around. Overhead we heard several Bee-Eaters fly past and we saw several Griffon Vultures glide majestically overhead. 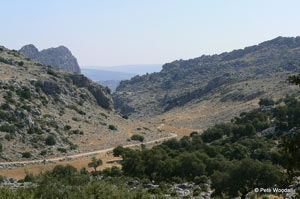 There was not only birds to fascinate us, we also saw two adult Spanish Ibex (Capra pyrenaica) with two juveniles expertly climbing up the side of the cliffs in the valley.  In addition three adult Ibex crossed a solid cliff face angled at seventy degrees, which looked impossible.  These animals have perfect balance and are so nimble footed.
In the valley below us, to our right, there was a large pile of rocks and Peter Jones explained that was a result of a large landslide in the 1800s, which buried a farmstead that was located on the floor of a the valley.
As we moved further along the MA-505 towards Montejaque we passed another crag where we counted six more Griffon Vultures perched and saw numerous others gliding above us.
Peter led us into the village of Montejaque and found his way to the road that took us up into the Libar Valley.   Montejaque is located at about 680 metres above sea level and the drive up the Libar Valley would take us close to 1,000 metres above sea level.  As we travelled through Montejaque we saw Common Swift flying among the rooftops and Several Collared Dove as we were leaving the village on the Libar Valley track.
After travelling a distance of about 750 metres from Montejaque we stopped to look at a Bonelli’s Eagles nest that was used this year to raise youngsters.  The nest was located on a mountainside on the edge of a gorge facing west.  We stayed at this location for about fifteen minutes, parked in the shade of the steep mountain behind us.  A welcome relief from the hot sun. 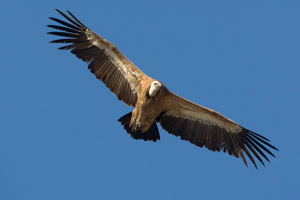 From our shaded position we watched about thirty Griffon Vultures glide overhead and among them was a Black Vulture.  Peter explained that their are at least eight birds in the area.  Seven birds were ringed as nestlings in Huelva and these are now all adult birds that have found their own way into this area.  There is at least one other without a ring.  It is assumed that they must now be breeding here, but given the extent of woodland in the area no-one knows where.  Also, above the mountains, about twenty Alpine Swifts were seen flying in a dense group.  As they twisted and turned the sun flashed off their white breasts and bellies and they looked like a shoal of fish flashing in the sea.  Several Crag Martins were also flying above us and a Raven was found gliding, high above the mountains.
A Eurasian Sparrowhawk flashed past very quickly.  It looked like a male bird.  House Sparrows and Goldfinch were flying around and a male Great Tit was found feeding in the shrubs growing among the rocks above and behind us.
As we moved on up the valley we found several Woodchat Shrike, both male and female, usually perched in the top of a bush looking around for their next meal.  Black Wheatears perched on rocks were also fairly common as well as male and female Stonechats perched at the very top of a plant stalk or small Tamarisk bush also looking for their next meal.
There were also Lesser Kestrels on the rocks above us and Peter told us that he thought there were at least three pair nesting in the rocks above us.  Other common species were Linnet and Black Redstart. 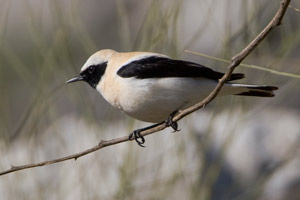 As we drove higher we started to see Spectacled Warbler, Black-eared Wheatears and Thekla Lark.  At one point we stopped and watched Thekla Lark mobbing a Little Owl.  Every time the Little Owl settled on a rock to survey the area it was attacked by an adult Thekla Lark.  As we moved up the valley we saw more Little Owl.  Also, Common Kestrel made a presence when we saw a female flying above us, calling.  At the same time we also saw four adult Chough fly from behind a mountain and overhead, calling as they went.  We also came across a colony of Rock Sparrows that were were nesting on a rock face.
Eventually we came to a portion of the track that had large trees located at its edge or close by.  Here we found Orphean Warbler feeding in the trees.  They were difficult to see as the foliage of the trees was very dense and the birds took a long time working their way through each tree so did not fly between trees very often.  Here we also saw three Hoopoe perched in a tree together and watched a small flock of Spotless Starlings fly overhead.
We drove on seeing more Little Owl, Woodchat Shrike, Thekla Lark, Black Redstart, Black Wheatear and Goldfinch.  The track started to descend towards a farmstead located in a valley plateau.  Here we found lots of Barn Swallow and House Martin and in dehesa woodland beyond the farm we heard and then located a Nuthatch in one of the trees.  Beside the track there were a large number of Spanish Marbled White butterflies (Melanagia ines) feeding on an unidentified plant. 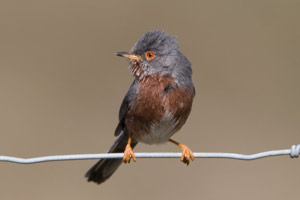 As time was getting short we decided to turn round and return.  The Libar valley is about fourteen kilometres long and at this stage we had completed about nine kilometres of it.  On our journey down we saw three new species.  The first was two adult Short-toed Eagles gliding high across the valley.  While we were watching these birds we also found an adult female Wheatear  We also stopped to watch a family of Black-eared Wheater; the parent birds were feeding the juvenile birds.  In the same area we located a Dartford Warbler.
We returned to the Venta La Vegas to collect all the cars and then drove to Finca Alqueria for the AGM followed by a barbecue.  It was here that we saw the last species of the day; a light-phased Booted Eagle.  It flew over in the middle of the AGM, which was immediately put on hold until everyone had their share of looking at the Booted Eagle.
After all, we are a Birding Society.
53 birds seen
Griffon Vulture, Black Vulture, Short-toed Snake Eagle, Eurasian Sparrowhawk, Booted Eagle, Lesser Kestrel, Common Kestrel, Rock Dove, Wood Pigeon, Collared Dove, Little Owl, Alpine Swift, Common Swift, Pallid Swift, European Bee-Eater, Hoopoe, Great Spotted Woodpecker, Woodchat Shrike, Chough, Raven, Great Tit, Blue Tit, Thekla Lark, Swallow, Eurasian Crag Martin, House Martin, Red-rumped Swallow, Iberian Chiffchaff, Western Bonelli’s Warbler, Melodious Warbler, Eurasian Blackcap, Western Orphean Warbler, Dartford Warbler, Spectacled Warbler, Sardinian Warbler, Nuthatch, Spotless Starling, Blackbird, Black Redstart, Stonechat, Wheatear, Black-eared Wheatear, Black Wheatear, Blue Rock-thrush, House Sparrow, Rock Sparrow, Chaffinch, Serin, Greenfinch, Goldfinch, Linnet, Cirl Bunting, Rock Bunting.
David Hird
Chairman of Andalucia Bird Society