A superb birding site
The May field trip was to the Parque Nacional de Las Tablas de Daimiel, which is located just beyond the border of the province of Andalucia near the city of Cuidad Real, in the province of Castilla-la Mancha. The reserve lies on the La Mancha plain, where the rivers Guadiana and Ciguela merge, over a huge aquifer which itself lies very close to the surface. The result is an inland wetland of clear, sparking lagoons and reedbeds which are a magnet for birdlife in the dry plains of central Spain. 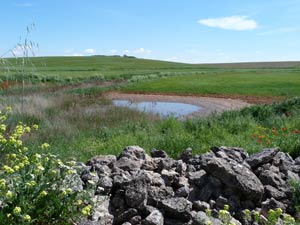 The day started with a visit to a nearby lake which is outside the reserve; the Laguna Navaseca. Here the water treatment plant from the town feeds into the lagoon, maintaining the water levels and the organic content of the water, which supports a large population of water birds. The clear, sunny day was perfect, with the spring wildflowers being a riot of colour everywhere.
The water level was high with lots of reedbeds to attract the birds. First glance showed a healthy population of Greater Flamingos, then we quickly began the list with; Pochard, Mallard, Eurasian Coot, Black-winged Stilt, and Lesser Black-backed Gull. The White-headed Ducks and Red-crested Pochards were both showing their bill colours nicely, and there were lots of Black-necked Grebes displaying bright orange ‘ears’. Some of the many Black-headed Gulls were nesting on clumps of rush.
A little more effort was required to find; Great Crested Grebe, Moorhen, Grey Heron, Northern Shoveler, Gadwall, Little Egret, Common Sandpiper, Common Shelduck, Redshank, and Ruff. The summer presence of Greylag Geese was explained by Vicente; the local population of  Greylags stem from 12 injured birds which, on recovery, were released in 1984. Apparently many of their descendants do not migrate North but remain in the area to breed.
We saw Whiskered Terns snatching bugs from the surface of the water in characteristic fashion, and a solitary Purple Swamphen was spotted by the edge of the reeds, at the very back of the lagoon.  A Purple Heron flew overhead and we identified three Black Terns flashing around the lagoon, clearly showing black heads and bellies.
The Great Reed Warblers were very vocal, and quite easy to spot for once as they sang from the reed stems. A shout of ‘new species here,’ turned out to be a very interesting bird; a hybrid Western Reef Egret with Little Egret. The bird was a uniform slate grey with white chin, seen paddling around in the water weeds to disturb the frogs. 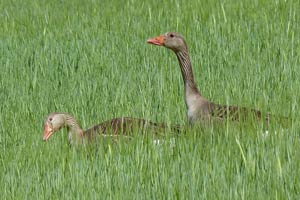 In the fields and trees around the lagoon we spotted Common Magpie, Collared Dove, a solitary Black Kite, White Wagtail, Spotless Starling, Red-legged Partridge, Swallow, and Common Swift.  And Peter Jones managed to see a Whinchat.
Back in the cars, we drove along a causeway at the edge of the lagoon and saw Eurasian Spoonbill, Black- tailed Godwit, Collared Pratincole and Gull-billed Tern; just one or two of each. Then groups of both Ringed Plover and Little Ringed Plover. Then, one of the day’s highlights; we flushed a pair of Little Bitterns which settled down again quickly, but out of sight.
Next stop was by a ruined water mill on the Rio Guadiaro, surrounded by masses of wildflowers. From the bridge over the river, which was then in full flow, we could see a series of shallow ponds in the nearby field. Vicente told us that these are called ‘Ojos’ (eyes) and are along an older course of the river which was diverted when the area was partly drained for agriculture. The Ojos appear when the underground aquifer is full and oozes up to the surface. Which brings us to one of the biggest problems facing the reserve.
The water in the aquifer is extracted for agriculture, both legally and illegally, by farmers sinking wells. At the moment, with the rains of this winter, there is plenty of water and the ecosystems are very healthy. Two years ago, after fairly dry winters, the reserve was in dire straights; it was so dry that the peat subsoil was on fire, underground, in places. The Guadiana in the area was dry and had been for some years. During these periods, the illegal wells damage the fragile ecosystem enormously. Of course, the balance between wildlife and the environment, with peoples’ livelihoods, is never easily maintained. Now, we can only imagine the site as it was; teeming with ducks and wildfowl, when it was a crown hunting preserve, and before intensive agriculture. 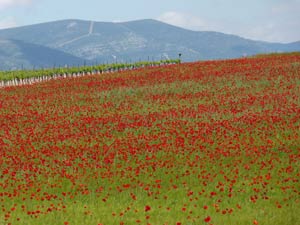 Happily, the river reappeared in November 2012 as the aquifer refilled, and the birds and wildlife have returned. Around the river and ponds we found, a White Stork, two Night-herons, Crested Larks, and Estefania caught sight of another Purple Heron before it disappeared into the reeds. Red-rumped Swallows swooped overhead, and both Common Kestrel and a Hoopoe flew over. By that time, the day was heating up, and Estefania produced some very welcome tapas which we ate serenaded by the many Corn Buntings nearby.
Then we drove through immaculatly tended vinyards for the local Valdepenas wines, and wheatfields blushed with scarlet poppies, to the actual reserve itself. En route along the river, we found a Great Egret and two more Little Bitterns. We parked at the visitor centre which is on the main lagoon where the two rivers meet. From the centre, there are three boardwalk routes into the reserve; sadly we only had time to explore one, but Vicente still managed to find us most of the target species.
The ducks and waders are not so visible here, as there is dense reed cover and also, the water being less nutrient rich than Navaseca, there is less food for them. Rarities such as the White-headed Duck are actually easier to see in Navaseca. There are, however, lots of warblers and other passerines. First bird here was a Stonechat, the first of many, then Zitting Cisticola, Green Woodpecker, and Goldfinch. A single Golden Oriole flew over as we moved on to the boardwalks. The second of the day’s highlights came next, when Vicente pointed out the Penduline Tits at their beautiful, hanging domed nest in a tree overhanging the lagoon.
Walking along, the birdsong was delightful though the target warblers were rather ellusive. But we managed to spot Greenfinch, Blackbird, Cattle Egret, Cetti’s Warbler, Yellow Wagtail, and Great Tit. Then a fine male Great Crested Grebe close to the walkway, gave us all a photo opportunity. Interestingly the boardwalks themselves had to be raised up with additional boards because of the high water levels, though the lagoons themselves are quite shallow and very clear because of the underlying peat. Here the Reed Warblers held sway over their Great cousins and we were able to see quite a few singing in the reeds. 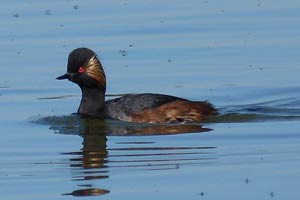 Arriving at the Isla del Pan, Vicente found us the Tree Sparrows which breed on the island, near to a restored reed cutters’ shelter. These chaps aren’t usually on our trip lists, so it was nice to have good views of them. Crowning a raised hill, is a look-out post, from where we could see the extent of the wetland and one of Vicente other favourite birding areas; the Parque Nacional de Cabaneros. From the hill, we saw a Marsh Harrier in the distance, over the edges of the reserve. Moving back through the ancient woodland on the island we saw a fat Wood Pigeon and had great views of a singing Nightingale and Great Reed Warbler.
Back onto the boardwalks, a Marbled Duck flew over as we reached a hide. From here a Squacco Heron was seen fleetingly and more Reed Warblers. Further on we could see another island which held a colony of resting Cattle Egrets, and a pair of Eurasian Spoonbills at their nest in a low tree. On the same busy island were few Glossy Ibis and Great Cormorants.
Out in the reeds again, a hush fell over the group when Peter Jones heard a Moustached Warbler. Holding our breaths, we managed to find it as it flitted up and down in the stands of reed. We followed it until we finally got a good view as it landed and swayed on a stem. Sadly it moved off quickly but our next treat was a Savi’s Warbler, again seen popping up out of the reeds, then dropping back down almost immediately. With these aquatic warblers, you have to be quick off the mark with your bins!
Somewhere in all this, Peter also notched-up a Garden Warbler, but it didn’t linger long enough for general viewing. Also, we missed seeing the Bearded Reedlings which are present in the reserve, because by that time lunch was well overdue, so we made our way back to the cars. In the grounds of Restaurante La Duquesa we tried, to find Spanish Sparrows amongst the House Sparrows, but we failed. After a very welcome lunch, most of the group left for the journey home; four of us remained, and continued adding to the list.
En route to the Dehesa Zacatena on the north side of the reserve, we crossed the river where a pair of White Storks were nesting. While I watched, the male brought a large frog for the sitting female, accompanied by much bill clapping. Nearby we stopped to watch a pair of Greylag Geese with their two chicks emerge from a sea of wheat into the open. Alarmingly, one of a pair of Common Magpies began to stalk the family and the chicks, which were hurrying to get to the safety of the nearby lagoon. We watched horrified as the corvid dared to get closer and closer, until he made a grab for the last chick. Somehow it managed to wriggle away as one of the adults came to its rescue. Then they were all in the water and safety. 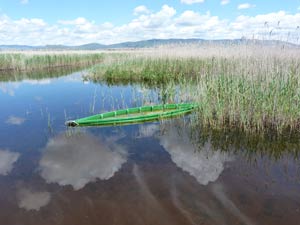