Well what a day, as I arrived at the meeting place at Adbades service area, which is the higher service area and it is on the A92 motorway heading towards Granada, the skies either side of the sierra looked very black but the space over the hills were clear.  As the time got nearer and the members of the Andalucia Bird Society started to arrive the sky took a turn for the worst and by the time we set 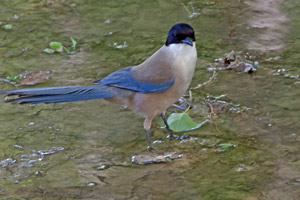 off the drizzle had started, we had seen several Iberian Azure-winged Magpies, House Sparrow and Spotless Starling, before we left.  By the time we reached the disused quarry just above the town of Loja the heavens had opened but a few of us did get to see one of the adult Eagle Owl sitting on the entrance to the nest platform.  Some of the group used umbrellas to protect their scopes and to stay dry, I will deny it if anybody tells Peter or Pieter that I used one and I will hunt down any person who mentions that it had Pink and Purple hearts on it (it was Jayne’s honest).

Anyway, some of the brave members wandered into the quarry and quickly picked up a Black Wheatear, Chough and Rock Bunting.  On the bank a single Sardinian Warbler and Dartford Warbler were heard, while both Swallow and House Martin fed low over the bank and Common Swift flew over much higher. 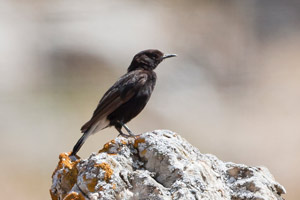 On the track back down from the quarry we saw Pyramidal Orchid Anacamptis pyramidalis, Pink Mediterranean Catchfly Silene colorata, Mediterranean Kidney Vetch Anthyllis vulneraria, Cerastium boissieri, Dianthus Pungens, Hare’s-tail Grass Lagurus ovatus and Omphalodes commutata.  Once on the main track we started to head up the sierra but the cloud soon proved that it would be a complete waste of time, so we decided to make our way out to Moreleda to have a look at some near by agricultural land.

On the way we picked up European Bee-eater, Crested Lark, Hoopoe, Blackbird, Stonechat, Collared Dove, Common Magpie, Jackdaw, Serin, Goldfinch and Greenfinch.  Out on the fields Corn Buntings were heard along with Crested and Calandra Larks.  Once through the almond plantation the first bird was a cracking male Little Bustard, which did a splendid fly past in front of us all.  By the time we reached the ruin on the site the rain was again lashing down on the temperature had dropped considerably.  Other species seen and heard here included Quail, Little Owl, Wheatear and Short-toed Lark but there was no sign of the Black-bellied Sandgrouse. 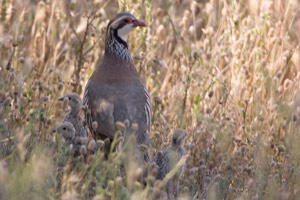 We then decided that the weather had done for us, so a retreat for lunch in Huetor Tajar was the next stop.  The rain continued but after lunch we decided to have a second attempt on the mountains, we dropped Bob off at his car as he has a serious affliction, being a Chelsea fan and as they were playing at some point during the afternoon he had to leave early to get home for the TV. The rest of us set off and called at a small disused quarry where we picked up Red-rumped Swallow, Wood Pigeon and a nice singing male Cirl Bunting.  Further along the track a couple of Rock Sparrows were feeding below the Pine trees, Woodchat Shrike was seen well in a sapling and a Great Tit called loudly.  Firecrest and Short-toed Treecreeper were heard in the pines.  We then returned to the quarry and the Eagle Owl was this time seen briefly by most of the group as it flew around for a moment after being harassed by a Common Kestrel.  A male Blue Rock-thrush flew down the slope and a Stonechat perched up giving good views.  We then headed up on to the higher areas of the sierra picking up several Black-eared Wheatears, more Chough, Jackdaw, Thekla Lark, Little Owl and Hoopoe.  There were a few clumps of the Upland Peony Paeonia coriacea in flower along with Viola dementria, Navelwort Umbilicus rupestrs and Southern Wild Tulip Tulipa sylvestris ssp australis.  The rear two cars managed to see a male Rock-thrush through the mist. 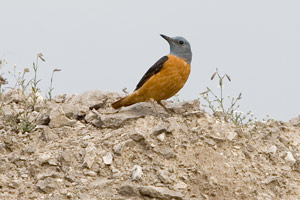 At Charca del Negro several more Rock Sparrows and a male Black Redstart were seen.  Just as we were making our way down the weather started to break and we saw the first sun of the day, two Griffon Vultures, Red-legged Partridge and Common Raven were added.  On the slopes in front of the main crags a single female type Spanish Ibex Capra pyreaica hispanica was seen.