Not many birds but what a trip

We woke to a peaceful morning and our hopes were high that our boat trip on the Strait of Gibraltar would not be cancelled as it was yesterday.  It was postponed though by one hour due to mist as it was thought pointless starting when we could not see anything.
The weather was calm with bright sunshine and we were advised to wear hats and put on suntan cream to protect us from the sun.  There were nine other members of ABS as well as Juliet and myself on this trip. 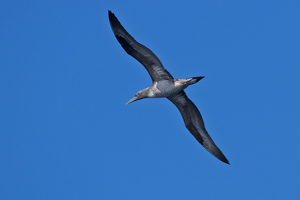 Alex Farrell, who was leading the trip, provided us with an outline of our planned journey.  The captain, Pepe, was initially taking us south-west to an area off the Moroccan coast where Moroccan fishermen in small open boats would be fishing for Atlantic Bluefin Tuna Thunnus thynnus.  This is also where we might see Orca Whale Orcinus orca, which also gathered to kill and feast on the Tuna.  From here he planned to turn eastwards and sail along the Moroccan coast to an area where we should see Long-finned Pilot Whales Globicephala melaena, Common Dolphin Delphinus delphis and Striped Dolphin Stenella coeruleoalba and Common Bottlenose Dolphin Tursiops truncatus.  From here the captain would sail northerly, back, across the Mediterranean Sea, to Tarifa.  Alex also informed us that there was a possibility of seeing Finback Whale Balaenoptera physalus and also told us to look out for the Ocean Sunfish Mola mola and Mediterranean Flyingfish Cheilopogon heterurus.

Alex also informed us that the birds we would probably see most of, other than gulls, were Cory’s Shearwater and Northern Gannet.  There was a possibility of seeing Balearic Shearwater, Great Skua, Storm Petrel, Leach’s Storm Petrel and Wilson’s Storm Petrel but we would have to be very observant or lucky to see the petrels. As we left the harbour we saw several Sandwich Tern feeding.  We also saw Yellow-legged Gull and Lesser Black-backed Gull flying around the harbour mouth. 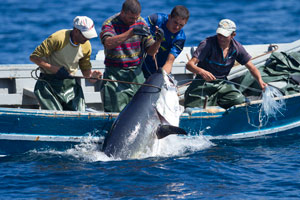 Further out in the Strait we began to see Cory’s Shearwater, which we then saw throughout the day.  Towards the end of the day we came across a group floating on the sea, which we were able to approach.
Occasionally we also saw a Balearic Shearwater, which were smaller and had a faster wing motion.  We also saw several Northern Gannet, both adult and juvenile and we also saw one adult Great Skua floating on the calm sea, which took off as approached.
The first large fish we saw was the Long-finned Pilot Whale.  There was a pod of about 30 whales.  There were large males, females and juveniles and they were swimming around the boat.

Eventually, we found the Moroccan fishermen fishing for Atlantic Bluefin Tuna.  I counted eight boats about five hundred metres apart.  The captain approached a boat where the four-man crew were pulling in their line and it looked as if they had something which was heavy attached to the end of it.  We waited about fifteen minutes while they pulled in their line – there was hundreds of metres of it.  Finally a huge Atlantic Bluefin Tuna appeared, which the captain said would weigh 250 to 300kgms.  The fishermen hauled it into the boat.  They initially tied a strong rope around its mouth to provide them with a more secure means of hauling it out of the water.  It took all four of the crew to get the tuna into their boat.

As we sailed across the Mediterranean Sea towards the Spanish coast we saw several pods of all three species of Dolphin we were hoping to see – Common Dolphin and Striped Dolphin and Common Bottlenose Dolphin.

Another fish we saw was the Tropical Two-wing Flying Fish Exoceutus volitans.  This is a fish that is able to jump from the water and fly short distances of up to 100 metres by stretching the pectoral fins and flying just above the surface of the sea.  It usually does this to escape from the many marine predators, such as dolphin, they attract.  Unfortunately when they come to the surface the Shearwaters can also be waiting for them.  Numerous observations now prove that these fish also pursue their flights when no danger threatens.  They probably do it for the joy of doing it.  When we saw them flying across the surface there did not appear to be any predators about. 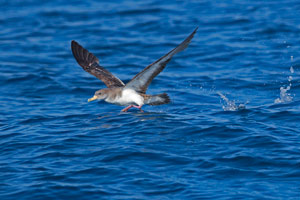 We also saw several Ocean Sunfish during the day.  Despite this fish being one of the heaviest fishes, they can grow up to three metres long and weigh 1400 kg, it has the brain with the size of a nut.  The skin is rough and hard (it can up to 15 mm thick).  The skin also hosts more parasites than any other fish, so although the Sunfish normally lives in the open ocean, they come to shallower areas to find other fish to clean their skin of parasites.  These fish also can be seen on the surface in open ocean having a sun bath and we witnessed this.  They lay on their sides and appear to be dead until you are close to them when they become upright and disappear below the surface.  On two occasions there was a Yellow-legged Gull floating beside the fish thinking there was a meal available.  One the interesting features of this fish is that it has no tail and uses the dorsal and anal fin for propulsion.

We returned to Tarifa at about 6pm having spent a wonderful day boating in the Strait.  I thoroughly enjoyed the trip but, although the Mediterranean was like a mill pond, unfortunately Juliet was seasick.  I will definitely do it again if I have the opportunity but I doubt whether Juliet will come with me.