We woke to a strong wind blowing from the east.  It had woken me earlier from my slumber in the Hostel Margarita where Juliet and I are staying over this ABS Field Meeting weekend.  Mick Smith is also staying in Tarifa and we picked him up at 09:15 on our way up to the Cazalles Bird Observatory.

There were six people there when we arrived, none of them from ABS.  It was after ten o’clock when twelve further members of the ABS arrived.  They were Frank Hair the ABS Trip Leader, Barrie and Jan Avis, Jerry and Barbara Laycock, John and Maureen Taylor, Jos Huismen, Freddy De Haas, Petrea Fastrup, Mogens Funch and Enrique Ysasi.

There were very few birds passing initially but eventually the raptors started to move through although not in great numbers.  The strong wind was interfering with the watching of the birds making it difficult to keep telescopes, binoculars and cameras steady.  In fact a couple of unattended telescopes were blown over. 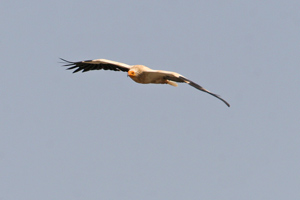 We stayed at the Cazalles Bird Observatory until about 14:00 when we felt we were unlikely to see any different species move through.  Also the strong wind did not show any signs of weakening.  It was the strong wind that we felt was the cause of the low number of birds that we had seen.

We drove from the Cazalles  Bird Observatory to La Janda, a distance of about 25km.  We stopped at the Apollo restaurant and bar to obtain refreshment before moving onto La Janda.  Two of the party had decided to call it a day so thirteen of us descended on La Janda. 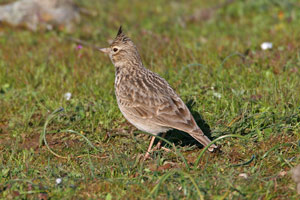 The weather was sunny and hot.  The strong wind we had encountered at the Cazallas Bird Observatory was not present in La Janda.  We entered La Janda via the track opposite the junction to Zahara de los Atunes and Barbate on the A-7.

On the way down to the bottom track we saw a Purple Heron feeding beside a water channel, which is used to get water to the rice fields.  The rice had not yet been cut.  There were male and female Stonechat perched on the wire fence beside the track, Swallow flying low over the rice fields and Cattle Egret feeding among the rice plants.

At the beginning of the bottom track we stopped and observed about six hundred White Stork in the distance with a small group circling in the sky above them.

Further along the track we spotted a juvenile Hen Harrier flying low over a field that consisted of bare soil.  It frequently landed in the field and stood on dried clods of earth and looked around.
In a field on the other side of the main drainage canal a farmer was using a tractor to drag an implement that was braking up the soil.  This had attracted over one hundred Cattle Egret who were feeding on the insects and crustacea that had been exposed.

As we drove very slowly along the track above the main drainage canal we saw an adult Little Egret feeding on the mud slope of the canal, a flock of about eight adult Goldfinch flying.  We also saw an adult Hoopoe flying and an adult Thekla Lark.

Beside one of the larger irrigation/drainage channels we watched an adult Grey Heron catch and swallow a large fish.  The fish was so large it looked impossible for the heron to swallow it, but it did.  During swallowing it had the appearance of a Shoebill, its mouth and throat looked so large. 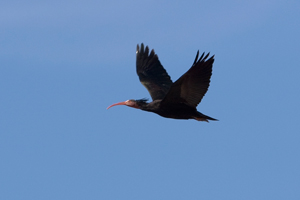 We turned off the bottom track and drove towards the farm on the hill.  On our right was a large grass field that contained about one thousand Cattle Egret, about two thousand Jackdaw and one Northern Bald Ibis.  Of course it was the Bald Ibis, which received all of the attention.  While we were watching these birds a male Common Pheasant flew across the grass field and into a neighbouring Sun Flower Helianthus annuus field.  Also perched on an electricity pylon we spotted a Black-winged Kite.

As we drove down the track to the exit of La Janda we saw eleven adult Mallard floating on the large drainage canal running south.
During our time in La Janda we also saw six adult Common Kestrel and also a flock of Spotless Starling.  In addition we counted thirty-six adult Wood Pigeon. 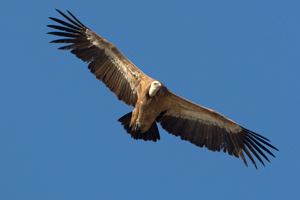 Next, we decided to visit Sierra de la Plata on our way back to Tarifa to specifically view the Swift cave.  Having parked the car at the side of the road below the cave, we enjoyed the panoramic views over Bolonia and across the Strait to Morocco.  European Honey-buzzard together with Griffon Vulture glided overhead on the thermals above the plain below us.  We also spotted a Northern Goshawk glide across the slope above the trees followed a short while later by a Eurasian Sparrowhawk and then a Common Kestrel.  On the rocks above us was perched an adult male Blue Rock Thrush.