Seventeen members joined Jesus Contreras for our February 2011 Field Trip, close to the seafront, in Retamar in the province of Almeria.  We were each given an information pack that included a check-list for the birds of Almeria and we also quickly, re-arranged our transport so that we were all accommodated in just four cars; all 4 x 4’s of necessity. 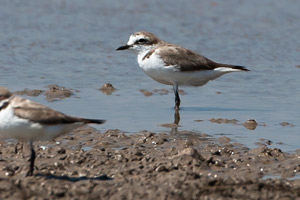 We soon headed eastwards along the seafront and onto a sandy and stony track along the shore.  Our first stop was at the old lighthouse, on the coast between Retimar and Cabo de Gata, where we were able to record both Ringed Plover and Kentish Plover plus a couple of Turnstone.  At sea we had our first Great Cormorant whilst behind us we had a single Common Magpie, a couple of Black Redstarts, Linnet, Hoopoe, Greenfinch, Meadow Pipit, Stonechat and a number of the group saw their first Wryneck of the year.  No sooner had we departed inland than we had our first Southern Grey Shrike of the day quickly followed by Thekla Lark, White Wagtail and Collared Dove.  Also some of the group spotted a Merlin flying low and fast over the scrub and around bushes.

We travelled on along sandy tracks and soon added small flocks of Short-toed Larks plus Crested Lark and even a few Calandra Larks to our sighting list.  Greenfinch and occasional Goldfinch were also seen and some members of the group remarkably saw three Crossbills; who would have expected to find these birds in this habitat? 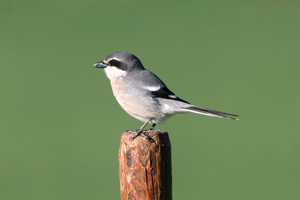 Taking a private track further into the dunes “scrub land” we were immediately rewarded by first a pair, then a trio and finally a small flock of ten Black-bellied Sandgrouse.  From the same position we then watched a Short-toed Snake Eagle being mobbed by a Common Kestrel, another good-sized flock of Short-toed Larks and a single Western Marsh Harrier.  In addition we also recorded Spotless Starlings, White Wagtails and Swallows.

The road leading to the camping site proved very exciting; all four cars stopping and a mass evacuation taking place to watch the flypast and descent of four Common Cranes.  This occurred just after spotting our first Whinchat of the year.  Just to add to the fun, we even had a very small number of Skylarks in this area.

Continuing onwards via track and road we soon came to Rambla Morales, a small truncated river beyond the camping site.  We were soon adding a range of water birds to our sighting list including Moorhen, Eurasian Coot, Black-winged Stilt, Mallard, Northern Shoveler and Eurasian Teal.  Closer inspection soon revealed a few White-headed Ducks, a solitary Little Grebe and three Black-necked Grebes.  Over the water was a mixture of Swallows and House Martins plus a single Eurasian Crag Martin.  In the nearby bushes and shrubs of the riverbank were numerous Common Chiffchaff and at least one Western Bonelli’s Warbler. 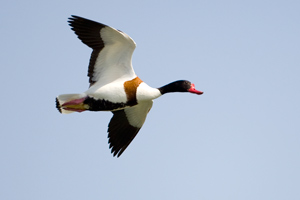 A party of twenty-five Curlew flew over and above the far bank, which drew our attention to the resting Audouin’s Gull in the middle of the lagoon.  Finally, we took the beach track to Cabo village for a very prolonged lunch passing a large flock, well in excess of a hundred, European Golden Plover.  While lunch took place we added House Sparrow, Northern Gannet, Sandwich Tern, Yellow-legged Gull and Sanderling to our list.  Also another Audouin’s Gull glided overhead.

We all then made our way to the Cabo de Gata saltpans in readiness for our next feast of birds.  Most of our time at the saltpans was spent at the western end from the hide near the main road.  Before long we had identified over a hundred Greater Flamingos and good numbers of Avocet and two Curlew Sandpipers.  Both Black-tailed Godwit and Bar-tailed Godwit were to our right plus a single Spotted Redshank and two Common Shelduck.  By the time we had finished our visit to the next hide we had also added Little Egret, Grey Heron, Great Cormorant, Black-headed Gull, a Grey Plover and that most delicate of birds, the Slender-billed Gull.

Rather than visit the public hide and, perhaps, add a few more waders to the list, we moved on to the Cabo de Gata lighthouse and were rewarded for our trouble by more Northern Gannets, Yellow-legged Gulls and a Lesser Black-backed Gull plus a lovely sighting of several, Trumpeter Finch.  Then it was off up the single track to the observation station at Vela Blanca.  On the way up we added Blackbird, Sardinian Warbler and Collared Dove to our list.  Arriving at Vela Blanca we were faced with magnificent views, overlooking the bay below and beyond.  As our attention returned to birds we realised that on an outcrop in the bay below where two Mediterranean Shags, which were gladly added to the list.

By now the day was rapidly ending and the light going so we made the decision to check out a favoured site for Dupont’s Lark.  Even with a little electronic encouragement we were unable to locate an individual but we did find another large flock of European Golden Plover that were settling down to roost for the evening.  We then went to a neighbouring site to see if, in very bad light, we could find roosting Dotterels that had been seen in previous days, but were unsuccessful.  Our last sighting, other than some magnificent Hares, was of a Southern Grey Shrike standing sentinel from a high bush top overlooking the surrounding fields.  So ended a wonderful day’s birding.

A big thank you to Jesus Contreras for a very well organised day and for sharing his extensive knowledge of the flora and fauna of Almeria.