The group met at the mirador above Ventas de Zafarraya at 09.30 for a prompt 10:00 start.  The weather was already hot and sunny with a clear blue sky.  Eight of us turned up, including Bob Wright who had organised the trip.  We enjoyed a day of beautiful scenery, good company, a fair number of birds and good food. 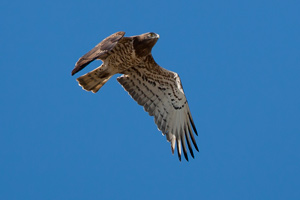 Whilst in the car park at the mirador we saw our first bird which was a perched, singing, Rock Sparrow followed by a single soaring Short-toed Snake Eagle.  Also there was a flock of House Sparrow flying about.  From the car park we walked along the old railway track, through the tunnel, to the ruined railway cottage about a kilometre beyond and back.  Approaching the tunnel there were a large number of feeding House Martins overhead and a couple of Blue Rock Thrushes and Black Wheatears high on the rocky slopes.  On the lower slopes there were a number of feeding Goldfinches including many juveniles.  On the other side of the tunnel we saw more Goldfinch and the first of many Stonechats.  Overhead, was a pair of Short-toed Snake Eagles and later two single, Booted Eagles.

As we walked along the railway track, taking advantage of the little shade that was available, we saw both Sardinian and Dartford Warblers among the scrub and bushes on the lower slopes.  We had also been hearing European Bee Eaters but had not been able to spot them, but as we approached the ruined railway cottage we saw the arrival of a small flock of twenty plus European Bee Eaters on the slopes above us.  Some obligingly perched on an overhead cable.  While we were watching the European Bee Eaters we also saw more Sardinian Warbler and a single Melodious Warbler with its beautiful yellow breast. 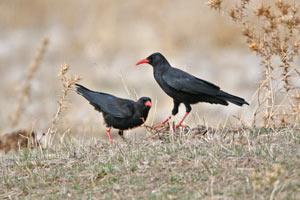 There were also a couple of male Blackbirds spotted.  On our walk back, as we were approaching the tunnel, we heard the arrival of at least twenty Chough and we stopped and watched them flying around the craggy mountain-tops.  Also there were more feeding hirundines, on the slopes but this time mostly Eurasian Crag Martin with the occasional Swallow.  Just before re-entering the tunnel, a lone male Black Redstart stopped for a short rest on the side-wall.  On the other side of the tunnel we watched more Chough above us and then it was off to the former “estacion”, now a bar, for a well-earned coffee.

After our coffee we set off on a country drive towards Alhama de Granada.  It was a very quiet drive through the wooded area with not a single Azure-winged Magpie on our journey but a diversion to the Cortijo Pilas de Dedil on the track towards the Sierra Loja did produce a Common Magpie, a Thekla Lark and Black-eared Wheatear.

Finally, it was to the old part of Alhama de Granada to have a very good lunch and afterwards taking a look at the gorge that runs through this fascinating old town in Granada Province.  In the gorge we saw a large flock of resident Rock Doves plus a pair of Jackdaws, a good-sized flock of Spotless Starlings and at least two Red-rumped Swallows.  Also we saw two, Serin and another small flock of Goldfinch.

Our final destination was the pantaneta above the town of Alhama de Granada where we there a number of Eurasian Coot, both adult and juvenile.  There was also a single Moorhen and Little Grebe and a few Pochard and three young Mallard. 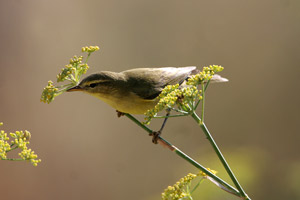 Feeding over the water were large numbers of House Martins including many juveniles and Red-rumped Swallow plus a smaller number of Swallow, at least one Sand Martin and a single Common Swift that popped in for a drink from the surface of the water.  A Spotted Flycatcher also perched close to the hide and demonstrated its ability to catch many flying insects.  A short walk in the small wood at the side of the pantaneta produced Wood Pigeon another Spotted Flycatcher and we could also hear Coal Tits in the tree-tops but could not see them.  As we were leaving the wood we also had close views of a Willow Warbler.  As we were leaving the pantaneta at around 17:30, on our way home, we saw a Collared Dove and a pair of White Wagtails on the dam and this gave us 39 species for the day.  A list is attached which shows all the birds we saw.