A bird in the hand, worth 2 in the bush 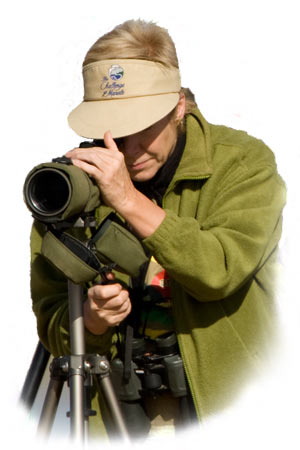 It always amazes me that when you see birds in the hand they invariably seem so much smaller than you would think. Of course, that’s the result of usually observing birds through binoculars. The opportunity to view birds in close-up was just too tempting to miss. Of course ringing is an important aspect of birding, and we are lucky to have licensed ringers in our membership.

Saturday 25th August
On 25th August nine of us crawled out of our beds, in the pitch black, to go off at 7:00am to observe the ringing process up close. Peter Jones, ably assisted by Frank Hair our Field Trips Officer, and togged out in rather fetching welly-boots, set up a large mist net across the upper reaches of the Rio Guadiaro. The spot is just one of the many superb birding sites within the Serrania de Ronda, just off the Benaojan road below Ronda.
Peter always puts the safety of the birds first; for example, he will not ring on a day with strong wind. This is because in places of overlap, the net is doubled, and birds could get a nasty neck lengthening if they’re unlucky. I’ve missed-out on ringing before because of that premise; too much wind. The 25th was perfect, however, and soon we were watching from a distance as Franky and Peter carefully untangled the first birds and put them in special cloth bags to bring to the ringing table. Because of the stress to the birds, they aren’t left more than 15 minutes in the net, and afterwards are ‘processed’ as quickly as possible.

Records
The records kept, and later submitted to SEO in Madrid (the Spanish Society for Ornithology), are as follows; ring number., species, juvenile/adult, sex, total length of wing, length of third primary feather and fat condition. Other details, which are sometimes, recorded are; weight, moult score, wing formula for
similar species, and muscle scores. Each country throughout Europe operates their own ringing schemes and central databases. However, all contribute their data to a central ringing database held and administered by the BTO at Thetford in the UK. The scheme is called Euring (www.euring.org).

The Birds
First out of the bags were two juvenile Grey Wagtails; unsurprising really considering our situation. Even young birds show the bright yellow vent area and yellow/green rump, although the facial markings are less clear and the breast is more buff than yellow. The birds are gently but firmly held on their backs, which keeps them calm whilst being handled. The wing measurements are taken and noted, and the breastbone felt to assess muscle condition, which if the bird is about to migrate over long distances is important. Generally, if it’s sharp with little muscle padding, the bird has arrived from quite a distance north. For the wagtails, however it was likely that they were fledged thereabouts. So, on with the new ‘ring’ and away they go. I have to say that I find it hard to watch the ringing itself; the incredibly thin leg in the ring clamp just terrifies me, though Peter showed us how the construction of the clamp prevented any injury to the bird.
Next out were two lovely blue juvenile Kingfishers, one male, one female. Peter explained that females’ lower bills have almost one third red, towards the base. Males show very little red. We also found out that juvenile birds have a lot of grey on the tops of their feet, whilst adult birds have all red feet. In fact a special narrow ring is used for Kingfishers because they have a very short tarsus, or lower leg. After ringing, Peter held the birds by the legs to show us the strange head swiveling that they perform. They look just like wind-up toys! Why do they do it? Possibly as a distraction to predators, but no one really knows. On release the birds dazzled us all with their iridescent, cobalt blue rumps and tails. 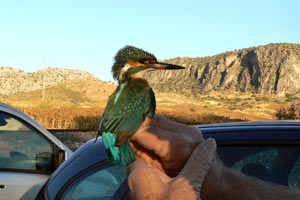 From the next sweep of the net came a third juvenile Kingfisher. These birds may have been fledged here or may have migrated here from further north. Some Kingfishers do migrate south for the winter. The sweep after that produced a Juvenile Goldfinch, three adult Willow Warblers, and a Great Tit. At this point I have to confess that I once spent a good half-hour wondering what the bird with the yellow wing patches was. I was with another member who shall remain nameless. Eventually it dawned on us that it was a young Goldfinch, which hadn’t yet developed the ‘embarrassed’ red face of an adult, so I now know what a juvenile Goldfinch looks like!  I took Peter’s word for it that we’d netted Willow Warblers not Chiffchaffs (they have darker legs normally), but the scientific method of emargination on the 6th primary, which Peter tried to explain, goes right over my head. The Great Tit was a male, as shown by the wide black stripe and belly patch on his front. Females have much less black.
By now we were seeing a pattern; almost all the smaller birds flew straight to a nearby tree to investigate their new jewellery. Then after a few pecks they dismissed it, and flew off unconcerned. Next up was a treat; a Green Sandpiper. And it was this bird which most prompted my earlier comment about size perception. It seemed quite small. It was an adult male, with the diagnostic bright white rump and clear broad bars on the tail. To me these are beautifully proportioned birds with long elegant legs, which as a wader, get ringed on the thigh. It’s thought to be safer to ring waders on the thigh, or tibia, because it’s often in contact with vegetation, and has the advantage of making the ring more visible for scoping/reading when the bird is in water or mud. 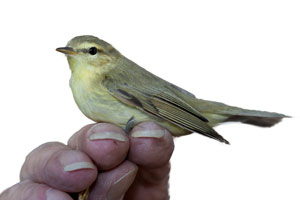 The next birds to fly into the net were an adult male Serin, showing very yellow and a nicely coloured male adult Chaffinch. The next two sweeps produced three more Willow Warblers, and at this point Peter showed us how the wing length indicated how far the birds migrate. One, with the longest wings that Peter had ever noted, had surely arrived from the far North. The last bird of the day was an adult male Kingfisher, demonstrating his all black bill and glorious blue backside.
We shut up shop at around midday as, despite the shady riverside, the heat was starting to get to us, and making the birds less mobile. On to a nearby venta for lunch then back home for a needed zzz.
I missed the second day of the event but I know that they managed to snag the Cetti’s Warbler that had been taunting us from the riverbank all the previous day. Also, a Western Olivaceous Warbler, both of which I would’ve loved to see to improve my warbler ID skills, which are sadly lacking.

Other birds of interest
Other birds seen around the river: flocks of Rock Sparrows, a juvenile Stonechat, four Grey Herons on a fly-past, Hoopoe, lots of Greenfinches on the sunflower field next to us, Collared Dove, Griffon Vultures over the mountains, and of course House Sparrows. An interesting pair of Booted Eagles was sparring overhead; one was the typical pale form and one, the dark phase, which to my unskilled eyes looks like a different bird entirely.

Thanks to Peter Jones and Frank Hair for educating us all and to my fellow members for their company: Barbara Vagliano (our US member!), Barbara & Jerry, Liz & Geoff, and Mrs. Peter i.e. Brenda.