We left our hotel, the Hotel Nuevo Portil Golf, at 09:00 on Saturday February 20 2013 so that we could meet Manu Mojarro our guide at the Anastasio Senra Visitors Centre at the Odiel Marshes Nature Reserve by 09:30 for our February Field Meeting.  By 09:45 thirteen members of ABS had arrived. 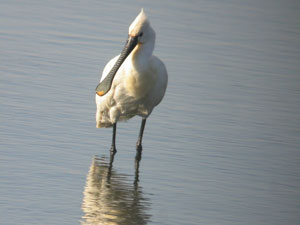 We started by looking at the river banks of the Río Odiel as the tide was low exposing lots of muddy shore.  There were lots of birds and here we saw a Curlew Sandpiper feeding with Dunlin.  There was also a Curlew feeding and close by were two Whimbrel so it was interesting to compare these two similar birds.  Similarly, there were Bar-tailed Godwit and Black-tailed Godwit feeding together and Manu was able to explain how to tell the difference between the two species when they were on the ground and you could not see their tails.  Other bird species feeding on the muddy shore included Black-winged Stilt, Ringed Plover, Redshank, and Grey Plover.  At the edge of the river, in shallow water, were a small group of Avocet and perched on varies objects in the river were Lesser Black-backed Gulls and Great Cormorants.  Quite a few of the cormorants were in breeding plumage with beautiful white plumes showing on their heads and necks.  Swimming and feeding in the river was a Black-necked Grebe and flying above the river were two Sandwich Terns.
We then walked around the back of the Visitors Centre to two lagunas.  During this walk Manu educated us about the history of the city of Huelva and also about how the Odiel Marshes were formed.
On the lagunas we saw Little Grebe, Black-headed Gulls, Northern Shoveler, Gadwell, Mallard, Eurasian Teal, and Eurasian Coot.  Above the lagunas there were Swallows flying and feeding.  We scanned the coots with our telescopes but could not turn any of them into Red-nobbed Coots. 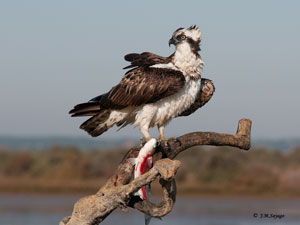 Next we set off in three vehicles to explore the Odiel Marshes.  We drove along the road towards the sea with Manu in the lead and stopped whenever there was anything to see.  The first habitat we drove through were saltpan pools surrounded by muddy banks, with some of the banks covered in vegetation.  Between the saltpan pools there were also water channels bordered with dense vegetation.  Here we saw Slender-billed Gulls floating on the surface of the saltpan pools picking insects from the surface with their slender bills.  Some of these birds had a definite pink hue to their breasts showing that their breeding plumages were beginning to grow.  We also saw several Great Egrets and Grey Heron feeding in the saltpan pools and water channels.  Feeding in the shallow saltpan pools were several Common Greenshank, a few Black-winged Stilt and lots of Redshank and Greater Flamingo.  In addition there were several White Wagtail feeding along the edge of the pools.  On the saltpan banks we saw a large group of Eurasian Spoonbill, a big group of Stone Curlew and the occasional Great Cormorant.  In the dense vegetation bordering the saltpans and water channels we saw Common Chiffchaff, Stonechat, Sardinian Warbler, Dartford Warbler and a Cetti’s Warbler.
The next habitat we came to was marshland and shallow marshland pools.  Here we saw more waders, lots of Dunlin, Bar-tailed Godwit (we were now all experts at identifying this species) and Redshank, lesser numbers of Ringed Plover and much lesser numbers of Grey Plover, Sanderling and Common Snipe. 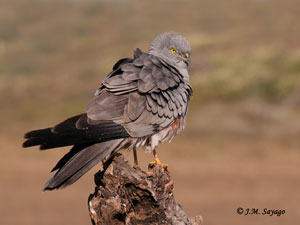 Flying over this habitat or perched in a prominent place were several Osprey.  Manu told us about the Osprey introduction programme, which was started eight years ago, and its successful breeding of Osprey chicks in 2009.  He also pointed out where the initially birds were caged, overlooking the marshes so they would become familiar, before they were released.
Also flying over this habitat were Western Marsh Harriers including a beautiful adult, male bird.  We also saw the occasional Great Egret and Grey Heron and continued to see Common Chiffchaff, European Stonechat, Sardinian Warbler and White Wagtail.  Three additional species we saw here was a Hoopoe flying past, quite a few Corn Bunting perched where ever there was a post, singing and Common Magpie flying past.
Over both of these habits we also saw flocks of starling flying.  They certainly consisted of Spotless Starling but we could not definitely tell whether there were Common Starling among them.
The next habitat was sand dunes, short grassed sandy areas, shallow sandy pools and the sandy shore of the Río Odiel estuary.  In the sandy pools we continued to see lots of Dunlin, Redshank and Bar-tailed Godwit and much lesser numbers of Grey Plover.  Also a single Caspian Tern stood at the edge of one of the sandy pools.  We also saw another Curlew and more Whimbrel.  In addition, at the edge of these pools and the edge of the river estuary, we saw Oystercatcher, where we were able to compare birds that were in breeding plumage with those that weren’t, and Kentish Plover.  In the sandy grass areas Crested Lark were present as well as Stonechat and Common Chiffchaff. 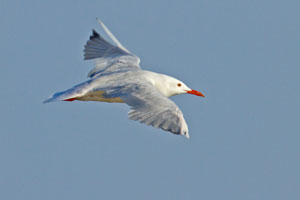 On the estuary shore as well as the waders already mentioned there were Sanderling and there were large numbers of Lesser Black-backed Gulls and the two sub-species graellsii and intermedius were present.  There were also lesser numbers of Yellow-legged Gulls and Black-headed Gulls, a few of which were in full breeding plumage.  In among a large flock of gulls was a single Audouin’s Gull.  Great Cormorants flew up and down the river and an occasional Sandwich Tern flew past.
Next, we returned to the Visitors Centre and had our picnic lunches.
Following lunch Manu took us into a restricted area of the marshes.  He could only take his own vehicle in, so some of us started to walk in and he returned to pick us up.  The first habitat we encountered was that of the saltpans, which I have described previously.  Here we saw more of the waders I have already mentioned plus a few Little Stints, and two Turnstones.  We also saw several large flocks, containing up to thirty birds, of Black-necked Grebes swimming together on the saltpan pools  There were Common Shelduck also swimming on the saltpan pools and four White Stork circled overhead.  Flying past we saw another Osprey and also a male and female Western Marsh Harrier.  In the thick vegetation bordering the saltpans and water channels we saw Common Chiffchaff, Sardinian Warbler, Dartford Warbler and an adult male Bluethroat. 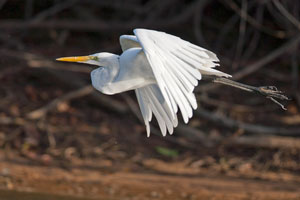 The next habitat we were taken to was a fresh water pool on the edge of a coniferous wood.  We were able to sit in a hide and watch a large number of Eurasian Teal, Common Snipe and Mallard feeding.  There were also some Eurasian Coots and Moorhen.  Around the edge were two Green Sandpiper feeding.  In the shrubs bordering the pool were Common Chiffchaff and flying over the pool were Swallows and House Martins.  In the distance was perched an Osprey eating a huge fish.
We returned to the Visitors Centre and followed Manu to another birding site, which was close to our hotel – Laguna El Portil.  This was also a freshwater pool situated on the edge of a small town called Portil.  Here the most common ducks were Pochard and Northern Shoveler.  There was also a pair of Red-crested Pochard and a pair of Tufted Duck.  Also on the laguna were two Little Grebes, six Yellow-legged Gulls and a Great Cormorant.  We watched the cormorant come to the surface with a large fish.  The fish was so big that you could not believe the cormorant could swallow it.  But, after a struggle,it managed it.  We could see the bulge of the fish in its neck.  After several gulps of water the fish slivered down and the cormorant flew away.
We also saw Common Chiffchaff and House Sparrows in the bushes around the laguna.  Above the pool we had Swallows, House Martins and Sand Martins flying and feeding.
Unfortunately, our birding day had come to an end and we all had to say our goodbyes.  It had been a very enjoyable and informative day.  Thank you Manu.