Twenty-two of us arrived at the Venta Las Vegas in Osuna for 10:00 on the Saturday morning of March 23, 2013 for our ABS March Field Meeting.  Unfortunately the Venta had decided to close that morning – someone had tipped them off that we were coming.  Frank Hair, the Trip Leader, soon had us organised and a car convoy set off from the Venta along the SE-715. 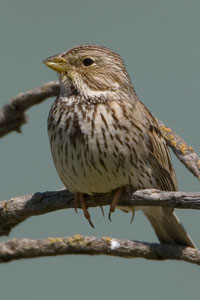 This road took us away from the town of Osuna and into the surrounding flat farmland.  The road followed the railway track and in particular the foundations that have been constructed for the eventual laying of track for the AVE high-speed train.  The reason I mention this is because they also built a number of high road bridges to take the SE-715 and dirt tracks connected to the SE-715 over what will be, the AVE train line and we used these bridges as observation points to view the flat surrounding farmland.
The weather was bright with a cloudy sky, with darker, denser clouds on the western skyline.  There was also a mild wind.
As we left Osuna we saw the first of many sightings of Crested Lark and Corn Bunting.  As we drove along the road we encountered our first raptor of the day, a female Marsh Harrier, quickly followed by a large, female Montagu’s Harrier.  At the first bridge, you could feel the expectation that everyone was radiating with regard to seeing the elusive Great Bustards and the disappointment when there was none.  However, we did see another female Marsh Harrier, a Common Buzzard, a Grey Heron and a pair of Mallard in the same grass field.
At the second bridge we saw a male and female Montagu’s Harrier flying above a green field, two female Marsh Harriers, a perched Corn Bunting in full song, a Whitethroat performing a display flight to and from a fence post it was perched on, two male and a female Spanish Sparrow, a single male House Sparrow, a Red-legged Partridge, Crested Larks and Corn Buntings, but still no Great Bustards.
At the third bridge we saw ten Alpine Swift with a Pallid Swift among them, a Stone Curlew, a male and a female Marsh Harrier, a Red Kite, three Black Kite, a male Hen Harrier, two male Montagu’s Harriers, two Red-legged Partridge, two Goldfinch, a Greenfinch, a Hoopoe, more Crested Larks and Corn Buntings – but no Great Bustard.

Then someone shouted “Great Bustard”. 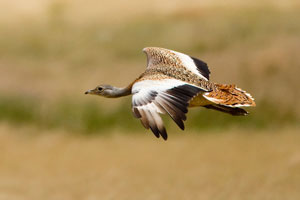 There was great excitement as everyone turned to where it had been seen so they could see it also.  But it had only been a fleeting glimpse of a flying bird and it had quickly disappeared in a large patch of Olive trees before the majority of the group had seen it – Oh the frustration.  Then there was another shout of “Great Bustard”.  This time it was of a displaying male, but it had strutted out of sight before the majority had seen it.  There was now despair and in some cases a resignation that they would not see a Great Bustard on this day.
But in the distance there was the fourth bridge and someone suggested we drove to it as it may provide a better view of the field from which the flying bird had come and within which the displaying bird had been seen.  It was more like a Le Man race start.  People running to their cars and racing off to the fourth and last bridge to be the first to see a Great Bustard.  When we got to the bridge there was joy and excitement because in the field there were six males and five female birds. Although they were some distance away everyone could clearly see them with their binoculars and orderly queues were formed at the telescopes so better views of these magnificent birds could be obtained.  While we were watching the Great Bustards, three Black-bellied Sand-grouse flew overhead and across the fields.  There were also three Northern Ravens flying around as well as more Marsh Harriers and Montagu’s Harriers, a Lesser Kestrel and Black-winged Kite. 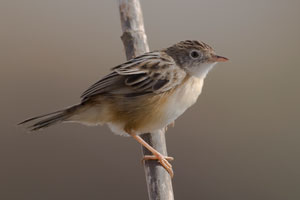 We also watched a juvenile Grey Heron fly past and saw a flock of Spotless Starling, a male Blackbird, a Collared Dove, and more Crested Lark and Corn Bunting.  Before leaving the bridge we had also recorded Swallow, House Martin and Red-rumped Swallow.
With everyone’s appetite for Great Bustard fulfilled and the rain starting to fall we started to think about our appetite for food and headed off to the town of La Lantejuela for lunch.  On our way we passed a group of farm buildings close to the road where there were about twenty Lesser Kestrels.  There were also two members of SEO catching the Lesser Kestrel in a net and ringing them.  In fields on the other side of the road a flock of Calandra Lark were observed.
Before getting to the restaurant we also visited a small nature reserve on the edge of La Lantejuela where there are six pools, but it was unfortunately closed.  But from an observation rooftop at the entrance we saw four Moorhen, a male and female Northern Shoveler and a Common Chiffchaff.  On our way from the pools to the restaurant we saw a White Stork flying overhead with nesting material in its bill.  The rain by now was very heavy.
We went for lunch at the Bar Restaurant Roberto Rios arriving at 13:15 and left at 14:45.  It was still raining but not as heavily.  We left La Lantejuela on the SE-708 and at around 15:00 we entered the Reserva Natural Lantejuela and visited Laguna Ballestera.  Here we saw about eighty Northern Shoveler and about a hundred Greater Flamingos feeding on the laguna. 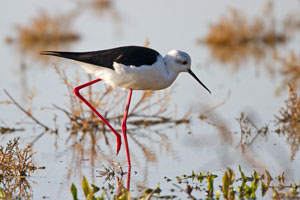 There were also a small number of Black-headed Gull, about twenty Eurasian Coots, twenty Black-winged Stilt and six Avocets also on the laguna.  Some of the Eurasian Coots were fighting, lying on their backs on the water and fighting with their feet.  Around the edge of the laguna we saw a Little Ringed Plover, a Kentish Plover and five Iberian Wagtails.  Flying above the laguna was about fifty Swallows, thirty House Martins and few Red-rumped Swallows.  Also flying over the laguna we spotted a Red Kite, a beautiful male Marsh Harrier and a three Stone Curlew.  There were also Corn Buntings, Crested Larks and four Skylarks.  In fields close to the laguna we saw another adult, male Great Bustard and a Woodchat Shrike perched in a bush.  In a tree close to the laguna was a male Eurasian Blackcap.
We rejoined the SE-708 and drove to another laguna called Laguna de la Turquilla where we parked at the side of the road.  Despite the rain our attention was immediately taken with a large group of Red-crested Pochards.  The male birds looked splendid.  There was also a pair of Mallard, a large number of Eurasian Coots and four Little Grebes.  We also heard a Cetti’s Warbler calling and a Zitting Cisticola.  Above the laguna were large numbers of Swallow and House Martin feeding with a lesser number of Pallid Swifts.  Among the Pallid Swifts we counted four Common Swifts.  As we were preparing to leave a flock, containing at least three hundred Greater Flamingo flew overhead.  A fitting sight to the end of a very good days birding. 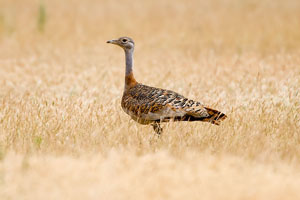 We joined the A351 back to Osuna and Venta Las Vegas.  On our way we drove past Laguna de Calderon and as we drove past we saw a male and female Common Shelduck swimming together.  Some of the party stopped here and found more Greater Flamingos and Northern Shoveler but, in addition, they also managed to find both a Black-necked Grebe and a Great Crested Grebe plus a Green Sandpiper.  However, their best sightings were a distant Osprey and a passing Peregrine Falcon.
The rest of the group travelled on to the Venta where everyone parted for their journeys home.  Despite the rain everyone had a very good day of birding and it will take them a little while before they forget that shout of “Great Bustard”.